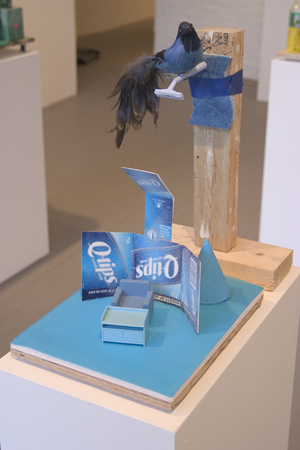 The press release that accompanies Nancy Radloff’s solo debut at Outrageous Look features a conversation between Gallery Director Brook Bartlett and the artist. It deals matter-of-factly with the artist’s bout of mental illness as a student at Cal Arts. Radloff discounts the effect of the experience on her new work, claiming, “Now we are talking about my illness, because of writing about my work, but on an everyday level, I don’t identify with that now.” Nevertheless, the press release characterizes Radloff’s work as, “…vaguely threatening dioramas of the soul in alienation.”

After reading the press release and then looking at the work, I wondered if I was at the right exhibition.

The one I saw opens with four monochrome dioramas resting on top of a set of evenly spaced pedestals. There’s a red one, a green one, a yellow one, and a blue one. They hardy seemed threatening or alienating; in fact, my first impression of Radloff’s exhibition was that, in spite of its shabby components, it all felt rather sensible and congenial. It looked to me as if she was more inclined to mitigate the potential threat of her wild objects rather than to draw attention to them. I felt a little guilty about not feeling menaced, but that’s the problem with reading the supplemental literature for art exhibitions: it has a way of leading the experience no matter how hard you try to discount it.

The blue diorama, entitled, “Bird” (2006), features an ornamental bluebird perched on a disposable lady’s razor jutting out of an abrasive kitchen sponge. The bird sits a little cock-eyed about ten inches above what appears to be a miniature talk show set sponsored in part by Q-tips cotton swabs. All the elements in the sculpture are in tonal accord, down to the plastic foundation on which the set rests. The same holds true for “Sunrise” (2006) in which Radloff assembles a similarly motley collection of mundane yellow objects: a copy of the Yellow Pages on a raw piece of birch plywood along with a Tony Feher-esque 20 oz. bottle halfway filled with liquid the color of antifreeze. On top of the phone book, empty yellow boxes of trash bags and Kleenex are casually stacked and crowned, in a repetition of the bird motif, with a fantail of yellow Heftysack box tops.

My first reaction was to think of Radloff’s assemblages of junk in the tradition of Robert Rauschenberg’s Combines—a little more delicate and well-behaved, perhaps. As I viewed it, the work’s character changed, becoming less about the disparity of her materials than about the consistency of the color. More about control than spontaneity, more Bower Bird than Rauschenberg in her obsessive assembling of assorted debris into a collection of monochromatic nests.

Each construction in the exhibition, including “Biting on Soap” (2006), a sculpture made from a cut-away shower stall is so obsessed by color uniformity that the individual properties of its components—cigarettes, bleach bottle, plant hooks, etc.—are homogenized, whitewashed, and ultimately sacrificed for the sake of the monochromatic whole. This is a very unusual practice in a contemporary art scene in which commercial packaging would more likely act as an avenue into a discussion of media, authenticity, or popular culture. Of the countless attributes possessed by, say, a box of Q-tips, its powder blue color wouldn’t ordinarily be seen as its most salient and profitable artistic characteristic. Radloff’s attempt to conflate found object sculpture and minimalist monochrome is admirable, inventive, and, in the case of this exhibition, wholly enjoyable.

But to return to the above-cited interview, there is a powerful sense in Radloff’s work that she is desperately trying to establish some kind of order in the face of disorder. Her dioramas seem to be inspired by an underlying neurosis, and their finished forms feel therapeutic in their orderliness. Although they are self-sufficient as art objects, you can’t help but think that the act of gathering and sorting is as important to Radloff as the finished product.

In the end, it’s clear that Radloff’s work is capable of speaking for itself. The conflict between the words and the work in this exhibition is indicative of the potential that psycho-biographical information has to affect art. It says a lot about the relationship of the artist to the viewer and how important the terms of exchange are to content. I think it’s safe to say that if an exhibition is worth the time it takes to experience it, as Radloff’s is, it will be more successful if it shows more than it tells.