Eve Sussman & The Rufus Corporation with an original score by Jonathan Bepler
The Rape of the Sabine Women IFC Center February 22–27, 2007 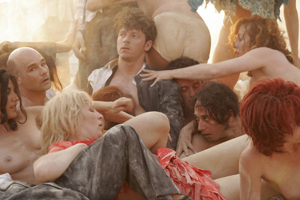 Eve Sussman, still from The Rape of the Sabine Women (2005).

Lust and Debacle seem to be on the mind of a coterie of avant filmmakers these days. First there was the Whitney Biennial and Francesco Vezzoli’s _Trailer for a Remake of Gore Vidal’s “Caligula,” _ which used fresh man juice as skin crème, then Matthew Barney’s _Drawing Restraint 9, _ where Bjork and Barney sliced and gobbled each other up alive, and now Eve Sussman’s _Rape of the Sabine Women, _ an 82-minute visual musing on the look and feel, if not the actual rape, of the ancient Sabine women. Sussman, along with composer Jonathan Bepler, choreographer Claudie de Serpa Soares, vocalist Savina Yannatou, an ensemble of actors, dancers and musicians, hundreds of extras, and a real wolf loping through the halls of the Pergamon Museum, has made a work that takes on art history, the film industry, and even pokes at gender inequality. Sussman chronicles the plight of the Sabine women, presenting them as 1960’s butchers’ wives callously abducted to a Maria Callas style exurbia before ending up in the middle of a horrific battle between kith and kin.

Since there is no spoken dialogue, Sussman focuses on nuance, gesture and corner of the eye observations, deftly manipulated by reflections in glass and mirrors that evoke dreams, allusions, illusions, and metaphor. Rape is not an easy film and requires a sophisticated, engaged viewer, otherwise the allusions, analogies and interpretations could fall asunder. Its locations skip from the Pergamon Museum, to the Berlin Tempelhof Airport, to the gory Athens meat market—stuffed with enough hacked and freshly skinned flesh to be its own metaphor—Nikos Valsamakis’s sleek International Style utopian house overlooking a tranquil blue sea, to Athens’ Herodeion, the theater built ca. 160 CE by Herodes Atticus as a memorial for his wife. According to Sussman, even the venerable Woody Allen was unable to secure that site.

Not being proficient in my ancient Roman history, I read an account of the Rape of the Sabine Women from the 1st Century BCE by the historian Livy. In short, by the 8th Century BCE, mighty Rome ruled, but there were no women to propagate the species. Spies were sent out to neighboring communities, beauties located, marriages sought and in all cases rebuffed. Miffed, Romulus, the king, held a huge citywide open house, including sporting events, and made sure to invite all those principalities that had spurned his overtures. When the games were in full swing, he sent his warriors out to abduct the women, notably the women of Sabine, in full view of their families. Romulus then visited the despondent maidens, explaining it wasn’t all that bad; their new husbands would love them and treat them like queens. Nevertheless, the girls’ newly bereft parents declared war on Rome. Aghast that their new Roman husbands were fighting their fathers and brothers, the Sabine women pleaded to the armies to stop the slaughter, which they did, and peace was restored.

Art history, the real star of the film, appears as an aged, bedraggled Pergamon Museum guard, crackling the pleats of his pants as the Cough Chorus singers (no joke) harmonize their hacking and wheezing against a sculptural backdrop of battling Titans and Olympic gods. Sussman’s Steadycam lens caresses these antiquities, reminding us that without great works of art such Jacques-Louis David’s Intervention of the Sabine Women (c. 1799), the inspiration for the film, she would have no visual themes on which to anchor the movie.

The Sabine women enter singing at Berlin’s Bahnhof dressed in 1960s haute couture. The first hint anything is awry comes at the Athens meat market, bloody carcasses and innards everywhere, when a woman lets go of her husband’s hand and another man snatches it, then her. When the scene switches to Nikos Valsamakis’s modern villa overlooking the Greek seaside where the women lounge in pricy, louche fashions, the film stock changes from grainy to bleached to sepia to shockingly realistic. The women’s ennui is contagious. Sussman said Valsamakis’s utopian house is symbolic of collapse of Rome’s heyday, but the analogy, though fetching, eventually wears thin.

The conclusion, an epic, Spartacus-like scene with 800 participants, takes place in the open air Herodeion, with a slo-mo operatic finale of men in conservative business suits tussling with each other. The Steadycam bobs and weaves through the battle as the women’s Pucci dresses are ripped off their backs. The film bleeds to black-and-white, then faded color as Sussman steps away from her mythmaking to allow the actual cameras flashing in and out of the billowing smoke to be part of the action. A haunting vocal by Savina Yannatou evokes the ancient memory of the Rape, echoing throughout millennia as a violation of the ordinary, a forced impregnation with foreign seed. The bedraggled museum guard is glimpsed through the miasma as a spectator, gaunt and haunted: art history as the true redeemer.

Where Did Our Lust Go?

Listening In: Olivier Conan, The Soul of Barbès

I’ve sometimes puzzled over what people mean when they say, “be fully present.” But my nights at Barbès often provided a natural version of that phrase. It was like a literal expression of that beautiful Rumi line, “I have fallen into the place where everything is music.”

Percy Bysshe Shelley’s poem “Ozymandias” memorably describes the eventual fate of all empires: “boundless and bare / The lone and level sands stretch far away.” And while it has been difficult to imagine alternatives to the current world order that arose after the collapse of the Berlin Wall three decades ago, cracks in the façade are multiplying. At Baseera Khan’s exhibition snake skin, a fourteen-foot-tall by six-foot-wide column constructed from pink foam insulation is horizontally sliced into seven similarly-sized pieces that are stacked, stood upright, and leaned across the gallery.