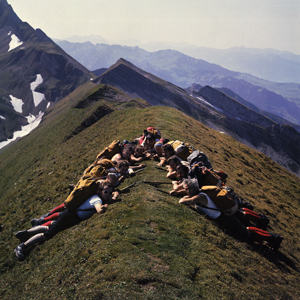 The late art career of Arnold Odermatt did not unfold until the early 1990s when the artist was already in his sixties. Though a long time coming, it led quickly from a few gallery exhibitions to an installation at the 49th Venice Biennale (2001) and even a solo show at the Art Institute of Chicago (2003).

Born in 1925 in the Swiss town of Oberdorf, Odermatt never studied art or photography. From 1948 until his retirement in 1990 he was a police officer in the small canton of Nidwalden. He was the first at his local station to capture its daily routines on film, including the investigation of wrecked cars in the aftermath of traffic accidents. The purpose of the latter images was simply documentary, and it is one of the clues to Odermatt’s creative process that there are two versions of most of his themes: one for the official police record and another that he shot based on his aesthetic tastes. Though taken between the 1940s and 1970s, with a few exceptions from the 1980s, most of the photos have been printed only in recent years.

Through Odermatt’s lens car crashes are not still lifes of tragedy but nostalgic and reflective impressions of human fragility. Odermatt’s photographs never include images of the injured, however; only the remains of automobiles hint at what had just happened. They remind us of the temporal nature of life, and yet there is something remote and estranged about them due to the fact that they are eternally bound to a specific time and location. We are looking at glimpses of the past in the concrete geographical context of rural Switzerland, a landscape that is picture-book gorgeous, tidy and, somewhat quaint. Life here holds the illusion of a fairy tale and while the car wrecks disturb the peace, they nevertheless seem minute within the larger picture. How can a smashed automobile, in comparison to the monumental Alps, be anything more than trivial? It is strange to state that while Odermatt’s work evokes a number of human emotions, sadness is not one of them.

This particular exhibition, entitled _At Work, _ focuses on Odermatt’s color photographs, which were done later in his career. Unlike the more dramatic black-and-white works that cannot help but allude to film noir (old cars, stark contrasts, dramatic angles), the color works document day-to-day activities of the local police. Though very different in mood, they are by no means less appealing, adding an unexpected humorous nuance to Odermatt’s world. There are the funny haircuts, from today’s perspective, the silly uniforms and pieces of furniture—all cloaked in the oak green and mustard brown hues of the sixties and seventies. Because these portraits are so clearly staged, with Odermatt’s colleagues shown using then-state-of-the-art equipment or engaging in target practice, they are as hilarious as they are surreal. This is not reality but rather theater, a play of a world familiar and yet removed.

Odermatt never attempted to exhibit his photographs. It was not until his son took an interest in them and published a book in 1993 that Odermatt caught the eye of the art world. Now in his eighties, he remains in Switzerland while his work has begun to travel abroad.