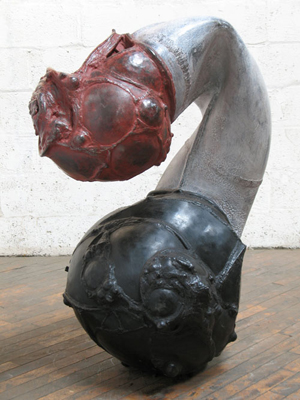 A painful ambivalence emerges from a viewing of Lee Tribe’s show Prayers, Angels and Spirits. Tribe uses constructed steel to make sculptures that have a feeling of totemic obsession and pre-industrial roughness, from tiny amulets formed of bolts and other metal scraps to a giant bent phallus with two heads. Tribe started out as a boilermaker but unlike Julian Schnabel, whose scabrous, dinner-plate encrusted surfaces are a kind of vengeful meditation on his days of waiting tables, his early experience seems to have instilled in him only the most ardent feelings for steel and its manipulation. He uses the medium easily, as if it were pliant and naturally sloppy. Brainpan-sized pieces have the choppy expressiveness of a ball of clay absentmindedly modeled by Rodin. Many of the works are colored in wax patinas of white, sienna and a beautiful gray-black, displaying the loving and tactile engagement with his craft that is Tribe’s strength.

Yet there is something anal, even stuffy about the works, like someone worrying the loose tooth of early twentieth-century Africanism. This quality, as well as the work’s aesthetic of agglomeration, emerges most forcefully in the charcoal drawings on display, all depicting balls squashed together and rendered with precise shading. A squat, featureless figure like a sullen snowman reflects the drawings in the tumorous growths appended to it, and although the finicky feeling is diminished through the process of affixing metal to metal, somehow it is still palpable. There is overall an affinity for rods and balls, which may be a celebration of the life principle but to this female viewer feels a bit tedious and insistent, like a guy on the subway rearranging his package.

Would it be fair to say that Picasso, in his use of African art, was able to tap into a force that is no longer available the contemporary artist? Is the problem simply an accumulation of self-consciousness around the idea of “getting to the core” in art? Or is it simply that Picasso was… Picasso? If I am not mistaken, Tribe is attempting to peel off Dadaism, conceptualism, postmodernism and a hundred years of history to arrive at some more essential reality, and I do not denigrate the attempt, nor Tribe’s sincerity, his eye, nor his ability to manipulate the materials. But the rawness of his work feels fully cooked.

Dorothea Rockburne was a mainstay of Postminialism, which was fine when people knew what Minimalism meant. The title of her new exhibition, of drawings, relief paintings and sculptures of the past two years, alludes partly to Giotto’s Arena Chapel frescoes, and partly to the knot as a modern thought motif; the latter interests her mathematically, and me art-theoretically.

In Hovnanian’s exhibition the definitions of medium and message, artist and spectator, addresser and addressee, sacred and secular, along with the aesthetic and the real, have been rendered interdependent.

Rockburne has created a chapel of her own in a townhouse on the Upper East Side of Manhattan that draws from her experience in Padua. To sit in her dark blue chamber and gaze upon the artist’s dramatically lit paper collages is to take part in a reenactment of a certain kind, a doubling of experience, where the audience has an opportunity to be in two places simultaneously.