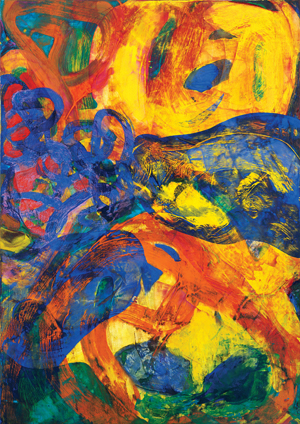 Looking at Bill Jensen’s paintings demands effort and openness. Their emotion runs the gamut of experience with touching vulnerability and imposing force. Though they sometimes suggest landscapes or human forms, their imagery remains doggedly elusive. Their allure is like that of religion to the believer, holding open a path to discovery without providing fixed points of reference beyond the depth of the believer’s faith.

In Cheim and Read’s large front gallery, I was immediately drawn close to the satiny surfaces of paintings like “The Five, The Seven (The Scream),” then compelled by the force of the color to retreat and take in the work as a whole. Following the sinewy movement of Jensen’s brush, I enter the next room, where primary and secondary colors give way to umbers and violets. In the small gallery just off the reception desk, the paintings’ darkness is nearly impenetrable.

Though much of his painting’s appeal lies in its psychic intensity, Jensen’s sense of history, which is markedly American, is also a major factor. Albert Pinkham Ryder and Marsden Hartley, himself a disciple of Ryder, are apparent influences. Ryder dwelt in penumbrae—the light in his paintings is always peripheral. Hartley revealed his own attraction to shadows in paintings like “Deserted Farm” (1909) and “Storm Down Pine Point Way, Old Orchard, Maine” (1941-43). While The New York School might seem a likely precedent for Jensen’s higher keyed works, his painting, like that of Ryder and Hartley is more homespun, less self-consciously grandiose (yet no less grand). It is very rare for contemporary painting to bring the past to life as vitally as Jensen’s does. This is a particularly welcome in light of the current rejuvenation of painting, the success of which will depend on its ability to reconnect with its now-too-distant past. When a painter the caliber of Jensen refers to certain artists and certain periods, we should pay attention.

Mostly though, Jensen’s exhibition is about paint and everything it can do. I came away shocked by its sense of possibility. It seems as if every imaginable twist of paint is in this exhibition and every kind of color. This can’t actually be the case, of course, which leads to the realization of just how much is yet to be done with painting, not to mention life itself. By contributing so thoroughly to an art form without diminishing a sense of things to come, Jensen offers hope—the finest gift any artist can bestow.

Philipsz uses sound to physically engage with space, somehow like an audio sculptor; it’s a sensitivity that enables her to explore emotion, history, and myth, embodying through sound and place those themes in such a way as to make them accessible and intimate to experience in the here and now…