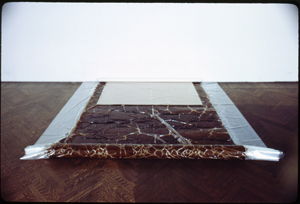 This show frames the terms of a debate about painting carried out 30 years ago in Soho’s, galleries, studios and bars. Its omission from the history books, argues the show’s artist-advisor, David Reed, is a reason for the general lack of dialogue and sense of history among young painters today. He’s right. Each of the five rooms in High Times, Hard Times is an argument with the preceding room and you’re forced to decide where you stand. You’re also led to some pretty unorthodox conclusions, like believing that conceptual art, with all its anti-painting rhetoric, draws its strength from painting itself. Or that gestural 80’s figurative work came from one side of 70’s abstraction while our contemporary slick-surface figuration comes from the other.

The artists in High Times Hard Times use their work, in part, to set forth a point of view. There are two main camps, those who believe a painting can be made with a prescribed set of conditions and those for whom painting is the result of a series of emotional responses that evolve over the course of its creation. The former favor adherence to a more rigorous process and the latter tend toward more liberal, expressive use of material.

Not all the work in the show is particularly good. These are 30-year-old paintings. Some haven’t aged well and some just weren’t painted well. Room one, as a whole, is pretty doctrinaire. It contains work by Jo Baer, Kenneth Showell, Cesar Paternosto, Jane Kaufman, Ralph Humphrey and Dan Christensen. In the 60’s, painters were said to have carried a copy of Greenberg’s Art and Culture in their back pockets. This bunch seems to have studied it too closely. There’s a lot of colorful spray paint and only sparing use of the brush. Surfaces are absolutely flat. They bought the jargon—hook, line and sinker. Baer’s the exception. The self-reflexive goal pursued by these artists is tempered in her work with intelligent design and deliberate yet delicate brushwork. There’s a reason her reputation has remained so strong.

Room two is anything but prescribed. It’s also anything but painting. The closest things to it are Lee Lazano’s work, which has holes punched in it, and Peter Young’s, which is hung so high you can’t examine it. Lynda Benglis is a prominent member of this bunch and one of her “pours” covers a swath of floor. Yayoi Kusama is another. These artists are obviously sick of Greenbergian formalism and want to find another way of working. The structure their work lacks reappears in room three, where Dorothea Rockburne, Blinky Palermo and Richard Tuttle provide it. It’s a new structure, not Greenberg’s anymore. They make incisive choices of material, avoiding canvas and confounding expectations. In “Intersection,” for example, Rockburne floats a slab of quarter-inch chipboard on a rectangular bed of thick, black motor oil. The oil’s odor fills the room, deepening the tension in the piece between sensuousness and structure. It’s a high-water mark for painting through which one can sense a path opening to conceptualism.

The final two rooms contain a two-pronged argument against taking that path. Room four contains two videos that I loved—old, grimy black-and-white footage shot by painters—and seven paintings which left me cold. Maybe it was a concession to minimal sculpture or, as the wall plaque suggests, an adoption of techniques gleaned from videos. Whatever the impetus, these paintings, made through mechanical repetition of particular gestures, leave out much of what makes painting interesting. It’s hard to eliminate the hand and expect a painting to vivify its environment. Touch is the first way we experience the world. Taking that out is a mistake.

Room five puts it back in and that’s where I linger. Early paintings by Mary Heilmann, Elizabeth Murray, Ron Gorchov and Pat Steir are at the fore in a large work entitled “The Storm” by Joan Snyder on its own in an antechamber. These paintings are sensual, warm and daring. They don’t go for grandiose statements (“Ties In My Closet” and “Flamingo” are two of their titles); instead they feel personal. If each of the rooms in this show is an argument for an idea about painting, hanging these paintings at the end is an argument for where painting is going and why. It’s no coincidence that, compared with the painters in room four, the artists in room five all went on to more substantial careers. It’s also no coincidence that, with the exception of Gorchov, they’re all women. Unlike so many exhibitions about painting, High Times, Hard Times is trying to tell us something urgently important about its subject. It shows why some artists last and others don’t and it underscores the strengths of the medium—its inherent ambiguity, sensuousness and malleability—as the engines that propel it forward.

The Life and Times of Alvin Baltrop

He presents an experience that, in the language of the time, would have been called deviant as something that simply exists in the world on its own terms, and demands that the viewer actively reckon with their response to it.