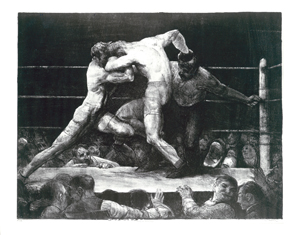 In July, 1907, Ed Keefe brought his roommate George Bellows (b. 1882, Columbus, Ohio) into Tom Sharkey’s notorious fight club, across the street from the apartment they shared at the intersection of Columbus Ave and Broadway. Bellows was 25, and the series of drawings he made at Sharkey’s would become the subject matter of paintings, lithographs and illustrations that would make his reputation as an artist. Nine of the great boxing lithographs, dating from 1916 to 1924, were on view at Craig F. Starr Associates from January 12 to February 10, 2007.

Bellows was not the first artist to portray a boxing match. Thomas Eakins had painted boxers and wrestlers a decade earlier, and Gericault had made a lithograph of a pair of fighters as early as 1818. What established Bellows’ reputation as an American “Art Rebel” was that he put his acquaintance not only with fight saloons, but also street life, the tenements and the waterfront on canvas. At the New York School of Art, Robert Henri had urged his students to get out of the studio and paint “real.” Sharkey’s club gave Bellows the opportunity to study nearly naked figures in raw, bloody struggle, surrounded by the mounting chaos of the crowd around the ring. By late 1907, in large part because of his painting “Club Night,” Bellows’ work was touted as “the extreme of realism.”

In 1916, perhaps moved by the death of Eakins whose work he admired, Bellows returned to some of his fight drawings (before his marriage in 1910 ended his visits to Sharkey’s) with the idea of making prints. From the first he decided to work with the best lithographers in the city: George C. Miller and Bolton Brown. Both printers understood the great potential of lithography, which, like silkscreen, had only commercial applications in the U.S. at the time. The printers combined both techniques, so that the images they made for Bellows evoke not only the painterliness of the artists he admired (Hals, Velazquez, and Rembrandt) but also the immediacy and flatness that we now recognize as trademarks of Pop. The prints made over this nine-year period transformed the medium in America.

“A Stag at Sharkey’s” (1917), derived from his painting of 1909, shows some important departures that Bellows made to adapt his painted images to the monochrome print. He first eliminates the spectator-side ropes (although traces of the lower one are still visible). The horizontal lines, which in the painting serve to establish depth and anchor the composition, would, in the print version, have fractured the carefully massed group of two boxers and a referee (who has taken on a greater compositional importance than he holds in the painting). Bellows reduces the mat to a thin strip, barely accommodating the fighters, thus pulling the viewer into the action. (The effect is reversed in “Dempsey Through the Ropes” (1923-24), where the upper horizontal establishes a coherent point-of-view).

Bellows’ work fared poorly at the 1913 Armory show (Bolton Brown’s did even worse, deserving, in the words of American Art News reviewer James B. Townsend, “no place in this gallery”). Moreover, critics of the day, as well as more recent writers, have thought the 1913 Armory Exhibition had a “disastrous effect” (Fairfield Porter) on Bellows’ style, and that his subsequent experiments with compositional systems was an attempt to come to terms with European Post-Impressionism. Bellows’ work does have the unsettling effect of suddenly organizing itself into self-referential proportional divisions and geometries based in root-rectangles and Golden Sections, more so than other painters of his day.

It should be remembered that Bellows was a serious anarchist, as was Henri, John Sloan, Randall Davey and Jay Hambidge. While many aspects of European “pure” abstraction engaged metaphysics and philosophy, the anarchists preferred to think in terms of physics and natural science. In 1913, Peter Kropotkin published Modern Science and Anarchism, which called for “a mechanical explanation of all phenomena, embracing the whole of nature…”

For Bellows, mathematical investigations such as those of Samuel Coleman (Nature’s Harmonic Unity,” (1912)), D’Arcy Thompson (“On Growth and Form”) the triangular, hexagonal, and rectangular “webs” of H.G. Maratta (1915), and, after 1918, Jay Hambidge (“Principles of Dynamic Symmetry”) would have suggested geometries applicable to both the natural sciences and the arts. Although it was clear he grasped the essential non-objective aspects of Western painting, Bellows might have been temperamentally unwilling to reduce his world to one of avant-garde abstraction. These same geometries would be studied in the 1940s by Tony Smith, Jackson Pollock and Barnett Newman as avenues out of Cubism, with widely different consequences for painting and sculpture. Bellows died in 1925, age 42, of appendicitis.

59. (Coney Island, 42nd Street, the Meatpacking District, among other locations)

Deserted by his parents at a young age, subjected to abuse by his supposed caregivers, a New Jersey teenager finally has no option but to drop out of school and run away to New York City where he survives, barely and dangerously, as a street hustler. Now in his mid-20s and trying to make his way as an artist he embarks on a project that takes him back to many of the locations where he used to sell his body for sex: “the places I had hung out in as a kid,” he later explains, “the places I starved in or haunted.”

On a Saturday afternoon four weeks before her solo exhibition is scheduled to open at one of the most prestigious galleries in New York—it will be her first show with this gallery—an artist decides she would like to start some morning glory flowers in the window boxes outside her third-floor apartment. As she steps onto one of the window boxes it gives way and she falls three stories to a parking lot below. Immobile but still conscious, she wonders whether, as a tough New Yorker, her predicament justifies screaming for help. She decides it does, and calls out. “We’ve already called an ambulance,” someone tells her.

Standing on the sidewalk, peering into this Chinatown storefront around the corner from the Lam’s apartment, the exhibition invites the viewer to imagine that other families much like this one exist in similar apartments all around, if one could only see through the walls.