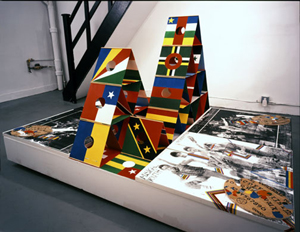 A few weeks ago Ken Johnson wrote something in The Boston Globe about a show called Big Bang! Abstract Art for the 21st Century that stuck with me. According to the ex-New York Times critic, “Making art appear more meaningful and relevant by relating it to some other field of study is a strategy that’s become all too common among artists and curators of the postmodern era.” Although he was referring to a certain brand of slick and conventional pattern painting, the general idea can be applied to much contemporary art. The question, as I see it, is whether this interdisciplinary practice, which at bottom seeks legitimacy outside the realm of the visual, leads to a contamination of art. And, if so, to what degree? The answer, of course, comes down to a personal, philosophical choice about the meaning of art—one person’s visual pollution will be another’s enrichment.

Landing inadvertently in the center of this discussion is part-time DJ, Gang Gang Dance keyboardist, and prolific visual artist, Brian DeGraw, whose current exhibition inaugurates James Fuentes LLC, a new space on St. James Place on the edge of Chinatown. DeGraw’s show, entitled “Behead the Genre” casually disregards the question of disciplinary purity—his music cross-pollinates with his art, his art with his music; his life and his art coexisting in a symbiotic, even unitary entity.

DeGraw has created a colorful, platformed shrine celebrating youth, world music, and the breaking of conventional artistic barriers. “The Youth of Today”(2006), features two 36-inch-square screen prints of enlarged album covers, one from the pop-reggae group Musical Youth, the other of a band called The Youth of Today. Both albums bear the title, “The Youth of Today,” but the two groups couldn’t be more different: the former an English quintet with a hit single, “Pass the Dutchie,” about sharing a joint; the latter, a Straight-Edge hard core punk band from Connecticut. The piece suggests that beneath heterogeneous surfaces and commercial artifices there is a universality of artistic ambition transcending class, borders, genres, and disciplines. Behind the two screen prints rises a pyramid of album jacket covers painted over to resemble flags from around the world. Although the structure anchors the piece visually, it amounts conceptually to a more overt rehashing of the same basic idea.

A framed collection of paper scraps hangs on a nearby wall, comprised entirely of scrawled, late-night song requests made to DeGraw, the DJ, and later compiled by DeGraw, the artist. One, pasted dead center, is nothing but an incoherent rant; one begs for “more hip hop;” another simply reads “Justin Timberlake.” The collage is interesting if somewhat visually uncooked. The point, though, isn’t for viewers to marvel over individual pieces as much as to take in the totality of DeGraw’s general perspective. His work functions most successfully as material traces of a life lived through music and art. It would have made just as much sense for DeGraw to set up a DJ booth in the gallery or to project one of his videos while playing the keyboard on stage for Gang Gang Dance. In fact, he has recently put together a highly stylized video documentary of the band that further blurs aesthetic boundaries.

As has happened with other cross-disciplinary artists such as Christian Marclay and Thurston Moore, there will always be those who say that one activity dilutes or distracts from the other. And some art purists’ hackles will always flare when an artist from another field encroaches too close to their territory. In the case of Brian DeGraw—as well as Marclay and Moore—the work in question exists across interests, not inside of any one of them. The flood of ideas from one experience floats the success of another—a rising tide that raises all of DeGraw’s ships.