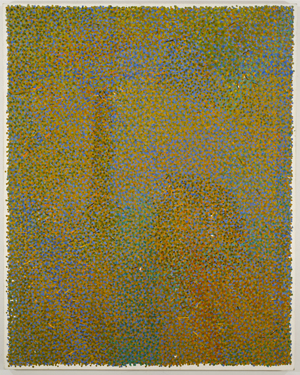 It’s evidence of some unwritten rule governing the division of artistic labor that Andrew Forge’s work as a teacher and critic would color our understanding of his paintings, and not the other way around. While Forge the painter lent sensitivity and acumen to Forge the teacher and Forge the critic, his own work runs the risk of being obscured by the success of his two parallel careers. A student of Victor Pasmore and William Coldstream, Forge emigrated from England to the United States and carried an energetic lineage of teaching with him to a number of august art institutions. His writing on artists from Monet to Rauschenberg are lucid critical studies enlivened by his perspective as a fellow practitioner. These biographical facts can imbue his paintings with an unwanted air of didacticism and traditionalism; it’s difficult not to see them as examples of the values he espoused as a teacher and the qualities he analyzed in other artists. Five years after his death, the survey of his work at the Betty Cuningham Gallery presented a perfect opportunity to see Forge’s paintings on their own, and his renowned sensibility put into practice.

The work is, not surprisingly, eminently sensible. Forge’s mature paintings adhere to a strictly controlled format: nickel-sized patches of opaque oil paint, in no more than a handful of different hues, arranged into a dense field across a canvas. Small matchstick-sized lines interrupt the weave of dots, suggesting but not articulating a hidden composition. Variations in the density and order of the colors create minute changes across the canvas, and break its visual field into shifting planes and indeterminate objects. Abstract pointillism would be an obvious but limiting designation for this type of work, which comes across at first like an attempt by Seurat to paint with his eyes closed.

The organic palettes and spectral shapes of Forge’s compositions, as well as the pastoral iconography of their titles—“Large Meadow” (1997), “Heavy Hemlocks I” (1999), “Willow” (1999)—imply a fairly obvious landscape analog for the paintings. But Forge’s considered choices seem tailored to thwart all unequivocal interpretations. A minor but telling detail of Forge’s paintings is the way in which the network of dots and lines thins out as it approaches the edges of the canvas, showing the methodical construction of his nuanced color effects. The works are as much about conjuring as they are about revealing the trick. Forge’s work requires the viewer to recalibrate the act of seeing with successive alternations. As soon as we begin to organize the elements of Forge’s paintings into an illusionistic whole we are reminded of the perceptual effort we’re exerting to make an array of colored dots on a flat surface into a picture. And once we’ve broken that spell, we arrive at the painting’s deliberate and self-contained construction: we’re conscious that ours aren’t the first set of eyes to make this mental journey.

In the catalogue essay, reprinted from a magazine interview with the artist in 1985, Forge describes his conversion from the dogged observational approach of his former School of London contemporaries to the discreet abstraction he practiced in his maturity. It was the emigration to America and Forge’s introduction to one of its quintessential artistic products, Robert Rauschenberg, which served as the catalyst:

[Rauschenberg’ work] seemed to have a very vivid correspondence with my sense of the word [realistic,] with my sense of reality; that it incorporated a great deal of material that was _actual, _ and yet at the same time it caused one to reflect upon how one perceived and how one understood the world…

Forge’s interpretation of Rauschenberg led him to very different conclusions from that of other, more experimentally-minded disciples of the artist. Forge saw in Rauschenberg an attitude towards time and the world that could be explored using even the most traditional artistic means of paint, brush, and canvas. The aspect of Rauschenberg’s work that chafed against the confined terrain of modernism was anathema to Forge, who was and would always remain a celebrant of the grand tradition of painting. Rather than a weight to be shrugged off, Forge saw the history of painting as a repository of templates for his own work. Further, he seemed to understand the practice of painting as operating in two seemingly incompatible ways: as an investigation of the artist’s direct perceptions of the world as well as a record of his dialogue with models from the past.

All of this can make the work seem fairly donnish, and, compared to some of the more violent dramas of negation and self-invention played out by artists of his generation, it is. But balanced against the staid respectability of Forge’s work are the unexpected rewards of its austerity. Walking into the gallery I was struck by the decorative richness of some of Forge’s canvases, which contain passages of gold as opulent as any Klimt. That on closer inspection the gold was made of acid yellows, dull oranges and chalky blues is as convincing a proof of painterly alchemy as I’ve ever seen.

Andrew Cranston: Waiting for the Bell

Waiting for the Bell, Andrew Cranston’s first solo show in New York at Karma, presents a new direction in scale for his dreamlike and beautiful paintings. The show is split in two distinct sections: one contains many of Cranston’s small paintings on book covers, which he is known for; the other includes eight large-scale paintings on canvas. These are the standout works in the show. Each has a restrictive color palette and depicts simple, oddly familiar and sparsely populated landscapes. A sense of stillness prevails over everything.

In early May, Spencer Sweeney’s exhibition Perfect opened at the Brant Foundation. The drawings and paintings that spanned across the two floors of the foundation represented fifteen years of work and achieved the depth and dimension of both a retrospective and a concert . When the energy finally settled from the opening, we talked in his studio, where I found myself surrounded by the same palpable excitement and energy captured at the Brant. Next to his drums and guitars, and flanked by a ring of booming paintings still in progress, we discussed the shared spaces of music and painting, how painting can be used to anticipate and store the energy of an announcement, and how self-portraits can hold the tension of contradictions to emanate and reflect the soul.