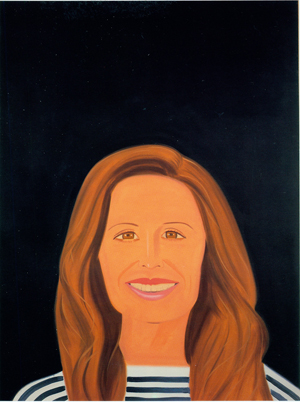 In 1966, when Brian Wilson titled his album SMiLE, he probably wasn’t attempting to give directions to his listeners, but rather to himself—a soothing whisper in his own head, reminding him to lighten up, cheer up, get it together. But for a guy who then spent five years morbidly depressed, more or less in bed, a quick, cheerful mood adjustment may have been an impossibly tall order. Anyone who has listened to Wilson’s tortured masterpiece knows immediately that behind this beachy, boyish auteur has always lurked the soul of a haunted artist—very bad vibrations, essentially.

This Smile came to mind as I entered Alex Katz’s exhibition, Smile, at Peter Blum’s Chelsea gallery, a suite of large, closely hung paintings all depicting frontal head-shots of various (in some cases recognizably famous) female models, all on slate-black fields that float upward in austere vertical uniformity. The paintings, each at once dark and light, all have the same buzz as if they’ve been wired to one circuit. I was not surprised to hear that Katz had bought some of these paintings back from collectors in order for them to be exhibited together in Blum’s exquisitely proportioned new Chelsea gallery, and thereafter permanently kept together as a series. Here, integrated, they envelope the viewer with the distillation of one clear theme, like an Alex Katz take on the Rothko Chapel.

But after this show’s astonishing first impression, the series begins to break down, each painting revealing its own awkward, banal, if not slightly hallucinatory truth. In one portrait after another, the artist seems to fixate on a frighteningly angular hair cut; a noticeable gap tooth; two hay-like, symmetrical hair braids; a tanning booth complexion gone wrong; an odd, if not itchy, tilt of the head. Once each painting’s idiosyncratic subject is indexed in Katz’s vocabulary—his economy of fluid gestures—out come the queasy “bad vibrations” of his quirky, unconventional artistry.

Standing at eye level, each Katz smile is revealed to be a fusion of surprise shapes and colors, articulated with the artist’s trademark slap-dash precision, a style that has remained captivating since the late 50s when he first burst onto the Cedar Bar scene. Up close, inside one of the model’s mouths, I’m drawn to an unexpectedly geometric articulation of the border between top lip and gum that feels less like an invitation to a kiss than a condition in need of an orthodontist’s care. (This reminds me of a particularly cruel scene in John Cassavetes’s 1970 film, Husbands, in which the director, having cast himself in the role of a dentist, attempts, absurdly, to calm an hysterically nervous female patient down while brandishing a sharp, shiny instrument. Undoubtedly more bad vibrations here.)

Knowing Katz’s process, however, may offer a clue to what I suspect is an impulse far different from Cassavetes’s aggressive dentistry. Katz paints sweet, intimate little studies before endeavoring to execute these larger and more highly choreographed blow-ups. So it’s possible to imagine that sometime earlier in the process, each one of these models did actually crack a sincere and genuine smile.

Thus one might imagine that behind these somewhat calculated large canvases lies not only Katz’s finesse as a painter on a technical level, but also his seductive charm, jazzy patter and indeed his own smile—or at least the momentary banishment of the scowl he’s been wearing in public since the 50s. In fact, it’s downright fun to imagine being one of Katz’s female muses, up in his sun-drenched Soho studio, slightly high on turpentine fumes, watching him zealously cut into his paints with his palette knife, as enamored with the process as ever.

But is it possible that the easy smile on both the models’ faces and, hypothetically, on the artist’s, gets lost in translation once the painting is re-enacted on such a large scale? Why do they suddenly attain the disturbing, distorted, obnoxious irony of a Newport ad? Vibrations: Weird.

Regardless, the project has a way of suggesting that “the painter,” in his wondrous bohemian life, is free to be something of a seducer, a man with many muses. Perhaps this is the reason why the gallery’s front room is dominated by a single painting that has been separated from the group. This portrait is of Ada, the artist’s wife, the muse of all muses. To get to the chapel’s inner sanctum, one must first get past her—smiling, yes, but also monitoring the situation. In Ada’s smile, no matter how out of proportion, we can still recognize her genuine place in the artist’s life. In this painting, it is possible to sense the romance of a love affair stretching out over time, the devotion, the give and take, of husband and wife.

But with this love—or law—presiding over the other paintings, it is hard not to wonder what kind of restraint is also being exercised? Perhaps this is why the odd details I spoke of earlier seem to spring from the paintings with unexpected adolescent goofiness. Perhaps Katz the painter is more tortured than we think?

But Katz has always, for better or for worse, chosen to remain cloaked in his metaphysical garments, quite like Warhol, who so famously opted to keep things on the surface. In a recent interview with Bruce Hainley for Parkett, speaking on the topic of men’s couture, Katz remarked revealingly on his favorite suit: “the smoothest off-the-rack suit Cerruti, I can, like, pour into it.” The suit, here could almost double for the skin of paint tailored by the artist to fit his canvas, its fine stitching luxuriously form-fitting the face of each one of his models.

This brings us back to the show’s deliberately seductive title. We’ve all been taught, through Hollywood and other pop culture images, that it’s un-cool to smile too big for the camera. Our heroes are supposed to have attitude, to refuse to reveal themselves, to remain enigmatic. Think of Marlon Brando or James Dean or Jackson Pollock with their pouty expressions and their angst-ridden psyches. But Katz’s fastidiously painted muses aren’t afraid to be open. Nor is the painter afraid to be uncool. This is why generation after generation rediscovers him as a cult figure—a painter always at the top of his game and always open to interpretation. In this way—whether smiling or frowning, goofy or cool, tailored or tortured, man or boy, happy or sad, good vibrations or bad—the paintings always wink and do what Katz intends for them: they come alive.

For the best part of the last decade, Hong Kong has been a major focus for the international news media because of continuing public protests there against the authority of Hong Kong’s Beijing-backed legislature and, more recently, the imposition by China’s central government of the so-called National Security Law (NSL) aimed at suppressing political dissent in the region.