Michael Gira sat across the table at a quiet Brooklyn bar on a rainy Wednesday night. The conversation had settled on a mutual hero, Werner Herzog. 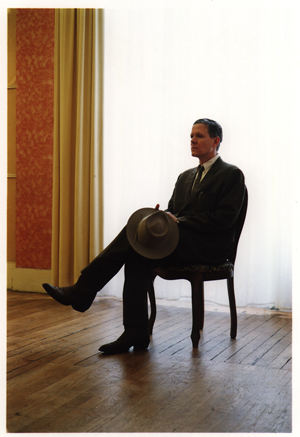 “There’s such a theme in his films of the quixotic character going out against nature,” Gira said. “And that’s how he does it personally, too. He’s the last of the great hero artists, like Joseph Beuys, or John Huston.”

In many ways, Gira is himself a kind of quixotic figure, though in his case nature has been replaced by the music industry.

After moving to NYC in the late seventies, he quickly gained notoriety as the founder of SWANS—the most brutal of New York’s no wave bands. Their music was a cement fist to the back of the skull, the noise overwhelming as Gira intoned songs about despair, disgust, pain, psychosexual violence, physical decay, and a particularly frightening kind of love.

A quarter-century later, with Gira now in his early fifties, his artistic output has changed considerably. “If it didn’t,” he says, “I’d be pretty stupid.” Then he added, “Maybe I’m fortunate in that I don’t have a financial incentive to stay the same.”

Since SWANS ended in 1997, he’s released albums as the Body Lovers, the Body Haters and Angels of Light, together with several solo recordings. More than just the names, however, the music itself has changed, and dramatically. With Angels of Light, you can hear everything from sweet, ukulele-based love songs, to pounding whoop-’em-ups, to indefinable experimental numbers. From walls of noise to sparse, poignant solo guitar. 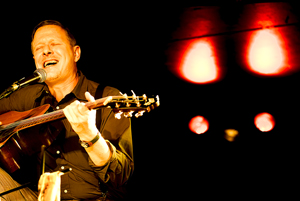 The one constant has been Gira’s uncanny, unmistakable songwriting—but even that’s matured. While the darkness is still palpable, he’s balanced it with glimmers of light and humor. It’s developed into a very rich, complex, human music that stands alone, beyond category. It’s simply and purely Gira.

He says it’s been an exercise in organic evolution.

“That whole process started way back in SWANS. Back in the mid-’80s, I started introducing other sounds, and Jarboe’s vocals, and songs on piano, and gradually I started doing songs written on acoustic guitar, which was sort of anathema to anyone who was following SWANS in the early days. I don’t think I was very successful at that for a very long time—but I’m better at it now. I’m still not a skilled musician by any means. Intentionally so, I guess. Much to the consternation of the very skilled musicians I work with, I still talk in colors, or pictures, or gestures. It’s mainly by choosing people to work with, having them contribute to a song and then gleaning something from what they did, getting them to push that and then taking that element and getting someone else to respond to it. The orchestration sort of grows that way.”

Gira is currently working on a new album (possibly his last as Angels of Light), part of which he recorded with Akron/Family, an experimental jazz/folk quartet Gira discovered a few years ago.

“I did an album (Angels of Light Sing Other People), with the Akron/Family as almost the sole musicians,” he explained. “That was an exuberant experience, working with such young, enthusiastic musicians. They’re so creative—they come up with really great ideas. I just recorded the basic tracks for this new album with them, and now I’m bringing in a lot of friends to build it up from there.”

It’s the way he’s traditionally worked, with a fluid and varied group of musicians in order to achieve whatever sound he’s after.

“Angels of Light is not really a band, anyway…I don’t want to be in a band. I just want to write my songs and start imagining how I think they should be realized. Once you have a steady band, things are going to sound pretty similar all the time.”

One thing that allows him to work that way is the fact that he runs his own label, Young God Records. In 1990, after a miserable experience at MCA with The Burning World, he’d had enough, and founded YGR. These days, it’s pretty much a one-man show. Along with creating his own music, he signs other acts, handles A&R, writes press releases, arranges the artwork, and produces most of the albums himself. It’s a very personal operation. Even his press releases are personal—almost chatty.

“They’re meant to be very anti–music business,” he explains. “‘I guess I fling a lot of hyperbole, which is pretty much standard, but it’s coming from me directly—it’s not the vague, omniscient voice you see in most press releases. The whole business model for the label is that way—it’s just a fifty-fifty split, and everything’s open.”

In a way, Young God is reminiscent of the punk labels of yore—like SST or Alternative Tentacles—but without the thievery.

“That was always a farce to me—no label I was on ever paid me,” he says. “I just try to look at it as a simple agreement. It’s just based on trust, and it seems to be working out pretty well.”

Although Gira originally founded YGR as a means to release SWANS albums, by the late ’90s he was bringing in other acts, beginning with Windsor for the Derby.

“They played with us on a tour, and I liked them a lot. I was just learning—I could’ve done a much better job with them. Gradually I got better at it. We had quite a bit of success with Devendra Banhart, so that helped a lot.”

Unlike most indie labels, though, none of the acts he’s signed—from Devendra to David Coulter to Mi and L’au to Lisa Germano—sound anything alike. Coulter crafted cinematic soundscapes, Germano is a heartwrenching singer/songwriter, and Mi and L’au create delicate, odd little songs in a cabin in the Finnish woods.

“I just look for what I can tell is a very intense, unique commitment to the music,” Gira says. “It’s something that’s really necessary for the artist to do, irrespective of whether they make it in the music business. Something that has a really unique, personal quality to it. I don’t want to launch trends or compete at CMJ—I don’t want anything to do with that shit. I just want something that people might want to listen to now, and later, too…I’d like it to be successful and sell, but on its own terms. Sort of like the way I look at Brian Eno’s solo records. They’re outside the regular world of what was going on.” Then he added, “I get sent a lot of demos, unfortunately. You can just hear the influences, and how they’re trying to make it in the music business.”

The only band, in fact, he’s ever signed as the result of a demo was Akron/Family, whom Gira nurtured for about a year before signing. They kept sending demos, and he kept offering suggestions. They’ve since released three albums.

“Their new thing (Meek Warrior)—it’s amazing…I don’t know how to describe it. They leap off into these weird improvisational jags, noise segments, then suddenly there’s this bucolic, beautiful, Beatles-like folk song in the midst of it. They’re kind of an all-consuming experience live. They play for two-hours-plus, usually. People just go nuts. They’re one of the best bands I’ve ever seen—they just draw the audience in.”

Unfortunately, running his own label also means having to face the same cultural and technological issues facing the rest of the music industry. He’s no fan of illegal downloads.

“At first I was pretty sanguine about that, because I figured it would just destroy major labels, but now it’s starting to cut into independents too,” he says. “Everybody’s seen a big drop in sales. It doesn’t make any sense to me—I guess this generation of kids just doesn’t understand that people should be paid for their labor. I don’t know how a band is gonna exist, how a label is gonna exist.”

One night after an Akron/Family show, he says, the band was signing CDs for fans. A kid asked about a particular disc, and a member of the band explained it was a homemade CD they only sold at the shows.

“Oh yeah,” the kid replied, “I already downloaded that.”

“What is the thinking?” Gira asks. “On a much bigger scale with me, that’s what’s happening. It’s strange because the label’s really starting to get a reputation, and it’s doing really well—but as that’s happening, I can see the effects directly…It’s really interesting sociologically, what it’s gonna mean for music.”

After wrapping up the new album, Gira will be packing up and leaving New York. It’s time for another change, both musically and environmentally.

“I think I’m finally gonna get it together to get a little home studio. And I’m hoping, if I can contain myself, to just start doing very, very simple records. But I always get this bug and I start orchestrating. I’m sort of addicted to sound.”

Reflections on Reggie Wilson’s Danspace Platform: in Conversation with Drawings
and Text

By Gyun Hur and Helly Minarti

As a continuation of a drawing and text series produced during Gyun Hur’s time as writer-in-residence at Danspace Project Platform 2018, Gyun invited Helly Minarti, a visiting dance curator/scholar from Jakarta, to join her in performative writing on a Google doc as a response to a lively conversation she had with Helly at a café this month.

Sound Explorers: Sound House and This is the Color Described by the Time

This month, two new exciting productions, Sound House by Stephanie Fleischmann and This is the Color Described by the Time, conceived and directed by Lily Whitsitt, radically reimagine theater making, with symphonic results.

Waves of light, sound, and electric current flow throughout Transformer: Native Art in Light and Sound to demonstrate the vitality of Indigenous contemporary art in the digital age.