Commissioned to create a piece for France Culture’s Atelier de la Création Radiophonique, and basically given free reign to do whatever she wanted, Colleen (aka French electronic musician Cécile Schott) conceived an exercise in restriction: She would limit her instrumental palette to music boxes. Pleased with the outcome, she decided to release her experiments with the devices as a collection; the result is Colleen et les Boîtes à Musique (Leaf Records), a shortish excursion (at just over thirty-eight minutes) through the pleasures to be had from plucked combs and clockwork bells. 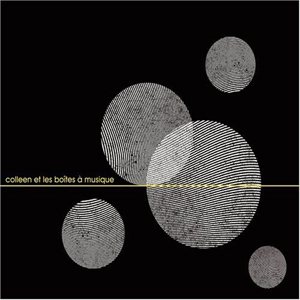 The music box: To open one is to discharge (along with a loping, tuneless rendition of “Edelweiss” or “Over the Rainbow”) a volley of kitsch images and associations: murky Victorian parlors, childhood birthday parties, twirling ballerinas, Swiss mountain scenes, glittering snowflakes, porcelain bluebirds, chugging carousel horses; a lace-doily, canopy-bed, pink-chenille world inhabited exclusively by dusty, doting grandmas and eight-year-old girls. Alternatively, one pictures a shadowy Gepetto-like figure hunkered down over a workshop bench littered with impossibly tiny gears and cogs and gleaming surgical instruments.

Armed with an array of these endearing contraptions in all sizes and shapes, from table-sized nineteenth-century oddities to the bare-bones mechanisms of modern musical birthday cards, Schott (whose two previous releases eschewed cold ambient gimmickry in favor of warm, introspective soundscapes) sets out to deconstruct and pry open this coy and precious world-in-miniature, employing her considerable technological savvy to bend, shift, stretch, and loop its plinks and tinny echoes into strange and mesmerizing shapes. The result is far less twee than one might suppose, conjuring a haunted-toyshop orchestra suspended in a dusky space between whimsy and melancholy.

Music this high-concept calls for a light, playful touch, which Schott certainly possesses. In less deft hands the whole thing could have devolved into mere ironic diversion—a smirking appreciation for the amusing bric-a-brac of a clunky, mechanical past—or breathy, saccharine self-indulgence. Instead it frequently imparts a real sense of wonder and mystery, and there are enough moments of quiet elusive beauty to soothe the breast of the most curmudgeonly listener. At times the music struck me as the aural distillation of an Andersen fairy tale: the Steadfast Tin Soldier being swept along a rain gutter towards the open sea.

The release is not without its flaws, however. While Colleen’s strict adherence to her initial conceit does allow for richer textures and more subtle nuances than might otherwise have been achieved, it can sometimes become almost too subtle, bordering on the monotonous, and—a constant danger with music this quiet and spacious—hovering on the threshold of sonic-wallpaper irrelevance.

After a fitting introduction in which we are treated to the sounds of gears and springs being cranked into place (“John Levers the Ratchet”), Colleen plunges us headfirst into a cascade of echoey chimes recalling a prepared-piano piece (“What Is a Componium”). “Charles’ Birthday Card” is one of two pieces that reveal a recognizable melodic line—in this case, a broken-down “Rock-a-Bye Baby”; the other, “A Bear Is Trapped,” locates the well of loneliness at the heart of “Pop Goes the Weasel.” “Calypso in a Box” is a brief, snappy ditty that sounds like a video-game tune composed by Jean-Jacques Perrey (hear it click, cluck, and swirl). “Bicycle Bells” is as twinkling and moonlit as a summer night.

The two standout numbers on the disc are “Your Heart Is So Loud,” which takes a darker, more hypnotic turn, ambling and bobbing along downstream, with notes appearing on the surface before being once again submerged; and “What is a Componium Part Two,” a serenade of sparkling, glassy notes underpinned by a series of harplike glissandos.

Too often, ambient and electronic music is stripped of anything like a human touch, becoming, at its worst, all surface—hyper-slick and humorless. Putting the music box through the technological wringer while maintaining a kind of reverence for its loopy, lopsided personality, Colleen manipulates it into something that sounds organic and alive. Colleen’s music boxes may be mechanical, but they are anything but artificial.

A palpable feeling of suspense suffuses the space of Kate Millett’s Terminal Piece (1972). 46 wooden chairs are installed in two long rows behind a parallel series of vertical wooden bars that span the length of the gallery. The lighting is dramatic, with seven light bulbs suspended from the ceiling illuminating the space within the cage-like structure, while the territory of the viewer remains dimmed.

The Tudors: Art and Majesty in Renaissance England

The Tudors may have taken what they needed from others, but the admixture looks all their own. You might come to see how the Tudors used images politically, but you stay to piece together the subtleties of elite Tudor aesthetics in their broader dimensions.

Upon being told by his manager that under no circumstances can he continue to go onstage wearing spandex pants without underwear, a young musician begins performing in nothing more than a trench coat, black high-heeled boots and black bikini underwear.