Think boarding school and your thoughts will likely take you to a country setting where large trees, manicured grounds, and ivy-covered buildings greet a largely upper-crust student body. Since the first private boarding schools were established in the U.S. in the 1700s, this reality has prevailed.

Yet the stereotype may be changing. As a response to charges that schools must do more to help low-income students, a small number of boarding programs—two of them in Brooklyn—have been established in America’s cities. Brooklyn’s programs have been sponsored by Anchor, a six-year-old nonprofit that partners with schools to create boarding programs for undeserved youth. 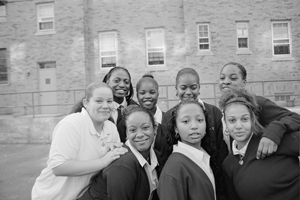 “Anchor grew out of the belief that what happens outside the school setting has a great impact on what happens in school,” says executive director Barbara Welles Iler.

Although Anchor is the only project of its kind in New York City, it is part of a growing national trend to bring residential education to the nation’s poor. As of September 2006, 30 urban boarding programs have been developed in Washington, DC, Philadelphia, San Diego, Minneapolis, and St. Paul.

Anchor currently runs two residential programs, both based in Brooklyn. The first, established at Catherine McAuley Catholic High School in Flatbush, began in 2001 and feeds and shelters 40 girls. The second opened in October 2006 at Fort Greene’s Bishop Loughlin Memorial High School. Although the school is coed, the residence is not; 20 boys, ages 14-18, live there.

That both Anchor programs are located in parochial settings is more coincidence than design, says Welles Iler. The Loughlin residence was previously used by the DeSalle Christian Brothers who ran the school. By 2005, their numbers had dwindled to 10 men. Similarly, the Convent at Catherine McAuley, once home to 40 Sisters of Mercy, was by 2001 home to just six. While both buildings needed extensive renovations, the fact that the dwellings existed made the establishment of dorms easier and far less costly than starting from scratch. Simply put, says Welles-Iler, “the infrastructure was there because of the church’s holdings.”

But students need more than an edifice, and Anchor tries to provide everything they require, from counseling to tutoring, athletic programs, and mentoring. “Our goal is to give low-income students who do not have enough support and structure outside the school setting what they need to succeed,” Welles Iler says.

Students at both McAuley and Loughlin stay in the dorms from Sunday evening to Friday afternoon but go back to their families on weekends.

The arrangement works. Jonathan, a 17-year-old from Coney Island, had been at Loughlin for two years when he heard about the boarding option from his handball coach. “I was doing bad my sophomore year,” he admits.

“I didn’t do my homework or study for tests. I’d go home, go out, come home, and fall asleep. Here, it’s structured. You have a two-hour study time and it’s mandatory. No one nags you. They tell you to do something and you are expected to do it. My average is now in the 80s and I’m in Latino dance, play handball, and do community service. Sure, sometimes the rules seem strict, but it’s a good program. It helps you achieve your full potential.”

Sitting in the computer room of the mansion-turned-dorm—the huge stone house was originally built for Brooklyn’s first Bishop, John Loughlin, in the 1850s—Aaron, age 16, is also effusive. “I had a 69 average last year. I could not find room for homework. Plus, at home if I didn’t understand something, I’d close my book and say, ‘Okay, I’ll do it tomorrow.’ Here, there are tutors or I can ask a counselor for help. At home I didn’t have a schedule. Now I follow one. I want to be here. I figure college will be like this and when I get there I’ll already be adjusted to living by myself.”

Malcolm, a 14-year-old freshman from Brownsville, came into the program straight from junior high. “Living here is hard,” he says. “I miss my brother, my house, and my cat, but you go home on weekends and there are breaks. It feels really good to go home and see my friends and lie in my bed, but I plan to stay here for all four years.”

Despite the newness of Loughlin’s residential program, staff have already noticed changes in the boys. James Smith, the senior boarding program counselor, calls it social development. “Some of the guys were kind of isolated when they came here. They stayed to themselves, playing video games. Gradually, they saw others get involved in after-school activities, things like dance, music, sports, chess club, and it had a domino effect. They saw the enthusiasm of other students and it fed their energy.”

The same contagion exists within the dorms at Catherine McAuley. Students with previously lackluster grades have seen improvement and credit the residence’s structure and imposed discipline for the gains. Indeed, the results are impressive: Every boarder who graduated in 2006 went on to college.

The demand for housing, says Sister Pat Gale, co-director of the McAuley program, is high. “We had 30 applicants this year and were only able to take six. That’s the hardest part for us.”

Not surprisingly, those who are admitted consider themselves lucky. Nubia, a 17-year-old from Harlem, says that she dreamed of going to a boarding high school relatively close to home. After learning of the McAuley program from her guidance counselor, she decided that it was where she wanted to be.

Still, the dorms are not what she expected. “I thought there’d be less help and guidance,” she says. “I thought I’d be more on my own. I didn’t expect to have a specific time to study and do homework. I didn’t think we’d all eat together. Everything is organized and on task. I didn’t like it at the beginning but it’s grown on me.”

Living in a tight-knit community, while sometimes difficult, has given Nubia a sense of belonging. “Sometimes if you’re alone in your room for a while, someone will check on whether you’re okay. It makes you understand that people care about you,” she says.

Sixteen-year-old D’Asia, like Jonathan and Aaron, believes that living away from home has helped her excel academically; it has also taught her to mediate difficulties. “In a building with 40 girls, attitudes will come out and you can get aggravated with a person,” she laughs. “There are sometimes big arguments but give it a month or two and we’re all the best of friends again.”

This camaraderie will empower students throughout their lives, says Anchor’s Barbara Welles Iler. Students are also strengthened, she adds, when they know that their families are invested in their education. That’s why both schools ask parents or guardians to attend meetings and pay a portion of their child’s food and shelter fees. While the actual cost of room and board exceeds $10,000 per pupil, each child’s family is asked for an annual $2,000 or $3,000.

None of the parents have bristled at the demand, says Ray Walker, director of Loughlin’s boarding program. “Parents tend to respect our input and advice,” he says. “Last week I was talking to a mother and she was giving me sensitive medical information. At one point she stopped and said, ‘You’re raising him more days and hours than I am.’ She acknowledged it, but it’s sometimes hard, and a very real push and pull exists.”

“We have to respond to the sacrifice of parents,” Welles Iler adds. “Sometimes the kid used to help out at home with the care of younger siblings or with chores around the apartment. Sending the child to a boarding program reflects a commitment from these families.”

And sometimes the commitment falters. In the five years since McAuley’s residential program began, says Sister Pat Gale, a handful of students have left. Reasons vary. Some had to follow their families when they moved out of state; others found the structure of the dorm burdensome or had difficulty dealing with the separation from family or friends.

Yet the majority have done exceedingly well. “I’ve seen tremendous resiliency, rays of light in these kids,” says Loughlin’s Ray Walker. “A lot of things are not right in their lives, but these kids want to better themselves. I think every child here would say that the program has helped them maintain their focus.”

Eleanor J. Bader is a teacher, writer, and activist. She writes the monthly Stoking Fire column on rhrealitycheck.org, and also contributes to feministreview.org, ontheissuesmagazine.com, The Progressive and other progressive, feminist publications and blogs.

Through the School of Good Citizenship, LigoranoReese have created compelling collaborations that activate dialogues related to previous subjects that they’ve tackled such as the meaning of democracy, the nature of the economy, and the contestation of truth.

Studio in a School

It was 1976 and New York City careened from one fiscal crisis to another. Upon opening The New York Times one morning, Agnes Gund, one of New York’s most beloved and generous philanthropists, learned that art classes in the city’s public elementary schools would be cut due to yet another budgetary shortfall.