An early morning stroll through the greenmarkets of McCarren Park, Union Square, or Havemeyer Street is rarely complete without seeing the black and white houndstooth check pants of young line cooks, tottering in their clogs as they balance great flats of pears and Swiss chard back to their kitchens. With friendly nods and a consultation of rumpled lists, local farmers dip into their trucks to produce great sacks of arugula and baby carrots for service that night at restaurants like Fort Greene’s iCi, the West Village’s Chow Bar, and Midtown’s Four Seasons. The City’s 44 greenmarkets have been a boon to home cooks and professional chefs alike since the first markets opened in 1976. An urban dweller has access to the same quality of produce with which culinary giants such as Union Square Cafe, Babbo, and Danube stock their kitchens. In the nation’s most densely populated city—with nary a vegetable patch in sight—that is a remarkable thing. 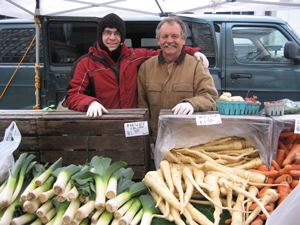 But what happens in the winter months, when only 16 of the City’s markets remain open, and when most of the 164 vendors’ fields lie fallow? John Schmid, whose Muddy River Farm in Goshen, New York runs stalls at the Union Square and Bronx greenmarkets, says he sees his clientele less often than in the warmer months when availability abounds, but not because the overwhelming trend towards seasonal and local foods is slacking. “There’s a huge difference in Yukon Gold potatoes that were only dug out of the ground two days ago, even this time of year when the vines are dead. It costs more, but people with very average incomes are willing to pay that little bit extra for freshness and quality.”

Winter is a challenge to professional chefs in an era when service of local, seasonal produce has become the measure of a restaurant’s caliber. “15, 20 years ago it was ‘How exotic is my menu? Can we fly in berries from New Zealand when they won’t grow here?’ At some point, because berries that are picked before they’re ripe and thrown into refrigeration are tasteless, the sacrifice of flavor was no longer worth it,” says Matt Wang, who recently worked on the opening management team for Mario Batali’s Chelsea bastion Del Posto, and who just launched the newest Dos Caminos satellite in Midtown.

A frequent patron of the winter greenmarkets, Eric Lind, executive chef at Park Slope’s Flatbush Farm, sees Brooklyn as an epicenter of interest in sustainable agriculture and local goods. “People are crazy for unusual or heirloom produce,” he says. But Lind prioritizes organic over local. “Organic doesn’t make headlines anymore, but it takes a lot of effort, and customers know that.”

In the winter season, Lind sources outside the area for organic basics. But he still uses local markets and farms for “smaller products and specials,” and he finds creative inspiration there despite fewer options. “I love the winter food, but by March, I’m tired of turnips,” he laughs, “and when spring comes, you’ve got another month in growing to wait. Pea soup in March just isn’t realistic.”

Paulette Satur, of Satur Farms on the North Fork of Long Island, is one of Flatbush Farm’s chief purveyors. She and chef husband Eberhard Müller—of Le Bernardin, Lutece, and Bayard's fame—supply many of the City’s top restaurants with seasonal specialty salads, leafy vegetables, heirloom tomatoes, root vegetables, and herbs. Satur is keenly aware of the frustration that can set in by winter’s end. “Chefs are often anxious to push and advance the season. I get calls for rutabaga in October, but I say ‘You have to wait! You’ll be so bored by March!’”

Although Satur doesn’t have stalls at the greenmarkets, she sells to Gourmet Garage and Fresh Direct and has noticed home cooks’ growing concern for seasonal produce over the past 10 years. In describing her flourishing mache (or lamb’s lettuce) business, she explains what makes New York’s winter greenmarkets so important: “America’s long been a dumping ground for cheaper seed. Individual farmers watch quality. We set higher standards for ourselves.”

When Satur and Müller tried to replicate the mache greens Müller had been raised on in the Black Forest winters of his childhood, they meticulously sought out the best European seed. “Most Americans only know how forced or hydroponic mache tastes. There’s no substitute for something grown in the open field. At first you say the mache is too thick, too coarse, but that’s how it tastes best. Produce has to suffer to be good, and everything should be this delicious. It is if you eat it in its proper season.”

Flavor isn’t all that chefs and home cooks are concerned with preserving when they shop at the winter greenmarkets. Schmid, who personally tastes each crop before bringing it to market, says health and safety attract shoppers too. “Clients trust us because we have personally watched our produce grow, and it hasn’t sat on a loading dock for weeks. My spinach is for sale one day. It sits on a supermarket shelf for 21.”

That said, what’s a chef in any kitchen to do in the winter? Wang says creativity lies at the heart of cold weather cooking in homes and restaurants alike. “There’s still an ingredient of the moment in the winter months, whether it’s burdock, Jerusalem artichokes, or salsify.” Schmid points to some empty crates in his van: “I sold 100 pounds of parsnips to a local restaurant this morning, and I have regulars that come in from Brooklyn and Queens, even in the winter,” he says. “It’s almost as if the clients decide how useful the market can be for them.”

Similarly, Wang says he and Batali spent meetings poring over seed catalogs with farmers when choosing Italian greens for Del Posto. If a client eats something at Del Posto and asks for it in the local greenmarket, the chef’s choice and the home cook’s tastes and imagination can actually create new trends in local agriculture.

Schmid agrees that home cooks wield surprising power: “New York cooks gravitate towards produce they’ve been served in restaurants or read about in The New York Times’ Food Section.” Foreign customers have actually gone so far as to bring Schmid seeds from their overseas homes and asked him to grow obscure herbs or vegetables in return for a small portion of the crop. “They know what they want, and they ask if we’ll grow it for them.”

Schmid gestures to the row of stalls next to his own: “It’s a very old relationship between the grower and the eater. That’s what you see here.”

At 2:50 AM on a September night in 1983 a 25-year-old artist is arrested by NYPD Transit Police for writing graffiti in the First Avenue station of the L Train. When police officers bring him, bound at the ankles and with an elastic strap running hog-tie-style from his hands to his feet, into the Union Square Police Station they decide that he is mentally disturbed and must be transferred to Bellevue Hospital.

Speaking in her studio at the age of 100, a Cuban-born artist who has lived mostly in New York for the past 75 years, nearly all of it in obscurity (she was 89 before she finally sold one of her geometric constructions, and survived until then only thanks to her husband’s salary and pension as a public-school teacher) reflects on the museum attention that has come her way over the last two years: “They say, ‘If you wait for the bus, the bus will come.’ I waited 98 years for the bus to come.”