They seem to appear out of nowhere. As you turn a corner, or step aside to avoid a stranger, or coast your bike to a pause in order to time the next stoplight, there in your peripheral vision you catch a glimpse. The sight stalls you in mid-step, mid-thought, mid-pedal-stroke: the striking image of a bicycle painted glaring white, adorned by plastic flowers, accompanied by a plaque and a chain that is more gestural than preventive. A Ghost Bike. 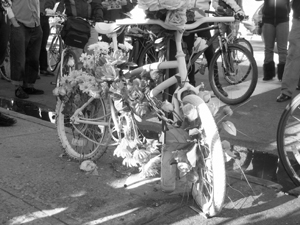 It’s difficult to say exactly how or why this phenomenon started, but it has spread virally, meme-like, much like the celebratory Critical Mass bike rides that now occur in approximately 400 cities spanning the globe. They—the Ghost Bikes—are certainly a fitting counterpart to those monthly communal, ritualistic celebrations of all things bike-ish, for just as a community should come together to revel and to celebrate, so too should it come together to acknowledge and to mourn its losses. And they are painful, these losses; they are personal, just as each one of these bikes is personal, and painful.

On January 7th, 2007, riders from all over the city paid visits to each bike that was installed over the course of 2006-14 in all, less than the 21 that were put up in 2005, but still quite a number of souls lost for no reason other than the fact that we, as a society, and as a city, have ceded the commons to the car. These deaths, much like roadkill on rural roads, are simply the toll that the culture seems willing to pay for the convenient expedience of the automobile. The riders ride in memorial, in a spirit—as they call it—of “love and rage, to make the point that even one such death is too high a price. 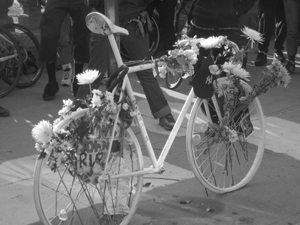 Ryan Kuonen, an organizer of the ride and volunteer with the bicycle advocacy group Times Up!, stands on the corner of Linden Boulevard and Williams Avenue in Brooklyn, the site of Shamar Porter’s death. She is speaking on behalf of Shamar’s Mother, Shawnette, who cannot find her voice through her grief. The sidewalk is crowded with cyclists and members of Shamar’s extensive network of family and friends, all listening intently to Ryan, whose voice wavers at first, then breaks as she describes meeting Shamar’s friends at a baseball game, the beautiful smile and shining eyes she has seen only in photographs, his love of sports, his love for his mother. Shamar Porter, at the tender age of ten, was killed on his way home from a ball game on August 5, 2006. The Ghost Bike, a small BMX-type much like that ridden by Shamar himself, was installed, with the cooperation, support and appreciation of Shamar’s family, on September 25th.

Visual Resistance, an NYC-based political art collective, started the ghost bike project here in 2005. They were not the first to make a Ghost Bike, as they point out on their website, and they have not been the last: “It was inspired by Ghost Bike, Pittsburgh, which was in turn inspired by a similar effort in St. Louis. In recent months, Ghost Bikes have appeared in Los Angeles, San Francisco, Highlands Ranch CO, Tallahassee, Chicago, Kansas City, St. Louis, Reno, Portland (OR), Huntington (PA), Pittsburgh, Austin, Seattle, Madison, London and Prague.” By now that list has no doubt grown longer, and soon these fitting, somberly beautiful memorials will be visible everywhere. These tributes go up in the spirit of love and rage, with the perhaps unreasonable hope that each one will be the last.