This story is only five blocks long. It starts at 1050 Manhattan Avenue in Greenpoint. Exiting the building, I open the door carefully. An elderly man with a greasy gray ponytail sits on my stoop sipping beer from a brown paper bag. He ducks when he hears the doorknob twist. We greet. My next-door neighbor is upset about the man hanging out on my stoop. “Can’t he hang out on his own stoop?” he scoffs. But the man and I have a silent agreement. As long as he only sits there and drinks he can stay. In return, the man accepts my packages from the mailman and hides them in a secret niche between the doorframe and wall. When I come home after dark the man makes me feel safe. This is the rent he pays for sitting on my stoop and drinking beer without being bothered. 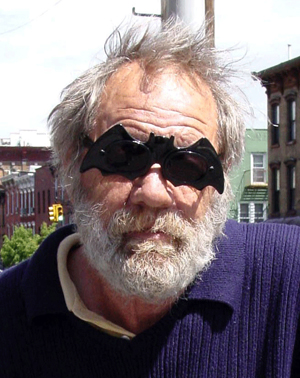 Waiting for the traffic light to change, I dodge a woman who tries to sell me a can of ham for $6.00. I also avoid eye contact with the crazy old man who mumbles incoherently and curses when I look directly at him. Recently I heard him say: “We have the blind leading the blind. The Russians need a psychiatrist for their president.”

On the next block I come across the little dirty old man. When I say “the little dirty old man,” every woman in Greenpoint knows who I mean. All day long this man limps up and down the street scoping for girls. Despite his age and his ailing hip he seems determined and confident. One day he’ll find her, the love of his life.

Whenever a young woman crosses his path, the little dirty old man briefly stops. He purses his lips as if to kiss and gestures with his wrinkled gnome’s hands as if to grab her breasts. The most human sound that ever comes out of his mouth is a distorted whistle. He can speak what seems like whole sentences in his dirty sign language. This makes the Polish girls at Payless and at the Peter Pan Café—his favorite stops—giggle. Sometimes you can see them playing tag with the little dirty old man.

Between Green Street and Huron, a bunch of Puerto Rican bums loiter in front of a bodega. They listen to loud music from the radio or stare at the small screen of a portable black and white T.V. powered by an extension cord coming from the bodega. Store and bum hours are from 7 a.m. to midnight. To attract customers, the owner of the bodega recently installed a ride for children next to the entrance. If you slide 25 cents into the Donald Duck ride it inexplicably bucks and neighs like a horse. The neighing duck serves a running gag for the bums. Whenever they feel down and have 25 cents left over, they treat themselves to the duck. One of them sits on the duck and rides it while the others clap their hands and hoot.

Every now and then the bums receive a visit from the Alpha bum, who has a much more advanced sound system installed on his Schwinn bike. They turn down their stereo to pay respect. The Alpha bum’s bicycle is lavishly decorated with Puerto Rican flags, pompoms, antennas, and speakers that blast Caribbean love songs.

Across the street a love affair is about to start or end. The petite man is an alcoholic in his early forties. Strands of untamed fuzzy black hair peek out from under his black leather hat. He wears a motorcycle jacket so heavy that he can hardly stand up straight. His woman is about twice his size. She is cross-eyed and wears her tight blue jeans pulled up ten inches above her navel, the pant legs tucked into white cowboy boots. Her dark-blond hair looks thin and permed.

I’ve seen them before. In the beginning, their relationship seemed promising. The man suddenly started riding a bike through the neighborhood. He even shaved and was seen holding a water bottle. But from there it went downhill. The couple would often stand yelling at each other in front of the Chinese take-out place. The woman would disappear for a while, and the man would tumble around the block with his head hanging to his knees, completely wasted for a week or two. Today they seem to be making up. They whisper sweet little nothings into each other’s ears and lean against the wall of the Chinese joint looking deep into each other’s bloodshot eyes.

In front of The Garden, an upscale health food store on the corner of Java Street, sits the “professional bum.” He is the youngest of all, mid- or late-thirties maybe. His skin is ashen and his body emaciated. He needs a cane to walk. He spends the store hours on a blanket reading or bothering passing dogs and asking people for money. “What about a little philanthropy?” he huffs at a passerby, who ignores him. People who shop at The Garden seem to make an extra effort to tie up their dogs a safe distance from the man. The sick man clearly disassociates himself from the bums who linger less than one block away.

Only the downest and outest of all hang in front of the Greenpoint Avenue subway entrance. Those are the bums who don’t have a home. While at night the others disappear from the street, these subway bums sleep wherever they collapse. Some look like they might die any day now. Their swollen red faces bear such deep furrows, that furrows are all they are. I can’t even tell them apart. They sleep in vomit and shit themselves. When they run out of vodka they crawl to the liquor store and beg for more money.

I’ve been drawn to these people since childhood. My very first love was a young hippie couple sitting on colorful blankets and begging for money in an upscale Bavarian pedestrian zone. I was three years old then, and managed to convince my mother to keep passing the couple to drop coins into their hat.

I feel at home on Manhattan Avenue. Between Eagle Street and Greenpoint Avenue stretch the full social strata of idleness. Greenpoint’s bums are a tragicomic reminder of the risks and temptations of the idle life. A life with plenty of time, a life without purpose, money, or hope. A life ruled by petty fights over cigarettes stubs, drunken laughter and contemptuous stares from pedestrians.

I remember a warm day when one of the subway bums discovered a pair of sunglasses shaped like the Batman insignia. He wore them for a week and everyone’s mood seemed to lighten a bit. Then he lost them and all went back to normal. Another time I saw the subway bums all peacefully sleeping on an old stained king-size mattress that they had dragged in front of the liquor store, their bodies intertwined like those of sleeping puppies in a basket.

These are the few moments of peace for the workless on Manhattan Avenue.

Jennifer Firestone is the author of five books of poetry and four chapbooks including Story (UDP), Ten, (BlazeVOX [books]), Gates & Fields (Belladonna* Collaborative), Swimming Pool (DoubleCross Press), Flashes (Shearsman Books), and Holiday (Shearsman Books). She co-edited (with Dana Teen Lomax) Letters To Poets: Conversations about Poetics, Politics and Community (Saturnalia Books) and is collaborating with Marcella Durand on a book about Feminist Avant-garde Poetics. She won the 2014 Marsh Hawk Press’ Robert Creeley Memorial Prize. Firestone is an Associate Professor of Literary Studies at the New School’s Eugene Lang College and is also the Director of their Academic Fellows pedagogy program.