Akira Kurosawa’s Yojimbo and its follow-up Sanjuro have proved to be two of the most iconic and influential samurai films. On the heels of their recent Seven Samurai re-release, Criterion unleashes new, pristine editions of these two—for American audiences—seminal genre classics. From Yojimbo (Bodyguard) emerged Toshiro Mifune’s scruffy, sardonic ronin (masterless samurai). With a hand occasionally reaching out of his haphazardly worn kimono to scratch his grubby beard, Mifune’s first appearance shattered previous conceptions of the nobly composed, well-groomed, effete samurai warrior. 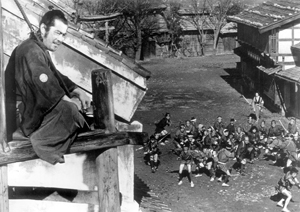 Kurosawa took inspiration from Dashiell Hammet (The Glass Key and Red Harvest), injecting noir elements into a black-humored jidai-geki (period piece). Kurosawa had become so comfortable with the paradigm of the western that he now made John Ford movies better than Ford. Yet in Yojimbo he turned the usually ordered moral universe of the traditional western upside down and in turn, laid the blueprint for Leone’s Fistful of Dollars, (which ignited the spaghetti western boom).

Yojimbo gets off to a rousing start (e.g. an inspired bit of visual metaphor that, without giving it away, sets the stage for all the ensuing violence and chaos). The second half feels less urgent, as it leaves behind the mayhem for a tedious pulp melodrama. Regardless, Yojimbo remains essential viewing for its stylistic innovations and gritty flavor.

Kurosawa loved dialectic structure—Rashomon was his definitive treatise on thesis, antithesis and synthesis. Yojimbo and Sanjuro are both dialectic meditations on class, order and human nature—and in classic Kurosawa efficiency they exist in antithesis to each other, making similar points in dissimilar milieus.

To his stately framing, suggesting an orderly world, Kurosawa introduces anarchic elements. Yojimbo follows rival, lowlife bands of gangsters who ravaged a desolate town, and the ronin who plays one against the other. Mifune’s character smoothly rafts along the anarchy the gangs created with their feuding and restores order. Considering all the bloodshed, order requires a high price.

In Sanjuro our scruffy hero stumbles into a well-to-do Samurai estate—one replete with elegant camellia flowers gently scattered about the otherwise symmetrical palace. Sanjuro, as our hero calls himself, helps a group of young, naive samurai rescue their master, who has been kidnapped by a rival. Sanjuro has given up propriety since he’s well aware that its folly brings only more bloodshed. While the young samurai look down at this unkempt wanderer who eschews samurai decorum, they are helpless without him. What makes this follow-up to Yojimbo both ironic and dialectic is that Sanjuro provides the chaotic element himself. He subverts the hierarchical, orderly Samurai clans, and his subversion seems the only hope of resolving conflict and restoring order. Tatsuya Nakadai plays the villainous foil to Mifune in both films. His presence is as charismatic as Mifune’s, if not quite so idiosyncratic. And wait till you see how they end their rivalry—possibly one of the most explosive film endings ever.

Prison Films and the Idea of Two Worlds

On the southwest corner of Washington Square Park, the logic of the carceral state plays out over a game of chess. Nahshon Thomas, an aging black man with thick, plastic-rimmed glasses, invites passers-by to come to the chess table, and a young, white teenager takes up the challenge. The older man sits with steady posture—a testament to his confidence and calm focus. He takes a drag from his cigarette as he makes his next move.