Noir as high school, high school as noir. The life or death impenetrable social horror of the hierarchies of jocks, babes, geeks and one cool loner get inverted through a prism of classic noir tropes: the femme fatale, the mysterious boss, the thug with a heart of gold and, of course, the letterman bully who rules the parking lot after study hall. As in high school, the kids invent their own slang. As in noir, slang = code, and means someone has to think harder to keep up. The story’s tight, the cast all gorgeous but true to their roles, and unknown enough to keep the focus on the narrative. The mannered moments are, for noir, precisely as mannered as they should be, and the air of absurdism and tragedy as intact.

Brick incarnates the best of ’06, when perverse auteurs pursued their vision with little money, and a determination to be individuals honoring traditions they admire. The best directors this year took on violence for pay, death from above, self-destructive love, teen angst, teen lust/violence, bloody murder, ex-cons and pure American psychosis. If that doesn’t comprise a perverse agenda, what does? Their films stand in contrast to the over-budgeted, self-aggrandizing wank of the big boys, who made great-looking product with scant connection between visuals and narrative, leaving only spectacle (Pan’s Labyrinth, World Trade Center, Babel). Every great film of this year built its greatness on the merging of story and cinema, until the wheel turned so fast you couldn’t tell them apart.

Capitalism sucks. Poverty sucks harder. The dead end of work without any redemption in sight sucks hardest. Géla Babluani brings a refugee’s desperation and a tragedian’s eye to an unprecedented merging of Jean-Pierre Melville’s hard-boiled mythology and the new Europe’s economic reality. This transgressive, breathless, art-thriller offers a simple premise/universe: everybody’s got a gun to his head—except the paying audience panting to see who’ll survive. Karma? Instant, baby, instant.

Of course you didn’t see it in the theatre. Neither did I. You knew it would be either a sentimental travesty or impossible to bear. Instead, it proves shockingly immersing, mostly due to director Paul Greengrass’ invention and restraint. He remains true to the scale of each moment, never bends events to make any sort of point and somehow avoids signposting emotions. A master of cutting from one ambient sound to another to establish transition and suspense, (evoking those two classics of ambient sound-cutting Downhill Racer (1969) and The Candidate(1972)) Greengrass also directs extraordinary performances from amateurs in their real-life roles. It’s not like homework, honest. But it will tear you to pieces.

Two smart grown-ups who could so love one another, if the guy wasn’t a repressed passive-aggressive manipulator and the girl wasn’t kind of seduced by being manipulated in a passive-aggressive way. Echoing Antonioni’s endless shots and blank faces, Nuri Bilge Ceylan follows his 2002 masterpiece Distant (Uzak) with an equally lustrous but more meditative exploration of how adults cannot or will not get out of their own way. With exquisite landscapes, ferocious sex scenes and monosyllabic arguments that burn like ten pages of Pinter, Ceylan and his wife (Ebru Ceylan) play the alienated couple as supposedly sophisticated people trudging through hurricanes of internal contradictions. That Ceylan can make those contradictions so apparent and heartbreaking is only one facet of his singular gifts.

Three Japanese and one Korean high school girl have to learn and play a punk rock song for their high-school talent show (The Blue Hearts’ ripping tune of the title). That’s it. That’s the entire story. Their route from being thrown together to learning their parts to finally getting onstage is observed with a delicate eye for nuance, and miraculous understatement. And it features one of the great dream sequences of all time: the guitarist’s boyfriend gives her a magic glove made from Jimi Hendrix’s hand, and takes her to the school auditorium, where all the Ramones await to wish her well. Proof that we should all keep up with Imaginasian’s screening schedule: www.theimaginasian.com/index2.php Pray for the DVD. 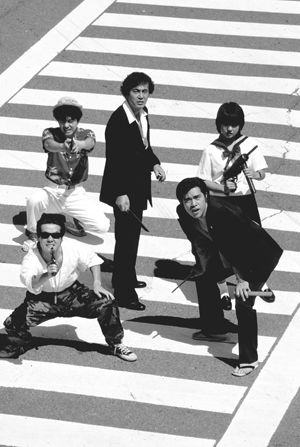 A 1981 mainstream smash hit in Japan of completely perverted, offhand, sincere, utter, impenetrable, weird strangeness. A prepubescent girl’s yakuza daddy gets murdered and she has to take over his gang. It starts like a Hayley Mills vehicle and ends with yakuza fucking on the girl’s floor and her wiping out a rival gang with a machine gun while screaming: “Kaikan!” (Ecstasy!). Director Somai prefers Tarkovsky-esque one-shot scenes that go on for hours, hypnotizing you as you grow mad with wonder at his skills and impatience at his pace. Proof that we should all keep up with The Japan Society’s screening schedule: www.japansociety.org.

Fabian Bielinsky’s first film, Nine Queens, played like an indie Mamet caper, only slower. Bielinsky was enamored, like Mamet, by the art of the con, and the symbiosis between player and mark. A quantum leap in style and ideas, The Aura is pure modern noir. A frightened man has fantasies above his station. Fate seems to give him a chance to play them out, but he’s not equipped for the game. He ends up with nada—not the girl, not the money, not the cajones—only blood on his hands up to the elbows. And when he gets to the end, as a frightened man in noir would, he wants to start all over again. Bielinsky’s cool, distanced wide-screen frames, bleached colors and sparse dialogue build an atmosphere of bad luck and dread. No doubt his next film would be even more compelling, if he hadn’t died in June at age 47.

The Straight Time of 2006, told with the same sinister dispassion and acted with the same neorealist star turns. Maggie Gyllenhaal submerges herself to the demands of the character as Dustin Hoffman did 18 years ago. Being a woman, her character has to eat a whole different brand of shit, and cope with an even more parasitical universe. But Gyllenhaal’s removal from her own fate, her indifference to certain indignities and her joys at certain pleasures, make her cycle from jail to freedom to who knows what ring especially true.

How did this film find an audience? By showcasing the aspects of American life about which Americans remain most in denial: class, drugs, the disconnect between hard work and results, the power of luck, the steamrolling acceleration of bad news and how some views of child sexuality are sanctioned and others are most certainly not. Steve Carell and Greg Kinnear bring the pain of watching real losers really lose, and Paul Dano’s primal scream is among the most harrowing moments of the year (I hope for his sake they did it in one take). That the film looks awful, and occasionally descends into slapstick below its own level, speaks only to its economic realities. That it remains subversive and honest—and that it found an audience—only adds to its grace.

Nell Painter's Old in Art School: A Memoir of Starting Over

Nell Painter made no mention of the fact that she was enrolled as a first-year graduate painting student at the Rhode Island School of Design (RISD) during her guest television appearance on The Colbert Report in March 2010. She wasn’t there to talk about the new career she had started from scratch, at age sixty-four, as an artist.

There are no rules!: Restored and Revisited Avante–garde Films from the Netherlands

Ben Lerner belongs to a rarefied cadre of writer: the poet-novelist. His sedulous understanding of poetry informs the language of his prose, which is beautiful and complicated but never lapses into gaudy braggadocio; it is empathetic, intellectual without being masturbatory, anxious yet assured, a deft coalescence of memoirish self-vivisection and critical commentary.

Anne Waldman is the author of the forthcoming Trickster Feminine (from Penguin) Voice’s Daughter of A Heart Yet To Be Born (Coffee House Press) and Extinction Aria. (Pied Oxen). She is the Artistic Director of the Jack Kerouac School’s Summer Writing Program at Naropa  Boulder, June 10-30, whose theme this year is The Capitalocene.