This box set of two horror Sci-Fi double features (from the producers of Fiend Without a Face) allows genre fans to wax nostalgic not only for bygone matinee and drive-in fare, but also for the days when afternoon and late night television airtime was ruled by old B-movies. Don’t let the exquisitely illustrated packaging fool you, these are not animated features, they’re good old-fashioned exploitation pictures. The replications of the lurid press art in the info-packed booklets display graphics that scream: “SEE! BODY SNATCHERS! CRUEL BEAUTIES! BLOODCURDLING EXPERIMENTS!” And the two horror features, Corridors of Blood and The Haunted Strangler, both starring the magnetic Boris Karloff, totally revel in sordid elements. For all their comic book exposition, they both set a chilling tone and compelling pace through inspired mise en scene and interesting story ideas. 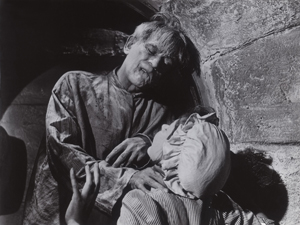 Boris Karloff in The Haunted Strangler Courtesy of the Criterion Collection.

Corridors of Blood (1959) generates its horror not from the supernatural, but instead from medical history – exploitation movie medical history that is. Set in 1840’s London, Corridors tells the tale of Bolton (Karloff), a benevolent surgeon who tries to prove, much to the chagrin of his skeptical colleagues, ‘pain and the knife’ do not have to be inseparable. The horrors on display range from amputation without anesthesia (ARRGGH!), to murder for profit and drug addiction.

The high definition transfer reveals just how A level the cinematography on this B-picture was. Shadow and chiaroscuro are utilized to eerie effect. For all its artifice, the inspired production design convincingly recreates the period with a somber tone. In contrast with the doctor’s affluent surroundings, the scenes in the Seven Dials slum (based on a real London neighborhood) exude sleaze, filth and desperation. The core of the film’s aboutness – however drenched in gore and sleaze—is the dichotomy between rich and poor.

Made one year earlier by the same team, The Haunted Strangler (1958) is almost as good as Corridors and every bit as sordid. Karloff plays a seemingly benign writer trying to prove the innocence of a man hanged for strangling several young women. There are dancehall girls, grave robbing, women slain in cold blood, and a bit of Jeckyl and Hyde -inspired action. Haunted, like Corridors, has its share of social commentary and allusions to revolutionary societal changes (the protagonists of each respective film speaks about surgery without pain and ‘innocent until proven guilty’ as novel concepts).

The two sci-fi pictures, The Atomic Submarine and First Man into Space, prove the campier films in the set, but still offer that vintage 50’s pulp fun. These two offer good old American machismo up against an unidentified floating object and hubris in space, respectively. Metaphoric possibilities are squandered, left and right. The arrogance with which the submariners face their adversary reflects their era, as does their own infighting with the one member of the crew who dares advocate peace.

The delightfully phony special effects reside a few notches above Ed Wood. The submarine is a nice model in a tank, and the sparse sets kinda resemble the inside of a marine vessel. These four films remind us how imagination was once much more conducive to escapist fantasy than slick CGI. A little imagination is convincing enough for these primitive modern myths with the gleeful tone of a boy’s adventure book.

By Gabriela Ponce and Sarah Booker

Ecuadorian writer Gabriela Ponce’s English language debut features an unnamed woman wrestling with the consequences of a failed marriage and an all consuming affair. Told in a stream of consciousness style that Book Culture describes as “like putting Viriginia Woolf and Ottessa Moshfegh in a blender,” Blood Red is a raw, visceral exploration of female bodily autonomy, power, and vulnerability.