Ed.’s note: The following was originally published in La Jornada, on December 18th, 2006. Reprint by permission of author. For Juan de Dios Gómez, cultural promoter and independent Oaxacan journalist, incarcerated in Nayarit for the crime of informing the public.

One of every five Mexicans has escaped to the United States in search of work. In and of itself, this face reflects the inability of the Mexican federal and state governments to generate a viable political policy of development for our country. It is clear that the Oaxacan social movement is an expression of the citizens’ disenchantment with the politics that continue to dismantle the countryside and national economy and generally diminish the possibility of a minimal state of well-being for Mexican families. 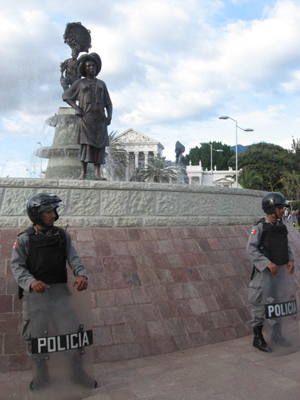 From march in Oaxaca, January 10th, 2007. photos from Indymedia.

The social outcry in Oaxaca is also an act of self-defense on the part of a population faced with the factious form in which the paramilitary and secret police (parapoliciacos) make use of institutions and indiscriminate repression in order to sustain this national project. The politically-skewed orders to detain, the assassination of social and community leaders, and the corruption of the judiciary system are a daily reality confronting the towns throughout our nation. Many of the organizations which have agglomerated around APPO (Transl. note: Asamblea Popular de los Pueblos de Oaxaca—Popular Assembly of Oaxacan Peoples), as well as others that have acted during the conflict of more than two hundred days, count among their grievances dozens of dead, political prisoners, cases of torture and other violations of human rights.

This movement’s innovation lies in the alliance between many of the political, indigenous, and non-governmental organizations, as well as large sectors of the unorganized public in order to reject en masse this dirty war waged against their legitimate demands as they publicize to the world the true face of the Mexican political system and its laws which have been implemented and approved by the three branches of the Mexican State.

Thanks to the publicity of The Other Campaign headed by Subcomandante Marcos, we have been able to confirm the accusations levied by the towns, cultural collectives the neighborhood and workers’ organizations, against this shameful reality generated by the Mexican politicians influenced by transnational and national economic interests. In fact, what The Other Campaign has done little by little for various regions of the country has become manifest in the formation of APPO—an allied federation triggered by the teachers’ movement in Oaxaca—and the councils that instigated the civil organizations. Within a few months, the social movement in Oaxaca brought together the inhabitants of the state’s capital, seized some of the telecommunications stations and shut down practically all government offices. In this way the citizen-led group reclaimed the spaces of democratic life that had been highjacked by a corrupt political class and its economic interests, leaving society without means of expression or institutions that could channel their concerns and without judicial means of resolving their conflicts.

Oaxaca also expressed a growing national sentiment: the legislators create laws that cater to groups driven by foreign and local economic interests, the judicial complex is so corrupt that it acts out of political indebtedness or sells itself to the highest bidder, and the Governors and the President work in pursuit of political profitability and in the interest of their political party or of the businesspeople and bankers who support them. The electoral system is so rotten that a large part of the state and municipal elections result in tribunals and now the federal election has as well, replacing the will of the people with an obscure interpretation of the law implemented by the authorities. Ulises Ruiz (Trans. note: governor of Oaxaca ) and Felipe Calderón (Transl. note: president of Mexico) rose to power thanks to the votes in the Trife (Transl. note: Trife is the Electorial Tribunal of Judicial Power of the Federation) and not to the votes cast in the polling booths. 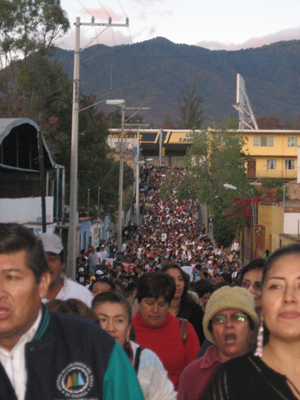 From march in Oaxaca, January 10th, 2007. photos from Indymedia.

Since his first day in office, Ulises Ruiz has attempted to solve problems through repression. However, this disregard for the law and the government’s violation of individual rights has generated a growing social consensus against the governing bodies and a radicalization of citizens’ political stances.

The federal government’s actions seem to copy those of Ulises Ruiz. The mass media’s widespread denial of our reality has done nothing to placate dissatisfaction or to resolve our country’s serious problems, but rather has fueled the wastefulness of State institutions and sponsored a social explosion of national dimensions. The imprisonment, disappearance and torture of hundreds of people cannot diffuse the discontent of hundreds of thousands of citizens. The only thing that the federal and state governments will achieve with the prolonged declaration of the state of emergency is to radicalize the groups that have opted for peaceful protest but who could, from one moment to the next, swell the ranks of armed movements. Furthermore, the arrest of sympathizers for the Oaxacan movement in other Mexican states, such as Veracruz, and of some of APPO’s directors in the Federal District, as well as the transfer of political prisoners to Nayarit (Transl. note—a state on the west coast of Mexico) has only resulted in the conflict’s extension throughout the country and the fusing together of socially opposed political parties—which had never before been allies—causing them to come together in a united left front, similar to APPO but on a national level.

One of APPO’s most important contributions to the struggle of the Mexican people against the oppressive system, is its collective leadership and the fact that those leaders engage in a popular assembly. This prevents negotiations with governmental institutions from taking place in the shadows; the resulting agreements are thus necessarily approved by the assembly before being brought to the negotiating table. This form of organization mimics the traditional indigenous councils, a natural evolution of political organization given that in Oaxaca 70 percent of the population is represented by indigenous peoples.

The façade of democracy has fallen in Oaxaca. What exists there is closer to a dictatorship than to a democratic order, unless the Woldenbergs, Krauzes, Sarmientos and Carlos Marin’s arrive at the conclusion that the PFP (Transl. note: Policia Federal Prevetiva—Federal Preventive Police) has imposed a “Oaxacan democracy” similar to the “Iraqi democracy” which, with the council of the IFE (Transl. note: Instituto Federal Electoral—Mexico’s independent elections commission), George Bush’s administration has so kindly brought to the Middle East. It is clear that, on the same day the White House’s belligerent discourse was defeated in the ballot boxes, here Felipe Calderón adopted it as his own: “The war on terrorism in our country will cost human lives.”

This delusional and inept interpretation of reality reflects the governing class’ intention to keep itself in power through the use of the military and police instead of attempting to reach a national policy that would, once and for all, remedy this heartbreaking condition of suffering in which the majority of Mexicans find themselves. This situation is fueled by the desperate desire to continue transferring the nation’s wealth to a group of Mexican and foreign plutocrats with no scruples, all of them beneficiaries of the politics implemented by the Mexican State. Oaxaca is a living warning sign of that which could, within a few months, become a national reality.

Fernando Gálvez de Aguinaga is a journalist based in Mexico City.

As I write this, it has been eight days since the killing of George Floyd in Minneapolis set off non-stop, and growing, demonstrations of anger throughout the United States and abroad. Surprisingly many city and state officials, and even some police chiefs, have endeavored to moderate the growing movement by expressing disapproval of Floyd’s murder.

Juan Pablo Langlois: Afterwards no one will remember

Walking into Juan Pablo Langlois’s exhibition Afterwards no one will remember, at Cindy Rucker gallery, was like entering a box of Dantean episodes.

With the world’s stages dark, this month’s Rail dance section looks at dance from a distance. Our writers explore dance as a salve for isolation, how dance bears up as streamed performance video, podcasts on the art of dancemaking, choreographies of dancing together, apart. Dance, for the individual and for the collective, has been a source of healing and human connection since time immemorial. I hope these pieces remind and inspire us to find new ways to support the dance community in this time of need.