In just six years, the administration of George W. Bush has managed to create a quagmire in Iraq rife with lies and corruption, civilian death and hopelessness, helping America to become reviled around the globe. It has bloated the federal deficit beyond the wildest imagination, squeezing wages for the middle class while enhancing corporate profits; it has turned the clock back by infusing social programs with fundamentalist religion. And to top it off, the courts and most every government agency have moved far away from the kind of oversight and regulation that consumer advocate Ralph Nader fought for all his life.

So, is Nader to blame for all of this? 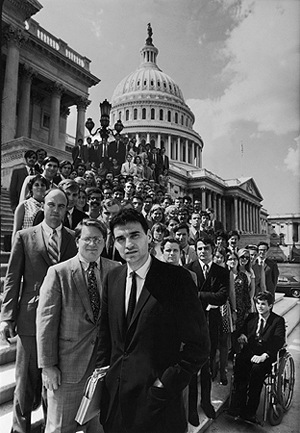 Still from An Unreasonable Man

Ralph Nader, the frumpy droop-faced loner whose first name sounds like a bark in a cave and last name sounds like nadir? Is he the reason the Cabal won and stripped Al Gore of his title as rightful heir to the salad days of Clinton?

This contentious subject—and the general issue of third parties in the US political system—does demand attention. An Unreasonable Man, a feature documentary released this month, is a first major attempt to tackle these issues. An Unreasonable Man puts forth enough opinion, history and information to restore the place of Nader in the American pantheon of public advocates, and it addresses the important issue of whether third parties can still play a role in national politics. But for a great many liberals, Nader still inspires nothing if not contempt.

To be sure, filmmakers Henriette Mantel and Steve Skrovan give the anti-Nader forces plenty of screen time in An Unreasonable Man. Led by 60s SDS leader turned moderate Democrat Todd Gitlin and Nation press critic Eric Alterman, the critics call Nader everything from wicked, deluded, dishonest, foolish and a man with psychological problems, to a “Leninist who believes things have to get worse before they get better.” Yes, they are correct in hindsight that the last six years have brought on what is probably the deathblow to any continuum of progressive politics rooted in the 1960s. But Gitlin and Alterman’s frothing and vituperation certainly don’t address the core problem that, for better or worse, Nader was challenging: the calcified and entrenched two-party political system in which both parties have become more similar than different in the last decades.

Nader has long made a strong argument that over the last decades, the Democratic Party has been courting business and special interests vigorously and that that has made them undemocratic. According to the history presented in An Unreasonable Man, this trend can largely be traced back to the election of Reagan (and his big business interests) when Nader lost strength because many legislators in both parties got nervous and didn’t support the sweeping regulatory codes of his proposed Consumer Protection Act. In the late ’80s, the Democrats accelerated their connection to business by courting the Political Action Committees that were a staple for the GOP. The film presents an interesting news clip pegging Congressman Tony Coelho of California—who said that there was no reason why the GOP should be getting all of the business contributions and thus hosted a conference bringing Democrats and business together—as one of the main culprits. But the important point is also made that the structure of the system is such that the Democrats really had no choice if they were going to survive in a political world where expensive media buys became all the more important.

Still, the Faustian bargains made with business during the Clinton years moved Dems even more to the center and alienated a good portion of a base by 2000. So how can one not pooh-pooh the Dems whining and “how dare you run?” stance toward Nader? When, exactly, is the right time to start raising the idea of third parties? While it’s true that there was a powerful argument made at the time that the Cabal waiting in the wings in 2000 was worse than most, that year’s hopelessly centrist edition of Al Gore also gave liberals nothing to rally behind.

Was Nader really going to win the election? Of course not. Yet given the importance of style in our slick electronic age, was he the right man to buck the system, fight for change, and represent Joe Six Pack? Not fully a hagiography, An Unreasonable Man nevertheless does its best to reprise the almost forgotten history of consumer advocacy largely credited to Nader. It is an impressive story of someone who, with great persistence, went after one of the sacred institutions of postwar America: the huge multilateral corporations that had formed even more immense power and had become increasingly intertwined with government at all levels. At one point early in his career Nader was often shadowed by private dicks hired by General Motors to try and get dirt on him. By the early 1970s, he had become one of the most respected people in America. A 1972 clip from the Phil Donahue Show finds him sitting next to John Lennon and Yoko Ono, and shows that a Nader presidential run was not a new idea as Donahue asks if he will run and points out that the McGovern team was calling on him.

The film also does a good job of analyzing the various accusations around the 2000 election, including a lingering one that Nader purposely campaigned in the all-important swing states after he said he would not do so. While Gitlin and Alterman and a few former Nader’s Raiders dig into him, the filmmakers rely on an Harvard political scientist Barry Burden who says he performed a quantitative analysis of Nader’s path in those months and that he did not, in fact, campaign more than he said would in the swing states. The section also makes much of the fact that Nader was not allowed to debate at any point and was even forcibly evicted from getting into the buildings by the corporate company that runs debates. One of the most well-known pro-Nader voices in the film, James Ridgeway, who has written extensively on neo-Nazis and many other miscreants, says of the Democrats’ treatment of Nader, “They are the meanest bunch of motherfuckers I have ever run across.”

Unlike many, I never begrudged Nader for not standing down after he got a good sliver of voters. Maybe the supporters were people that wouldn’t have come out anyway, as one sympathizer in the An Unreasonable Man points out. Sure, I was pragmatic and did vote swaps during 2000. I supported Nader because if you believe that the political system needs to be more diverse, there will be to support this idea sometime, because the Democrats will always say that this is “not the right time.” What emerges from An Unreasonable Man is that Nader’s unwillingness to stand down fits with his character. And that’s something to respect even if, in hindsight, it has lead to drastic consequences.

As the Democratic Party now regains power in Congress, and Hillary and the many other presidential contenders raise mountains of cash from special interests, it may be even more important to have a Nader-type move in and keep them in check. Given the current situation, though, chances are that anyone daring to play that role would probably be ripped apart, alienated and blamed even more then Nader was in 2000.

An Unreasonable Man opens at IFC Center on January 31st.