Church bells rang and Chapel/Chapter, a performance work by Bill T. Jones, began. The location: the newly refurbished Gatehouse, an old water pumping station in Hamilton Heights. The time: evening on a cool night in December. The subject: violence and murder. The motive: we are all witnesses and judges. 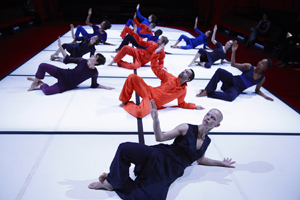 The December evening spent watching Jones’ site-specific work has been made memorable for months to come, for the characters introduced to us through the disturbing, hard-hitting theatrics and physicality of Jones’ choreography. Jones’ work is usually composed through layers of thought that result in complex, socially and mentally challenging pieces. This newest work is no exception. Through visual and oral narrative, Jones examines three stories of violence. The first two were highly publicized news stories: the murder of the Soto family, and a father’s abuse and murder of his daughter. The third was taken from the experience of a performer who, as a young boy at summer camp, witnessed the drowning of his friend.

Before the bells rang, we walked into a room shrouded in deep red cloth. A chapel window motif was laid on the ground in white tape composed of 10 squares and an arch, much like that on a basketball court. Eight dancers wore bright orange jumpsuits and walked aimlessly, eyes closed, along the arena. Five other dancers dressed in rich blues and purples gently guided the sightless dancers away from the audience seated around the stage, and into the center of the room. Our participation began.

“It was the summer of ’88, we were alone at summer camp…” the dancer read. And as the story continued, two men moved within a square on the floor. Their movement was playful, subtly raunchy, and low to the ground as one man ducked under the arched back of another and they intertwined, often with slight hip thrusts.

More formalized than Jones’ past work, the choreography throughout the piece effected a brutally physical movement laced with strong, intent limb placements. These stories were brilliantly timed with interactive video. At one breathless moment, a dancer’s leap landed on the first square of a hopscotch pattern projected on the floor. Later, a projected map of the neighborhood where the Soto family was murdered became outlined below the dancers.

The relationship between camp friends was played out several times, as was the murder of the Soto family, and the father locking his daughter in the basement, feeding her only cat food, and subsequently murdering her. “That night I had had enough,” the narrator repeated, “If I had to do it all again. I would have just taken her to the police precinct and dropped her off.” We knew every story backwards and forwards. We recognized every repetition of the fast, frantic partnering and low-to-the-ground gripping movement that mimicked the haunting nature of these tales.

Disturbingly playful ’50s sitcomish interludes popped up throughout the piece. Dancers sitting with the audience hooted and hollered while playing games of charades to spell out phrases such as “The road to hell is paved with yellow brick,” or “The road to hell is paved any way you like.” Added to that was an all too real portrayal of the Soto family dog by Erick Montes; Sopranist Alicia Hall Moran who played a judge and read from actual courtroom scripts of the Soto murder in a high, staccato voice; and intense, church-like music mixed with frenetic electronic scores. This dizzying collage of art forms intent on portraying experiences of unrelenting violence left me in the sort of eerie, thoughtful state-of-mind that I think Jones wanted.

Bill T. Jones Dancing Through Disease in Can You Bring It and Afterwardsness

Can You Bring It: Bill T. Jones and D-Man in the Waters is a new documentary about Bill T. Jones’s seminal, AIDS-era work. Afterwardsness, his newest production, reflects on the COVID-19 pandemic and ongoing assaults on Black lives. Viewed together, they offer seemingly contradictory but ultimately profound lessons on dance’s role in moving through personal and societal grief.

Perception comes gradually, when the mind is quieted enough for awareness to seep in, and even then, it is never fixed. Mingling visual and aural work, lineage and legacy, Jennie C. Jones: Dynamics infuses the Guggenheim Museum with minimalist abstractions and tonal callings. The first Black woman to have a solo exhibition in Frank Lloyd Wright’s iconic rotunda, Jones throws open long-held narratives of art history, expanding the tracings of inspiration and influence to include both Black and female histories. Mining a vein of work in which paintings stand as sculptures, music is rendered in graphic statements, and color becomes a source of light, Jones’s work throws us off balance, requires us to shift and reposition ourselves in response to her slow reveals. As her gentle harmonics roll down from the oculus, the space itself seems to sway and expand.