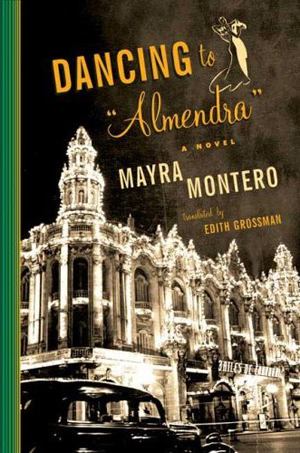 “It all goes back to the hippopotamus,” explains the enigmatic zookeeper, Juan Bulgado. The unfortunate animal is killed in 1957 Havana on the same day that Umberto (Albert) Anastasia is riddled with bullets in a barber’s chair at the Park Sheraton Hotel on West 57th Street. The hippo’s death was a warning to the portly head of Murder Inc. But the news came late, and with this tip, journalist Joaquin Porrata, a 22-year-old slip of a man, turns pro. The day before page one of this awe-inspiring novel, Joaquin was a gossip columnist. In Dancing to Almendra, he investigates underworld Cuba.

A little over a decade before the time Almendra takes place, the U.S. government struck deals with incarcerated mobsters, including Lucky Luciano, who was deported to Italy and released from his sentence for “services rendered.” Friends again in 1957, the mafia and the U.S. were as staunchly anti-communist as they were anti-facist. But the Cuban government didn’t want to do business with newcomers. And so another war, a quiet one, began. This is the world of Almendra., Luciano comes up, as do all the usual suspects. Mayra Montero’s historical accuracy is impeccable.

But back to the hippo. Along with human bodies, it’s fed to lions in the zoo. Who does the feeding? “Page-turner” does not do the breakneck momentum of this book justice.

Zookeeper Bulgado turns informant to Joaquin, as long as he agrees to introduce him to his idol, actor George Raft, now host of the Capri Casino. The meeting that later occurs is emblematic of Montero’s genius.

“It was enough. All the people around Raft held their breath, as stunned as I was, because it seemed that Raft had found a twin brother, a guy who didn’t look anything like him but who did look like him, identical in another dimension, another accidental level we all could see.”

Throughout this extraordinary work, Montero shows us the doubling of consciousness that comes from a country in transition, limning the body and the body politic in perfect symbiosis. Almost everyone has a double life. Or a double. Until they don’t. Central to Almendra is the characters’ reception to what lives and dies as cultures evolve and interact with each other.

Already wan, Joaquin grows paler and thinner as he probes the case, and falls in love with Yolanda, born Fantina, a one-armed gangster’s moll, much older than himself, who’s been in love with Roderico, alias Rodney the great, a gay Eurafrasian leper in charge of productions at the Tropicana. In his youth he’d been in love with Odin, a Swede. And when Roderico was diagnosed, Odin found another man. The effects are devastating.

“Yolanda, haven’t you ever asked yourself if I infected anybody with this disease?” asks Rodney when she proposes marriage. “I did it because I was jealous.”

Yolanda recounts, “He said he dug his nails into him when he still had nails.”

Yolanda, like the other characters, experiences life as counter to what they’d thought they believed, knew, or felt. Living headlong, they turn clichés of difference upside down. Much of Montero’s artistry might go unnoticed because of the barreling nature of the narrative, in which all characters are integral to the conclusion. (Take the minor Jar Boy, so named because when he was a kid, he played with his stillborn twin’s pickled fetus.)

But Montero’s circus characters aren’t literary gimmicks. With Rodney, Montero reveals much more than her winning ways with “unsympathetic” characters. As Rodney loses more and more parts of himself, he epitomizes the decay of pre-revolutionary Cuba. Treatments of gold injections were called upon. But no amount of gold, just as no amount of mob money funneled into the Tropicana, Capri, or any Havana clubs, can stop the change. The self-awareness of almost all of Montero’s characters makes for a heightened experience, and takes Almendra to a double whammy of a conclusion, unexpected (to say the least), and irrevocable.