In 2004, ABC, CBS, and NBC spent a combined total of 481 network minutes covering the Martha Stewart Trial. The number of minutes spent covering Abu Ghraib? 336. It’s no exaggeration to suggest that most Americans know more about Brangelina’s international jaunts than they do about the US government’s. We’re a nation enamored of celebrity culture. 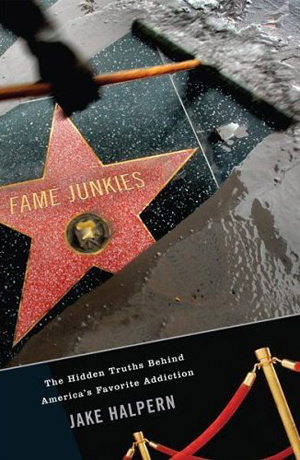 It’s this cult of celebrity that NPR commentator Jake Halpern delves into in his most recent book—seeking out and interviewing those individuals for whom fame is “a full-blown, all-encompassing obsession.” Dividing the book into three sections that profile three distinct celebrity “subcultures”—aspiring stars (particularly kids), personal assistants to the rich and famous, and ultimate fans—Halpern tours the underbelly of America’s fame factories. The result is an intimate portrait of the myths and mindsets that cause much of society to idolize those who have achieved more than a mere “two minutes of fame.”

America’s obsession with fame was ignited in the 1980s, the decade that witnessed not only the birth of cable television, but also one of the first shows dedicated to celebrities: Lifestyles of the Rich and Famous. Roughly twenty years later the number of cable subscribers has more than doubled, while the number of channels and TV shows requiring telegenic folks has exploded. In recent years, this increase in media jobs has combined with the popularity of reality TV to democratize fame, making it appear that anyone can become a celebrity by simply “being themselves.”

If the draw of being famous is fairly clear, the question of why we are so smitten with observing celebrities is more difficult to quantify, although academic research abounds. Two theories—the Belongingness Theory and Prestige Theory—suggest there are evolutionary roots for our fascination with the powerful. Another theory takes into account the high that comes from “basking in the reflected glory” (BIRGing) of a favorite star or sports team. Then there are other studies that reveal celebrity worship as a coping mechanism for loneliness. America is increasingly becoming “a nation of loners,” with individuals spending less time with their families, friends, and neighbors, and more time pouring over tabloids with news about Britney and TomKat. Celebs become a reliable pseudo-support group, and for that we treat them like loved ones, or even religious idols. One of the most telling moments in Fame Junkies is when Rod Stewart-devotee Marcy Braunstein discusses the way her feelings about Rod challenge her ability to be a good Christian. “I wish that I were as passionate about Jesus —and the life of Jesus and everything that Jesus said when he was on this earth—as I am about Rod,” she worriedly comments.

The notion that the pursuit and appreciation of fame arise out of a longing for love and acceptance isn’t such a shocker. However, as Halpern notes, while in previous eras discrepancies of wealth may have been the cause of revolution, in the 80s and beyond, the disparity between the rich celebs featured on E! and the average Joes and Janes watching them seems to do no more than fuel adoration. And how can we despise actors and actresses when “they’re just like us” (or so claims Us Weekly in the weekly section “Stars—They’re Just Like Us”)? “Whether the public has grown delusional or not it seems like they want to feel this connection to the celebs they love, which is why they refer to them on a first-name basis,” comments Janice Min from Us Weekly “That distinction between us and them no longer exists.”

Celebrities may be “just like us,” but most people—including those interviewed by Halpern—will probably never be just like them, and as a result Fame Junkies has a hint of sadness to it. Though Halpern is an empathetic interviewer, he can’t entirely make up for the fact that his subjects do seem slightly delusional.

That said, there’s something endearing about the unwavering hope of Halpern’s subjects. Celebrity-worship has given their lives meaning, and who can begrudge them that?