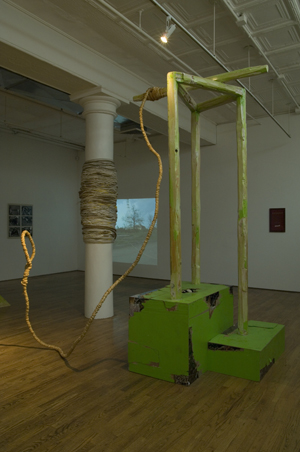 While growing up in Louisiana, artist Stephen Rhodes was subjected to multiple classroom screenings of a 1962 short film entitled “An Occurrence at Owl Creek Bridge.” According to Rhodes, the film was never contextualized for the students, but repeatedly used as a mindless time filler by lazy teachers. Based on an 1891 short story by Ambrose Bierce, the film opens on a prisoner in civilian clothes condemned to be hanged on the eponymous bridge. A noose is placed around his neck, but when he is dropped from the bridge, the rope miraculously breaks. He falls into the creek below and desperately flees through the woods. Finally reaching his home, the fugitive is just about to kiss his wife in ecstatic relief when he is literally snapped back to reality—his arduous journey to safety was a daydream, condensed within the split second preceding his death.

Rhodes embraces this dissolution of reality into fantasy in his sprawling installation of video, sculpture, photographs and drawings. Using the narrative of the story/film as a launching point, he riffs on themes of memory, historical dislocation and temporal shift. He focuses on the hangman’s rope as the crucial device that determines failure/survival or integrity/death. Rope is everywhere, running through the work, the space, and around the gallery’s columns; a common thread metaphorically tying his objects together. Throughout, Rhodes tempers the tragedy of his chosen narrative by embracing a low-tech, even amateurish aesthetic, and injecting moments of comic relief.

Three large sculptures depict life-size gallows with shattered platforms. In two of them, the nooses seem to have come to life—hardened with clear resin; they exaggeratedly snake off of their posts and into the room. Three sets of black-and-white photographs entitled “Not Handbook Figures” (2006), punning on “not/knot,” depict hands manipulating an increasingly tangled rope, as if they were from a useless how-to manual. These works, with their textual references, black-and-white austerity and gridded layout, strongly resemble the nonsensical, repetitive labors of conceptualists like Vito Acconci or Bruce Nauman. Elsewhere, a series of six densely layered drawings combine text, collaged photographs and a snarl of looping marks. At the center of each is the image of a black man, gesticulating wildly with wide eyes, extended tongue, and splayed hands, provocatively introducing the otherwise absent figure of African Americans into this meditation on nineteenth-century lynching. In the back gallery, seven photomontages mix a variety of images, from family snapshots to crumbling buildings and clothes strewn in the woods, suggesting decay and entropy. Each framed collage is negated by a giant “X” spray painted across the front. This act of obfuscation is reinforced by the dim lighting in the gallery, which renders the prints hard to see.

All of these works feel like supporting players, however, to the three completely absorbing videos projected large on the gallery walls, endless loops of flashing images, with no beginning or climatic resolve. Two of them depict Rhodes’s versions of the “Occurrence” story: A young man, presumably the artist himself, dressed in Civil War-era clothes, a snapped noose dangling from his neck, flees through contemporary rural and suburban landscapes. Often the rope appears on its own, a disembodied lone traveler. Rhodes’s deliberately disjointed temporal leaps between the nineteenth and twentieth centuries defy resolution; at one point, we see the dates 1979 and 1876 beside each other. A third video, screened in a back gallery, is a rapid-fire collage of quick cuts from The Buccaneer, a 1958 film about the War of 1812. History, Rhodes seems to believe, is a vague and malleable entity, shaped as much by its telling as the truth of its events.

While Rhodes creates a dynamic environment with his installation, not all of the pieces operate with equal success. The frenzied, gestural drawings clash with the cool conceptualism of the seventies-style photographs, and the stiff resin rope tricks are no match for the active animation of the rope in the video. Rhodes’s layering of multiple motifs is ambitious, but some of his many themes are left undeveloped. He introduces the idea of water in a handful of sculptures made of garden hoses and in one of the videos where it is inexplicably colored acid green. However, the importance of the element in the installation is never fully teased out (a reference to Owl Creek? Or the watery nature of memory?). Same with his references to family—a word that appears in his drawings along with “father” and “genealogy.” They are subliminally evoked in some of the snapshots in the collages, which may have come from the Rhodes family album, but their relationship to the larger narrative is fuzzy beyond an attempt by the artist to pepper his work with autobiography.

All in all, this exhibition’s whole is greater than the sum of its parts. While perhaps less might have been more, Rhodes’s ambition and excess make his mediations on memory, history and narrative thought-provoking nonetheless. It will be interesting to see where this young artist goes next.

David Rhodes speaks to McArthur Binion about his life, career, and current exhibition.