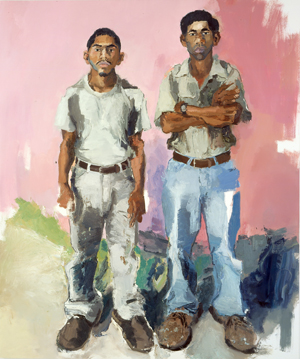 John Sonsini’s paintings make me think like a Racist Pig—the same way de Kooning’s Women make me think like a Sexist Pig, or at least a very interested little Dutch boy who’s taken a “wrong” turn somewhere in Amsterdam’s red light district… But anyway, back to The Racist. Sonsini’s portraits of immigrant Latino day laborers, presumably plucked from various Los Angeles construction sites and Home Depot parking lots over the years and paid well for their day’s work sitting before the artist’s easel, are depictions of men who fail to fill out their shoes. These men sit or stand in the foreground of their picture planes as if, in the time it has taken Sonsini to paint them, they have unknowingly shrunken in their preposterously large boots while their garments have slumped and buckled under an intensifying gravitational load.

How do these diminished men, in spite of their calm, straightforward gazes, invite such ugly objectification from The Racist? Perhaps it is because the figures are so removed. The men have no stage or props upon which to express their individuality, identity or ethnicity. Aside from their strangely generic clothing, they have nothing on but a mere eight-hour day: no families, no personal items, not even a spackle knife or tape measure to provide some narrative. Though we know rationally that each of these figures has come to Los Angeles with a compelling back story, upon Sonsini’s canvases, they exist outside of any context whatsoever, supported only by pale pink or luminous bluish-green backdrops, which, while worked with elegant brush strokes, feel both undernourished and strangely claustrophobic.

Out from their bland, functional, presentable attire—blue jeans and tucked-in, short-sleeve polo shirts—pop earnest faces with neutral expressions. These are not Philip-Lorca diCorcia’s sexy LA street hustlers, nor Kehinde Wiley’s monumentalized B-boys. These are modest men. They know better than to ask for much. They might not even know the language used to “ask.” Cloaked in humility, these men are, however, tough as nails. As workers, they don’t quit. They ignore whatever pain they’re in, they maintain their dehumanized and yet all so human poise, and they may even, on some subliminal level, be seen as a threat. The Racist would assert with pathological suspicion that these untaxed workers are in fact stockpiling fortunes for early retirement with their extended families back in Mexico, Guatemala and El Salvador. Are these men competitors?

But their poses, which aren’t entirely relaxed, surely aren’t confrontational either: Sonsini isn’t giving us a staring contest. In fact, one might imagine that the models are experiencing a sort of gentle, therapeutic stroking by the stillness that surrounds them as the artist quietly brushes his canvas—a luxury, in other words, of meditation. On the other hand, The Racist asks, Aren’t these guys already sitting down on the job, taking a siesta, every chance they get anyway? In truth, Sonsini has probably given his sitters an even more challenging day’s work than they are accustomed to by asking them to sit still, relax, stop working—and be studied, be visible. For whether Sonsini is rewarding these unregistered immigrants with a “light” day, or torturing them with sustained motionlessness and enforced laziness, one thing is for certain: he’s performed something of a miracle in just getting these men to register at all. For in day-to-day life, they are, frankly, and necessarily, invisible.

Regardless of what these men are thinking, by increasing the scale of their shoes, Sonsini makes their heads diminutive and draws attention to their inner psychology, or lack thereof. Oddly, while looking at the paintings at Cheim & Read I found myself thinking of the current President of the United States, whose head always looks so teeny, popping out of his extra-broad-shouldered coats. Couldn’t the man find a proper tailor to make his head look a little bigger, more Presidential? He literally looks like a pea-brain.

But back to Sonsini, whose sitters, though seemingly fit and muscular, find themselves in a similar predicament of implied intellectual inferiority. As their clothes seem to slip down and form piles of laundry at the bottom edge of each canvas, held in place only by their enormous shoes, the men feel suspended in time, right where they’ve always been. Boy-men, in other words, standing in men’s shoes, obliged to fill them, ageless. The issue of the lack of a green card notwithstanding, this may be the real reason why, tragically, we fail to see these men anywhere but in Sonsini’s carefully made, deliberately earnest “construction sites,” painted with the tenderness of a mother looking with pride at her hard-working sons, her only hope for survival.

By painting what he sees (with more than a touch of caricature), Sonsini identifies the very thing that makes these men invisible. Yet despite his gutsy one-on-one painterly interrogations, Sonsini—who was born in 1950 and has been making paintings for over thirty years—may also be seen as a subcontractor and as an exploiter. But his art surely gives back. Its value is that is doesn’t so much allow us to see, but to sense the racism in our blindness, and to feel embarrassed by it.

Like de Kooning, the painter need not have remorse for his model, his debased muse. This being said, Sonsini has no further responsibility to his model other than to paint and pay the day’s wages. But while de Kooning’s figuration brings us to a place of splurging excess, ultimately interrogating and exposing himself as a monstrous, gonzo womanizer, Sonsini’s paintings are academic, reasonable, copasetic, reassuring. They are honest, nine-to-five paintings, honed, telling and ethical.

There have always been multiple entry points for viewers to come to terms with John Sonsini’s bravura portraits of single or multiple male subjects, most of whom are Mexican day laborers, and “the age of Trump” has unexpectedly provided us with yet another.