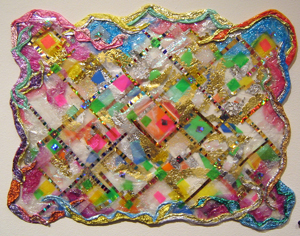 As a young artist recently arrived in New York City and seeking some kind of exposure to the big league Soho gallery world, I availed myself to the weekly critique/look-see sessions then being offered by the Drawing Center. I showed up for my five-minute evaluation, which was delivered by the influential artist, writer and curator Thomas Lawson, then working as an advisor. After glancing briefly at my portfolio stuffed with collages I’d been working on in a hopeful frenzy (a mélange of gold and silver leaf, disco-tape and soft core porn clipped from S&M magazines), Mr. Lawson dismissed me by asking if I were familiar with the work of Thomas Lanigan-Schmidt. I’d never heard of him, but was told that he showed at the Holly Solomon Gallery, where I immediately rushed to see a small installation of quirky wall-mounted altars festooned with tinfoil and glitter, along with strings of “ornaments” including iconized rats. At that point I realized that Lanigan-Schmidt’s pseudo-Byzantine Funk-Pop vision, transgressive commingling of the sacred and the profane, and his use of reflective and transparent materials were so utterly unique, that it would be totally redundant for a poor schnook like me to try and cultivate anything in this field. Besides which, his apparently naïve devotion to his religious and sexual constructs were so authentic, that I simply abandoned the entire body of work, knowing I’d never be able to achieve his level of artistic honesty. Instead, I became a fan, trying to make a point of seeing all his shows at Solomon and wherever else I could find him.

Times and fashions change. The Pattern-Decorative movement that had counted him among its brethren was soon eclipsed by Neo-Expressionism, but as the East Village art scene started to take off, Lanigan-Schmidt, a denizen of the neighborhood as well as an artistic eccentric with deep connections to the Gay Rights movement, was soon adopted as an exemplarily member of that artistic epoch. The cruel mill of time kept up its pernicious grinding, and between the devastating plague of HIV, the collapse of the East Village scene, and the fickleness of an art market that now wanted to “think” rather than “feel,” Lanigan-Schmidt frequently dropped from view. Years would pass and I would wonder if Lanigan-Schmidt was still alive, still working, still collecting his glittery treasures, still twisting aluminum foil and wrapping colored cellophane over his wacky icons. Once, while scavenging through the remainder bins in the basement at the Strand, I was thrilled to find a third-hand copy of a Lanagan-Schmidt catalogue printed in the mid eighties, but at this point in the New Millennium, Lanigan-Schmidt seemed more a myth from a long-past golden season, someone whose name you could mention as a talisman to a small coterie of initiates who shared an appreciation for the most brilliant and gaudy eye to have ever noodled “trash flash” together.

Since the mid-eighties, a couple of generations of artists have appeared on the scene brandishing foil, pipe-cleaners, cellophane, glitter, and dime store doilies without a clue about the aesthetic precedents for this material exuberance. Happily, a couple of years ago, I spotted a blurb for a two-person show at one of the new galleries popping up on West Twenty-third Street, Pavel Zoubok. Stapled to the Soul paired collages by Lanigan-Schmidt and Jerry Jofen, who had in common an obsessive use of Swingline staples as both a fastening agent and decorative element.

Placemats and Potholders (Memory & Desire), with its informative catalogue and essay by the New Museum’s Dan Cameron, brings us up-to-date with the spiritually transformative practice of Lanigan-Schmidt. “Jackie and Mona” (2006) is like a glorious “box of chocolates” with thick strands of foil forming bezel settings around gem-like blocks of silk, plastic pearlescent nuggets, and comically altered puffy photos that include a bug-eyed Shakespeare and a rendition of a big haired “Mona Lisa” recalling Nancy Sinatra during her These Boots Were Made for Walking heyday.

A foray into total abstraction in some of the “placemats” departs from his normal focus on heads and figures clipped from fanzines or snapshots. In works like “Nymphs and Satyrs Denounced by St. Augustine” (2006), he explores more purely the formalism of the decorative. In “Placemat (Bitter Celibate)” (2006), the collage’s shape parodies that of a Baroque picture frame, with rounded corners and scalloped edges. Bands of glittering color form diagonal grids echoing harlequin check, and fragments of golden florets, rhinestones, lozenges of fluorescent pink, magenta, green and sapphire blue are encased within layers of cellophane, recalling the deep, lacquered finishes of medieval enamels. By eschewing photos and ironic comic kitsch, he reduces the work’s exterior associations with movie stars, friends, lovers, and art history. Instead, pieces like “Midnight Bubble Bath” (2006), generate their potency from the integration of their unique color combinations, their raised line-work of pipe cleaners or twisted foil, and their reflective-and-shiny versus dark-and-matte finishes of their surfaces. Perhaps, like the empty place left for Elijah at the Seder table, Lanigan-Schmidt sees the ‘Placemats” as memorials for friends absent and the “Potholders” as emotional insulation for desires that still burn hot.

A&E Sessions at Hauser and Wirth comprises works made as a result of Paul McCarthy’s multi-disciplinary project A&E, which was produced by the artist during improvisatory performances involving him and the Berlin-born German actor Lilith Stangenberg.