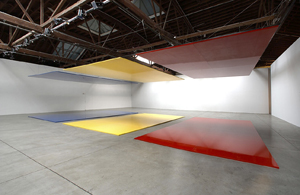 Robert Irwin’s current show at PaceWildenstein is physically staggering. Its title, Whose Afraid of Red, Yellow and Blue 3, is taken from Barnet Newman’s 1966-67 painting. At 96 by 214 inches, Barnet Newman’s painting is pretty big, but Irwin’s installation dwarfs it. That is the idea-to eradicate objective reality. Newman eliminated easel painting, Irwin is eliminating everything else. He has installed six huge, honeycomb aluminum panels, three hanging face down and, directly below, three on the floor facing up. They’re red, yellow and blue, of course, with like colors facing like and surfaces so smooth and reflective that, when viewed at an angle, the reflection of adjacent panels creates a partial color spectrum.

The point, reads the press release, is to deal with four-dimensional space and the chill of that impalpable dimension is palpably present in the installation. It distorts light so that fellow viewers on the opposite side of the work seem to hover. Lateral and vertical space seems non-existent and one’s senses begin to swim. It is disorienting and, in my case, slightly sickening. If any human being were, in fact, to experience the fourth dimension first hand, the effects would doubtless be far worse. First, proportion disappears, then scale. You’re suspended, like a point of reference to yourself. You see yourself in the space and the space is in you. The geometry of the spectrum is your own internal geometry and what is outside is the same as what is within. Irwin has forced you to internalize his reality.

Once artists got the notion to create work that did not require the viewer’s willing participation but that might actually physically assert its control over them, all bets were off. A new generation has gone back to painting, but without the spatial intelligence that is now, more or less, the exclusive provenance of a previous generation, the one that decreed objects meaningless. Today’s young painters, Irwin’s rightful heirs, proceed in the void he envisioned. His void is our void-not just a perceptual space, but a metaphorical one representing the plight of artists for whom the tangible world has lost its meaning. Sentimentality is never advisable, doubly so in art. Recent trends point decidedly away from it in virtually every sector, but the question remains: How do we paint our way back into meaning?