Given our penchant for narrative and fictions these days, the enormity of artists’ projects and attempts at world-making seems to grow and grow. The artist is not just re-presenting the world or documenting it, but rather is now one who creates his/her own world and fills it with stories.

Originating at Chelsea Space and traveling to other venues 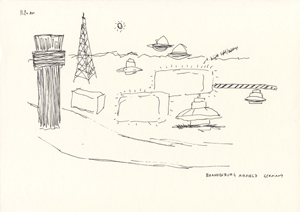 Given that at first glance Hexen 2039 (http://www.hexen2039.net/Hexen2039.html) appears to be a mere drawing show, its subtitle “new military-occult technologies for psychological warfare, a Rosalind Brodsky research programme”, leaves the viewer plenty to ponder. In one “reality” this entire show chronicles the “adventures” of Rosalind Brodsky, the identity created by the painter Suzanne Treister in 1995 and is thus the result of 10 years of “research”.

Her character Brodsky, born in 1970, is an artist/film-maker who teaches in a London art school. However, in her delusional state, she believes that she works at the Institute of Militronics and Advanced Time Interventionality (IMATI), and has been conducting “scientific investigations” into the mind control technology being used by the British military. She is also a time-traveler! Linking Chernobyl with witchcraft and the American film industry with British intelligence and Soviet brainwashing, among others, Brodsky’s drawings attempt to document the odd linkages among these relationships over time. Her time-traveling has enabled her to undergo Freudian analysis, meet Kristeva, Jung and Lacan, and produce a cooking program titled, “Rosalind Brodsky’s Time-Traveling Cookery Show.”

At the entrance, a “documentary film” is playing, and along the ramp into this small gallery is a line of loosely drawn, hastily sketched images that seem to have been made by an artist with a nervous disposition or shaky hand. Termed “remote viewing drawings,” they were purportedly made through Dr. John Dee’s scrying crystal at London’s Science Museum (John Dee being an alchemist and Elisabeth I’s “Queen’s Intelligencier,” as well as a recurring character in Brodsky’s cast). “Scrying” refers to the ancient practice of attempting to see events across time. As in her other works, a cast of recurring characters are portrayed or “seen” in these works.

Centrally hung, and more interesting, are a group of diagrammatic drawings that trace the interrelationships between the various organizations, individuals, and events that Brodsky is investigating. Notations and little portraits are connected by skeins of lines, thus creating maps of relationships and power structures. A diagram on mind control, hypnosis and drugs starts with a thumbnail drawing of Rasputin at the top and ends at the lower right with the MGM logo, the pyramid from the 1994 movie Stargate, and the name “John Dee,” a progression that traverses references from Soviet brainwashing to a US parapsychological “remote viewing program,” also called Stargate.

Treister has also created a more documentary set of images, meticulously drawing from photographs, emblems, patches and even an FBI most wanted poster, depicting top terrorists, the headquarters of British Intelligence (MI6), RKO’s emblem, Nixon meeting Samuel Goldwyn in 1971 and John Dee’s Aztec mirror, among others.

In addition to this show, Treister has undertaken a series of interventions at The British Museum, Goethe Institute, Warburg Institute, Science Museum and Polish Hearth club. Mostly they take the form of drawings that replace portraits or objects; in each case the history of the venue provides a point of investigation or commentary. A drawing of Samuel Goldwyn, the famous Polish-born Hollywood producer, replaces one of an ex-chairman of the Polish Club. Although his name was on the Metro-Goldwyn-Mayer banner, he was not a partner in the corporation, but he plays a key role in Treister’s conspiracies, loosely connecting him to Stargate (an MGM film) and, by association, the US Army’s purportedly real, clairvoyant “remote viewing” project.

Meanwhile at the Warburg Institute, Hexen 2039 The Movie had a special screening. Filmed in a documentary style, it purports to delve into the research from Brodsky’s travels, with local art world luminaries, including dealer Antony Reynolds, portraying various “players” in Brodsky’s delusions. Treister’s work is truly a metafiction!

In her earlier years, she had been a sort of intellectual New Image painter. Even then she traced histories of some sort or other, all of which involved intricate pieces of research. What Rosalind Brodsky embodies, though, is a deep human desire to uncover mysteries and dream up fictional worlds. She also evokes a very common belief that there are forces greater than ourselves, be they spiritual or governmental, at work. Brodsky is an identity that acts as a machine through which Treister generates her art. This project is distinguished by its boisterous, seemingly irrational rigor, but what ultimately holds it together is the strength of Treister’s drawing.

Fischli and Weiss
Flowers and Questions,

a retrospective at Tate Modern

One of the more amusing recent pastimes at Tate Modern has been watching the reactions of viewers strolling through a room containing what looks cleverly like a Fischli and Weiss installation-in-progress. Created out of carved and painted polyurethane, it is conservative and avant-garde, serious and funny, underscoring the duo’s sense of mischief and taste for unmediated reality.

This retrospective presents some of their earliest collaborations, including a pair of films depicting the existential adventures of a rat and a bear (i.e., the artists playing dress-up), right up to recent black cast rubber sculptures of tree trunks and roots. In between, there are sixty cute and hilarious little vignettes created from unfired clay that, along with a famous series of photographs documenting the artists’ sausage sculptures (a car crash, fashion parade, scene from the film Moonraker), could be described as a frivolous approach to art-making. But these works instead seem to operate on the level of the absurd without the ballast of the tragic. It’s a fine line. Peter Fischli and David Weiss seem less concerned with “pondering” reality than they are with “capturing” reality. Their fantasy-colored photographs of airports and flowers, or videos of inanimate objects making pratfalls, or even a cat drinking milk seem, like the artist’s native Switzerland, serene, pretty and relatively unaffected by the turmoil of the outside world. Despite their sophisticated techniques, their art is in possession of a rare humility. It feels not only at a remove from the dark and cynical attitudes of most creative types, but appears to be joyously irony-free, which, in this day and age, seems a rare thing.

Sherman Sam is an artist and writer in London. His paintings can be seen in an exhibition opening this month at The Suburban in Chicago. He also holds the Inspire Fellowship at the Hayward Gallery.