‘how long have I been sleeping?’
Hudson Franklin 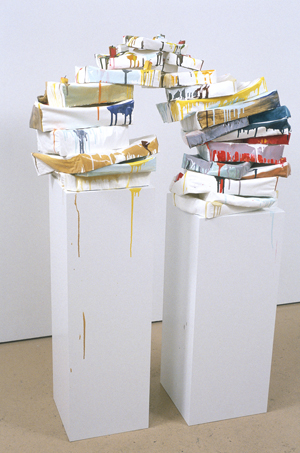 In his 1962 book, The Shape of Time, George Kubler proposes a theory of historical change as a succession of manmade things as opposed to the commonly held view of change based on style or specific biographies. He argues that there are recognizably early and late versions of the same gestures that can be linked by formal relationships rather than discontinuous inventions or styles.

European curiosity cabinets, which contained both natural and manmade objects, are considered precursors to our modern-day museums. Narahashi’s six glass cabinets form part of a series entitled Modern Tomb Furnishings, and contain collections of objects made by the artist that simulate the aura of artifacts. They are installed on somber-colored walls that lend them an air of mock-museology. The objects bring to mind Bronze Age tools, primitive tidal markers, and, in one case, miniature architectural models. As referenced by the title, in ancient cultures such as the Egyptians and the Chinese, belief in the afterlife created a vast industry for objects destined solely for funerary use. Narahashi’s collections could thus be mimicking what would have been produced as part of some immense mortuary deposit, or perhaps be seen as a witty commentary on the number of ‘art objects’ being made today that far exceed the demand. Like memento mori, Narahashi’s curiosity cabinets might, as she says, “be a hedge against a possible future.” Taking this thought further, might she not be suggesting that after passing through several hands, these works too could land in the basement of a museum only to collect dust?

Perhaps in playful response to Kubler’s theory, as you pass from the first part of the gallery to the second, it seems as if Narahashi’s cabinet objects reappear, but in a transformed state. In “Gravity’s Rainbow,” two square white pillars, one slightly shorter than the other, spawn squished stacks of painted paper boxes arching towards the center with a Slinky-like configuration. Extinguished, nearly spent candles sit precariously atop the pile of boxes, lines of melted wax commingling with drips of paint. Like votive offerings to unnamed deities or roadside shrines, this piece and many of the others evoke the sense of unknown tragedy.

In a post 9/11-Iraq War-tsunami-Katrina-world, it is difficult not to view some of this work as a reflection of the fragmented imagery from those disasters. However, the remarkable strength of the works in this show is how fertile they are in their associations and how their sly, gentle wit lifts them out of the harness of the present to conflate notions of an imagined past with a definite sense of future possibilities. What seems even more remarkable is that this is the artist’s first solo show.

The new book collects the illustrated features dedicated to the Museum of Modern Art’s archive and combines them with six freshly commissioned artist’s projects, a foreword by journal editor Tod Lippy, and an introduction by MoMA chief of archives Michelle Elligott. The documents reproduced testify to the erasures, misfires, pivots, and gambles, ingrained in the museum’s history, but kept locked away in its archive.

Resilient Objects: Surviving the Collapse of the Institution

In 2018, on a warm September night in Rio de Janeiro, the exposed electrical wiring of a poorly installed air conditioner short-circuited, starting a fire that destroyed most of the 20 million artifacts and natural specimens stored and displayed at the National Museum of Brazil within a matter of hours.

What a brilliant cacophony of abstract gesture, I think to myself while taking in Ballin’ the Jack, Louise Fishman’s first solo exhibition at Karma Gallery in the East Village. The oil paintings on view in the main gallery revel in their messiness: thick strokes of paint crash into each other, clashing colors fighting for dominance, while the white gesso underneath reveals itself as a seductive promise of transcendence.

Everything Genesis did was dense with layers of intention and association, available to random chance and accumulating coincidence, so that it formed a holograph—one of he/r recurring descriptions of meaningful artifacts.