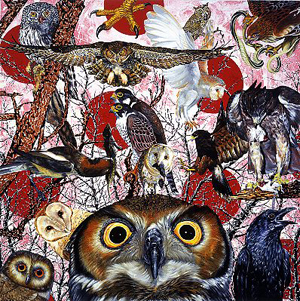 In a conversation with the Chilean artist Catalina Parra in 1986 about the differences between “political art” in the United States and in most of Latin America, she stated that in her country, nothing could be said outright. “In Chile, we have learned how to use the metaphor and to weave everything between the lines.”

Looking at John Newsom’s recent paintings of predatory birds, owls, alligators, worms, bats, snakes, and sweet little chickadees—intermingled with thorns, snapdragons, wilted pansies, gnarled, stick-like vines and lusciously painted tidbits of rodent carrion, I kept hearing Parra’s comment over and over again. Here were paintings that I believed had political content, but there was no statement on the wall to tell me this (and I have a strong aversion to reading gallery press releases ever since the nineties, when American art turned away from radical aesthetics and toward ideology and promotion). But in the case of Newsom, the rhetoric really doesn’t matter. What does matter is the manner in which the imagery within the painting, including the surface and the color, communicates in terms of metaphor and how the artist has woven the politics between the lines.

During an interview with Electronic Arts Intermix in the early eighties, the artist Allan Kaprow was asked about politics in his work. His answer came in the guise of another question: “Do you mean art world politics or real politics?” Well, in Newsom’s case, I think it’s both. A relatively large-scale, Bosch-like painting like “Final Settlement” (2005-06) is layered—initially with a muted reddish background, then splattered with allover white brushwork, and then come the animals, some of which are mutated in one form or another. Formally, Newsom paints inward from all sides—the head of a horned creature reflects (on its horn?) in the lower right corner, a closed tulip drops like dead weight from the top edge, a horrific bat dangles from a branch inserted from the left. Nothing is very moist in the picture. Most everything is dry with the exception of the snapdragons. It is an eerie environment, nearly beyond belief. But is this eeriness simply for effect? I think not. These creatures and plants interact and have style in spite of the grotesquery beneath the surface.

I find it difficult to decide whether the metaphor in another work, entitled “Shadowland” (2005-06), refers to an art opening or a jury’s deliberations over a notorious criminal (the artist?). Here the emphasis is given to an owl’s glaring eyes as they appear in the middle of the painting’s lower edge. In fact, “Shadowland” is filled with owls peering everywhere—from the corners or behind branches—as well as other fierce-looking birds in the process of feasting on their carrion. Again, the pictorial space is layered with reddish paint underneath and circular moons rising up through the expressionist whiteness. This macabre painting is seething with absurd creatures, conflicts in birdland. The canvas displays a shattering disarray of carnage, a veritable exegesis on survival and pathology—all that is necessary to inhabit the dark side of existence.

There is another aspect of Newsom’s metaphorical rave: the veneer of Matissean color in consort with the formalist strategy of allover composition, once used in defense of “action painting” in the fifties, as a structural scaffolding to hold his entourage of spiteful feathery ghouls in place. In doing so, Newsom constructs a painterly detour that distracts us from the environment of terror that fills his blistering mise-en-scene. Even so, I have to say that John Newsom’s paintings are—on some level—pleasing to the eye, if not the mind’s eye. I find this—for lack of a better word—truly subversive.

When Abstract Expressionism ran out of steam in the late fifties and started to look institutionalized, only de Kooning thought of leaping into figuration again. Pollock tried it, but couldn’t sustain it, as we know, from the hesitations—the stops and starts—of his painterly foils after 1952. Maybe, historical time is still a reality in spite of the diversions of the media. Maybe the impact of history is still necessary for an idea to germinate, encompass, and sustain a new form based on the ruins of the past. Whatever the reason, Newsom has done something in the likeness of a heroic style, but with a personal, ironic edge and an errant peculiarity that runs rampant throughout the porous space of those aging gestural surfaces. In doing so, he rips the history of pictorialism asunder. These are abstract effigies long overdue.

Fault Lines, which brings together 12 works by five artists, is the first exhibition in this country dedicated to the remarkable phenomenon of rigorous abstraction among women artists with roots in South Asia.