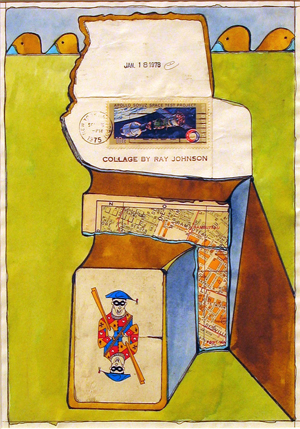 Nearly 40 years after they were painted, John Evans has finally unveiled his mysterious canvases of geometric designs at the Pavel Zoubok Gallery, where they are hung alongside Evans’ colorful paper collages, each medium aesthetically complementing the other.

Precedents for John Evans’ vintage works can be traced to George Braque, Paul Klee and Kurt Schwitters, among others. Their titles—“Swastika Rising #16,” “Justice? For Shame!” and “Payola #19”—express Evans’ disdain for the corruption and police state tactics of the Nixon administration. He takes an early “green” stance toward pollution in “Smogscape” featuring the outline of a coffin; and he renders the crowded streets of “Nueva York” as a cubist-geometrical abstraction.

The playful title of the show, Happy New Year, refers to the show’s opening in early January and to the fact that the collages on display were chosen exclusively from January dates in the artist’s long artistic diary. John Evans has been a collagist since 1964 (a year after receiving his MFA from the Art Institute of Chicago), and for nearly 40 years he has created a collage per day from fragments of the myriad ephemeral items (stamps, labels, photographs and fabrics) found on the streets on that date. The result is a multicultural anthropological document and a visual-art record of Evans’ walks up and down the byways of New York City during the closing decades of the 20th century.

As a collagist, John Evans was influenced by Joseph Cornell, May Wilson and Ray Johnson, using techniques that recall Schwitters and Hoch. Evans often adds India ink, and watercolor, and printmaking elements (like rubber stamps) to his already elaborate artwork, giving the finished piece feeling of a modern-day illuminated manuscript. At the bottom of most pages Evans has painted a pattern of stylized duck heads, tilted as if they were observing their own behavior and either smiling or crying.

The show’s catalogue includes a mail-art piece packaged in an envelope, an introduction by Pavel Zoubok and an essay by Valerie S. Komor, curator of the New York Diary show at the New-York Historical Society, where Evans had his famous mini-retrospective in 2002-2003.

Evans uses the tool of collage and the philosophy of inclusion to express his personal sense of irony, humor and shifting aesthetic and socio-political ideas. Shirt buttons, denim pocket flaps, playing cards, a bus ticket to Montclair N.J., a tattered American flag— found objects mixing the alchemical elements of memory and happenstance. Evans’ collages seek the unknowable as they whimsically record the unraveling of our culture and its fleeting ecstasies.

In this show titled Aspen Drift, there is a surprising absence of blur. Cerith Wyn Evans’s neon sculptures describe form in such exacting terms as to evoke something diagrammatic, like glowing renderings of discrete movements suspended in the air.