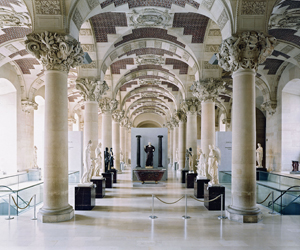 What signals the advent of the Sublime for Kant is awe: dread wonder at the sheer power of beauty or terror in Nature. While this experience exalts the soul, even the moral character of the beholder, it is absorbed in degrees, like the stages of a perilous initiation. Compelled to assume a posture close to worship, the meager mortal shrinks, then quails. Thunder brings us to our knees. Prefiguring the Absolute, as the sky may promise heaven, the vertigo induced by rapt contemplation of a mountain gorge erases us before the profound abyss.

But (for 18th century Enlightenment Europe) Man is the crown of creation. This encounter with grandeur contests him, and he fights back with the force and fury of his God-given majesty. It’s a cinch. The ultimate outcome’s been decided in advance. Un-cowed in the face of nature’s towering might, the mind of man prevails in its puissant glory.

“O mortals, I am as beautiful as a dream in stone.” (Baudelaire). With The Louvre, her new offering at Sonnabend, Candida Hofer wins this mute war in the heights. Nine large C-prints, approximately 200×250 cm, elegantly depict the galleries and classic sculptures of an un-peopled Louvre. Mise en scene and figurines. Their strict repetition is hushed or haunted. Its infinite regression in a hall of mirrors is an echo underwater, an inhabited mirage.

We are told that the ancient Greeks painted their marble statuary. When unearthed, however, Time had bleached it white as bone. Hofer finds even the display cases and stairways of the museum to be suffused with chalk and chocolate, oyster and plum. Its stone tableau vivants from the age of Sallust pose (ec)static chessmen in “a temple whose living pillars sometimes let fall murmurs as we pass.”

Though markedly similar and symmetrical, these straight-on center shots vary at the vanishing points from onyx to cream, while their unexpected emphases, despite the ornate luster and masterworks of painting present in its Gallerie d’Apollon, may be the Louvre’s parquet floor or brickwork vault. There is no way to appraise her art in the current idiotic idioms of Cultural Studies claptrap chic. We see silence. We languish in a forgotten Romance language of luxe et volupté, a grace that is replete, and which peremptorily renders them senseless.

If this sounds more like unabashed encomium than critical review, consider the lamentable declension of beauty in the arts. From vintage Beaux Arts we decanted Fine Arts, diluted then to “Modern” Art—its one word so weak a wine it could not stay modern enough. Now we cry into our empty cup. Our next renaissance will dawn when some sales rep literally coins a name for what’s left after the Post-Modern!

The Platonic veil is lifted. Devotees believe that Art is God, or as close as we’re gonna get. To cite another poet, John Keats on seeing the Elgin Marbles: today it is Candida Hofer’s camera obscura that captures an elusive beauty’s “shadow of magnitude.”

In his engulfing, otherworldly video installation at Tate Britain, O’ Magic Power of Bleakness, Mark Leckey has transformed a cavernous gallery into a freeway underpass—specifically his childhood hangout under the M53 Motorway, which runs through his deindustrialized hometown on the Wirral Peninsula across the River Mersey from Liverpool.

Golthar, Terror of the Deep

Nathan Place is a carbon-based organism who works by day as a video producer and by night as the peculiar cartoonist behind Golthar, Terror of the Deep. He grew up in New York City, but is just as tormented by living here as most people. He publishes a new Golthar every week on Instagram at @GoltharTerrorOfTheDeep.

The Power of Intention: Reinventing the (Prayer) Wheel

The Power of Intention: Reinventing the (Prayer) Wheel brings together contemporary artists making work about intention, belief, and prayer with historical prayer wheels and related images from the history of Himalayan arts.