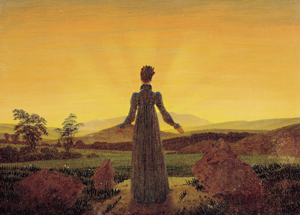 Caspar David Friedrich (1774–1840) is the best-known painter of German Romanticism, which spans the late 1700s through the 1850s. Other significant artists, such as Johann Christian Dahl, Georg Friedrich Kersting, or Philipp Otto Runge, do not even come close. However, due to a chronic illness and a stroke in 1835, Friedrich slowly slid into poverty and obscurity years before his death. It took more than a century for the first museum retrospectives to be mounted in London (Tate Gallery, 1972), Hamburg (Kunsthalle, 1974), and Madrid (Prado, 1992). In the United States, only two solo exhibitions, both held at the Metropolitan Museum in 1991 and 2001, have been dedicated to Friedrich. Most of his works are scattered and can be seen mainly in German, Danish and Russian museums. Therefore, this exhibition at the Hamburger Kunsthalle, the largest in decades, was a rare opportunity that, in its comprehensiveness (despite the exclusion of a few of Friedrich’s most famous works, such as “Monk by the Sea” from 1809–1810 and “Tetschen Altar,” painted in 1807–1808), will not likely recur anytime soon.

Seventy oil paintings from more than fifty museums and private collections, as well as hundreds of drawings, watercolors, sepias and prints were on view, ranging from small studies to major compositions. One of the central points of this exhibition is that Friedrich should be viewed not only as the most important figure of German Romanticism, but also as its inventor. This thesis should be taken with a grain of salt, since it refers to the artist’s invention of a highly symbolic visual vocabulary that is now associated with this period, rather than staking a claim for Friedrich as the sole progenitor of the movement’s development. In fact, German Romanticism was hardly a movement, as it did not involve a unified group of artists and philosophers working from a formulated set of ideas. It was a sentiment, not a style.

Romanticism arose from the malaise dominant in European societies at the end of the 18th century. The French Revolution of 1789 had not only disrupted the status quo and attacked the reign of royalty, but it sent ripples of upheaval throughout Western Europe. The aristocracy and the bourgeoisie assumed new roles, with the middle class sensing new possibilities and liberties. Germany did not exist as a unified country until 1871. Instead it was a patchwork of small kingdoms, aristocratically ruled regions, and independent city-states, split by religion between a Catholic south and Protestant north. The era’s political tensions fueled a form of world-weariness in the arts. Music, philosophy and painting, in reaction to the partisanship dividing royalists and liberalists, Catholics and Protestants, began to look inward as well as to the heavens. A longing for individual expression and a belief in a better afterlife emerged as major consolations.

Friedrich, through a system of original motifs, created a theatrical framework onto which this longing could be projected. Nature was a reflection of the Promised Land, a glimpse of paradise. Friedrich’s sunsets, mountain ranges, and seascapes, though distant, seem to lure us into other spheres. Less dreamy than seductive, they appear as exaggerated versions of the world we know. These powerful landscapes are composed from nature studies carefully assembled through geometric laws of symmetry and balance. In this sense, Friedrich was a visual collagist who completed elaborate drawings of minute details, such as a leaf or a rock, before fusing them into compositions of sweeping grandeur. This explains why, upon close inspection, some works contain similar formations of rocks or trees. These studies from nature established a vocabulary with which Friedrich merged reality with fiction, or, more pertinently, with his vision of the unknown. It was a language that perceived the divine in each element, a microcosmic approach to the spiritual that remained fragmentary even as the parts are linked into a larger whole.

It is tempting to speculate that Friedrich intended his painting to be both a window into an imaginary world and a mirror for each viewer’s longings. In either interpretation, they function as a gateway, allowing us to project ourselves into the serene distance or interiorize the path that lies ahead. By transcending the gap between the viewer’s emotional reality and the painter’s fictions, Friedrich’s work avoids descending into kitsch. Although, on the face of it, a crisp rainbow set against a gray, lowering sky or a deeply saturated sunset might suggest a shallow sentimentalism, a masterful painter with an authentic belief in the potency of these images is able not merely to make them work, but to elevate them to metaphors of a generation’s emotional truth. The significance they held for their historical, spiritual and political moment seems to appeal just as strongly to our own yearnings and fears, attesting to their timeliness in another uncertain age.