Our Yard in the Future: The Art of Gayleen Aiken Sunday January 11–February 4, 2007 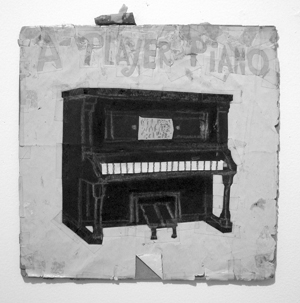 I had already been to a series of openings in Chelsea by the time I arrived at Sunday on the Lower East Side to see the late Vermont artist Gayleen Aiken’s work. At first glance, and from a comfortable distance, I thought it looked a lot like what I had just seen across town on West 25th Street: Densely arranged groupings of naïve-looking genre scenes in high-key color and low-key materials, presumably adding up to some internal narrative that, if not completely ascertainable, would be explained in the press release. It wasn’t long before it was clear I had misinterpreted what I was looking at.

There are scores of pieces in the exhibition curated by Peter Gallo, entitled Our Yard in the Future: The Art of Gayleen Aiken. Most are small and accompanied by handwritten text. Generally, though, they escape consistent visual classification. Rather, the work is best defined by its inimitable inconsistencies; the aberrant details that set Aiken’s exhibition apart from its crosstown counterparts. She worked, for the most part, on improvised or makeshift surfaces: notebook sheets, torn sections of craft or construction paper, canvas board, cloth, and an occasional piece of canvas. Her drawings vacillate between outwardly focused storytelling and inwardly directed diaristic nostalgia, revealing a fondness for nickelodeons, comics, farming, camping, her relatives, and “happy memories” in general. These sentimental treasures are well documented in her personal lettering style and often identified with her own ‘made by’ insignia conspicuously emblazoned directly on the face of the image.

Yellow, disintegrating tabs of tape bite the corners of most of the work. “Player Piano #3” (ND) bears the brutal scarring of a life far less pampered than most flat file quality work, its paper turning a deep goldenrod as acids eat it away. The skies above the many historic Vermont buildings are often covered so densely with cheap, waxy Cray-Pas and colored pencils that pressure tears are visible in the paper. The same is true for the backgrounds of her interiors, as in “I Entertained Crippled Shut Ins,” (ND) in which the intense red of the wall seems as if, in the absence of a high-quality oil stick, she tried to intensify the color by grinding it into the paper through sheer will power.

These erasures, misspellings, and personal reveries are clearly not the product of someone who’s trying to reverse-engineer the concept of the naive. Aiken is the original that so many artists have been trying to deconstruct and replicate on their Arches drawing paper. Her work is built on visual non-sequiturs that—though often attempted—can’t be manufactured synthetically in an MFA program or a TriBeCa studio. Aiken’s are the unedited interests of someone who happened to use paper and crayons the way some of us use conversation partners or bartenders. And whatever anyone says, this is impossible to duplicate.

I voiced these sentiments to the group I was with at Aiken’s opening. A long debate ensued about the nature of authenticity and whether such a thing exists anymore. I deduced from our conversation that there are three kinds of art viewers in the world: the cynical, the relativists, and those of us who believe that there might be people around who have managed to make it through life without regarding their own creativity in the mirror. This has little to do with the commercial art world complex—because the self-reflexive genie is already out of her bottle—but a lot to do with art as a personal practice. In light of this, it is all the more important to preserve an original so that its derivatives don’t become pure simulations. This is Gayleen Aiken’s contribution to art.

It’s been 40 years since Roland Barthes pronounced the author dead. And unfortunately, this has resulted in an era in which creativity has been relativized to the point that we’ve stopped discerning the synthetic from the really, really synthetic. The idea that meaning is fugitive is only true from a macro-perspective and shouldn’t be used to negate the contribution of genuine visual storytellers like Aiken any more than General Relativity should be used in traffic court to contest a speeding ticket. On earth, rate times time equals distance, and, from where I stand in one month in 2007, Gayleen Aiken’s work looks far more inventive, and tells a more compelling story, than anything I’ve seen at an open studio in New York City.