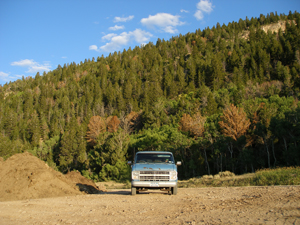 Many questions have more than one answer. Important questions often hang in rhetorical limbo, unsolvable by dint of their gravity. Both scenarios apply to the question posed by artist-activists Ayreen Anastas and Rene Gabri in their new project Camp Campaign: How can a camp like Guantanamo Bay exist in our time? To gather answers, the duo crossed the United States in a van, camping out each night, visiting current or defunct relief, refugee, detention, boot or military camps and meeting with people who have opinions about camps—Gitmo or otherwise. The documents of this trip during the summer of 2006 are now on display in the project room of Art in General in Tribeca.

As you approach Art in General’s building, two hand-painted signs taped over the first-floor windows of the project room announce in English and Chinese, in deference to the vicinity of Chinatown: “Tell the people of America that we are against torture.” Once inside, you have choices. You can view the three-channel video installation consisting of two small monitors and a large wall projection. The projection shows Camp Campaign destinations intercut with texts—including excerpts from writings by Italian philosopher Giorgio Agamben and lists of the names and nationalities of detainees in Bagram and Guantanamo detention camps. Below, the small monitors play two looped videos: one presenting glitzy tourist outposts such as casinos and carnival parks, and the other dominated by a quiet canoe ride on a lake. Stacks of classical vinyl LPs line one wall, and if you like, you can select your own musical accompaniment for the show. You can also watch a slide show projected high on another wall that recounts a loose chronology of the trip.

Or you can review the heavily annotated map of the Camp Campaign laid out on a windowsill. Find out where Anastos and Gabri’s literal journey, as well as their research, led them. The artists headed west from New York to Los Angeles, taking a circuitous route that brought them to, among other places, Camp Perry (a National Guard training camp in Ohio), Detroit, Chicago, the Natchez Trace, New Orleans, Denver, Yellowstone, Missoula, Seattle, Tule Lake (a WWII Japanese internment camp site and major center of resistance), Oakland and San Francisco.

You realize from the artists’ graphics and route index that the United States can be mapped in terms of its military camps, detention centers, internment camps, POW camps and rendition airstrips just as easily as its cities and cultural hotspots. These locations, which connect current and historic places of internment in the United States, are numerous and easily found if one just takes the time to locate them.

The Camp Campaign website (www.campcampaign.info) reveals other keys to the project. A reading list orients you to Anastas and Gabri’s intellectual leanings, and a two-columned overview examines the relationship between the words “camp” and “campaign.” As Art in General curator Sofia Hernandez Chong Cuy says in a radio interview archived at the site, “in this project Anastos and Gabri use the strategies and activities of both camping and campaigning.” Anastos, during the same interview, adds, “it’s a research process, not just a campaign.”

The documents in the project room, however, while helpful in making sense of the trip, are not exhaustive. Taken together, they set up the contours of an argument about, rather than serve as irrefutable evidence of, torture and treason. This is apropos; artists like Trevor Paglan, Naeem Mohaiemen and Jenny Perlin have already provided ingenious representations of some of the covert and barbaric practices of the U.S. government and their aftereffects, carried out in the name of preventing terrorism. Instead, viewers of this exhibition are invited to participate in the artists’ concern for justice and human dignity, but with the constant reminder that no one’s off the hook. One text juxtaposed in the projected video quotes Treblinka commandant Franz Stangl from Gitta Sereny’s Holocaust book, Into that Darkness: “I have never intentionally hurt anyone myself. But I was there.”

The project offers another explanation for how Americans seemingly permit various forms of Guantanamo to have existed throughout its recent history. The United States is vast and filled with distractions, political and otherwise, that splinter us as a nation. The photographs and videos of Anastos and Gabri reveal the America in between major destinations—pictured in both natural and social decline. With this visual thread, Camp Campaign illustrates the enormous geographic and demographic diversity of the United States, which subverts organized action in response to the suspension of domestic and international law in a place like Guantanamo Bay.

Although the project requires a commitment on the part of the viewer to digging in and reading between the lines, since not all of its intentions are evident on the surface, it provides precisely what would benefit any campaign opposing such violations of the law: a well-equipped war room.

Lynn Love, who began her writing and editing career at the media arts monthly, Afterimage, writes about science, the arts and culture as a freelancer in New York City.

Camp: Notes on Fashion can’t seem to make up its mind about what Camp is. The wall text that opens the exhibition puts us on notice: “This exhibition might raise more questions than it answers: ‘Is camp gay?’ ‘Is camp political?’ And, ultimately, ‘What is camp?’”

What makes this book readable, despite the weight of the questions it raises, is Nora’s voice—the consistency of her humor, cleverness, and charm. Though including the perpetrator’s point of view feels at first Lolita-esque, the novel’s overall perspective stays satisfyingly decentralized from his disturbing, first person account.

Shifting and Symmetry of Time

Although my investigations and conceptions of time are certainly self-taught and personal, they are not necessarily outside the canon of human experience or destiny. They’re in fact juxtaposed to the future evolution of technology and human neurological development. This is to say that perhaps one day some of my pictures will awaken from their present hibernation. The question here is whether my calendric calculations and reference points are merely personal or whether they’re connected to a futuristic synergized public.