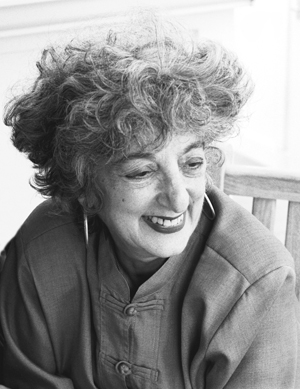 I met Marcia in the late ’80s when I first started writing about art and artists, and in Marcia I found a wonderful friend.

At that time I didn’t understand the breadth of her accomplishments—how famous and infamous she was or why. I frequented the New Museum, of course, but even so I had little idea of what it had taken to bring it into existence and of Marcia’s professional history leading up to it all. But what struck me about Marcia from the first was her utter honesty, lack of pretense, and zaniness. She made it easy for me, so new to the art world, to be myself and to be candid about what I knew and didn’t know, while I reveled in her humanness, her enthusiasm for what she encountered in life, her amazement at the ingenuity and brilliance of artists, and her openness to what might be understood as art. And, even more profound to me, was that under all the optimism she exuded, there was a fundamentally tough political consciousness that experienced all restrictions on individual possibility and on the imagination as barbaric.

It is only now that she is gone and through my many conversations with her husband Dean that I have also learned that she and I were both from Brooklyn. I should have felt it in the initial heimishness of our encounter. I should have recognized it: We both didn’t come from the world we had entered, yet we never forgot the world we had left, or, perhaps, it had never left us.

We discussed many things when we were together, but writing and leadership were at the core. We both loved theory but struggled for our writing to be grounded in real lives and real practice, our own and others. We wanted the language to be accessible but the ideas to be BIG. And it was always fun to talk about the complexity of desiring simplicity. Although we weren’t as yet using Buddhist language, at least not with each other, I see now that we were thinking Buddhist thoughts. And we inevitably talked about issues of gender. Why was it so difficult for institutions to trust women to assume leadership roles? How could one account for women’s aptitude once they did make it to the top? I knew that she worked hard to create an egalitarian, nonhierarchical environment at the New Museum. And I also knew how much resistance one would encounter from men, but also from other women used to certain ways of relating, when one tried to unseat dominant forms of behavior. It was too easy for all of us to want to replicate the comfortable discomfort of inequity we were used to, and it is so difficult to change such dynamics, as if a strange entropy were always pulling us back and in that regression wearing us all out. I think she would have been thrilled to see Nancy Pelosi grab that gavel a few weeks ago.

She liked my essays on these topics, and for this I was more than grateful, especially the ones with titles like “The Institution as Dysfunctional Family” and “Trial By Fire”—my saga of becoming the first woman dean of the School of the Art Institute of Chicago. Being in leadership positions might be in one’s karma, but it was never easy. Marcia understood all this very well. But, of course, with that accomplished will, enormous spirit, and uncompromising integrity, she nonetheless triumphed and built a great institution.

Like all of Marcia’s friends and colleagues, I loved her humor, which I believe came from a real self-assuredness, even when she directed it at herself. You have to be secure at the base to make fun of yourself. You have to know, deep down, that if they throw you out of their world, you always have your own, but your own has to be interesting enough to sustain you. I believe Marcia trusted that the landscape inside her was vast, complex, and exciting. She was therefore able to take big risks, perhaps even daring the world to shut her out, and when it did, she just surveyed her imagination and dreamed another space in which to live. The New Museum was and is one of those locations literally and metaphorically. She could exist without the art world’s affirmation, but she couldn’t live without art, artists, and other creative people.

She loved young student artists. But she also knew how hard it would be for them out there. Her commencement address at the School of the Art Institute in 1994 presented Marcia as Miss Manners offering a 12-step program for “Successfully Avoiding Success,” which included such good advice as “Take pleasure in what you do, because if you don’t, no one else will. Fail early, fail often. Develop a healthy disrespect for authority. Be afraid, acknowledge your fears,” and, my personal favorite, “Be irrational, perfect rationality amounts to perfect repression.” Of course her talk was a hit. But why wouldn’t it be? She and Miss Manners were a lot like their young audience, only wiser.

Marcia knew she had a great eye, and, trusting her own experience of art, she attempted to replicate that experience for others, exhibiting new work not in arrogance nor with ego, but with joy, always wanting to share a discovery of creativity with others, amazed when they responded and when they did not. She had courage, chutzpah, and a deep, deep love for art, artists, her friends, and, most of all, for Dean and her daughter Ruby.

When Ruby chose to attend the School of the Art Institute and came to Chicago, I had many calls from Marcia and Dean, excited for and concerned about their daughter. Marcia was always so proud of Ruby. She admired her daughter’s courage, not unlike her own, to be herself, to take risks, to leave New York for a time so she could find her own way. Ruby is determined, tenacious, at times stubborn, and also, like her mom, often humorous, even hilarious about it all.

I will think of Marcia each time I have to take a leap or when I see something so new, so special, so filled with ideas that I suspect the work and its maker may have a hard time being accepted by the art world and by the world. Seeing was fundamental to Marcia’s orientation—seeing better, more clearly, beyond what we, individually and collectively, have been able to see before. She knew that it was this ability to strip away preconceptions and to experience the world directly—the way artists often do—that would allow us all to reimagine not just what art might be but also what humans and society might be if we were, in Marcia’s sense—the best sense—outrageous, irreverent, and no longer afraid.

CAROL BECKER, raised in Brooklyn, is Dean of Columbia University School of the Arts. Her most recent collection of essays is entitled: Thinking in Place: Art, Action, and Cultural Production.

Marcia Resnick: As It Is or Could Be

Resnick’s portraits of iconic figures such as Sontag, Jean-Michel Basquiat, Kathy Acker, and Gary Indiana, among others, have become well-known documents of a much-romanticized period in the history of New York. Yet few are familiar with the photographer’s multifaceted and wide-ranging practice beyond these portraits, something the curators of this retrospective, Resnick’s first ever, hope to change.

Standing next to any two or three panels, it can be difficult to detect the subtle shifts in shade that the viewer knows are happening along 106 panels between black and white. Yet when we glance down a row of panels, the gradient appears seamless, as the work becomes a perspectival vector through the space. The experience is enveloping, meditative, curious—evoking a slow awareness rarely encountered in the twenty-first century.