The Residents don’t do things like normal people. Normal people wouldn’t, say, form a band in order to remain anonymous, make a 14-hour movie about one-armed midgets, or stage a live show intentionally designed to upset and baffle the audience.

It’s not that they’re trying to be weird—that’s just the way they are.

Yet by simply doing what they do with music, video, and performance, the Residents have become among the most revered and influential avant-garde groups in history. In 2007 they’ll be marking three-and-a-half decades worth of shadows, surrealism, and remarkable, indefinable music. And because they’ve always worn disguises, the Residents have remained ageless, meaning they’ll never have to deal with those “wheelchair” jibes that haunt the Rolling Stones. 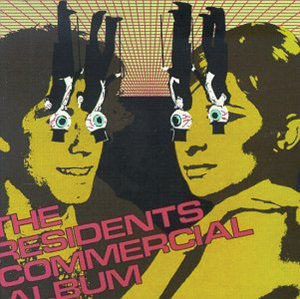 Most performers who’ve stuck it out in the music industry for 35 years are more than ready to take it easy—maybe release another greatest hits album, play a few state fairs, then take a nap. The Residents, though, are observing the occasion with a massive retrospective of their video work at MoMA, the re-release of 1991’s seminal Freak Show in a fancy two-disc set, and three new albums in three radically different styles.

That’s another thing. Of all their releases to date—the Residents discography stretches well over 50 titles—it’s difficult to find two that sound anything alike. From the primitive atmospheres of Eskimo, to the unbearably catchy 60-second ditties of The Residents’ Commercial Album, to the savage operatics of Mark of the Mole, each is unique, yet immediately recognizable. Much of it sounds vaguely like pop music—but pop music reconstructed from fading memory by the inhabitants of some distant planet. As a result, they’ve forged a sound utterly their own: lyrical, unsettling, funny, and jarring.

From the beginning, the Residents have always been looking ahead to their next project—some new album, film, DVD, live show. Not all their projects have been realized, and some experiments have come up short, but they’ve never stopped moving, creating their own reality, surrounding themselves as they go with more myths, more apocrypha.

Of the three new releases, the limited edition Best Left Unspoken, Vol. 1 (Ralph America) is perhaps the most traditional. That is, it’s a collection of rare and unreleased instrumental tracks reaching back over a quarter-century. The contrast between individual pieces can be striking, but the set works as a convenient sampler, illustrating how the group’s sound has evolved.

For the obsessive collector, some of these tracks will be familiar. “Pollex Christi,” for instance, is a limited edition single from 1997. The 20-minute keyboard piece was (we’re told) composed in the ’20s by the Residents’ spiritual mentor, the mysterious N. Senada, and blends bits of Wagner, Orff, and Beethoven with television theme songs. (Understandably, the composition only confused its original audience, as the television shows in question had not yet aired in 1920s Bavaria.) Among the unreleased pieces are snippets from the Mole sessions, an unused theme for Showtime’s Masters of Horror series, and several outtakes from their most recent albums. It’s hardly a complete picture of their output, but for fans it’s invaluable.

The legend of the Residents’ origins goes like this: Back around 1970, the then-unnamed group mailed off a demo of their musical experiments to Warner Brothers. Little information was included with the tape—no band name, no list of performers. A few weeks later, the tape was dutifully returned, addressed simply to “Residents.” The band may not have gotten a contract out of the episode, but they did get a name.

History’s a funny beast, though—not only is it cyclical, but sometimes when it comes around again the forces have shifted a little, you can’t tell what’ll happen. When Warners finally decided to take the leap into digital music via Cordless Recordings last year, they found the Residents—always a step or two ahead—waiting for them, and a contract finally materialized.

Instead of giving Cordless a bunch of three-minute songs to post online, the group created what may well be the world’s first radio drama in podcast form: The River of Crime. Think of it as a post-postmodern Mercury Theater. Like the radio dramas of the 1930s and ’40s, River uses multiple actors, sound effects, and music to tell a story that plays out over five episodes. Unlike those old radio dramas, however, things are a bit more shadowy and cryptic. There’s more cursing, too.

The plot goes something like this: As a young boy in Louisiana, the unnamed narrator became fascinated with the electric chair. As he grew older, that fascination expanded into a generalized obsession with criminal behavior. But as the old cryptozoologist’s dictum warns, if you pursue weirdness long enough, weirdness will start pursuing you. And sure enough, with a mixture of fascination and horror the narrator realizes that crime—real, solid, tangible crime—seems to be spiraling closer and closer to him.

Each episode plays out on several levels. As the narrator tells his story in the present, actors and sound effects recreate the story from years earlier, with a historic incident (the electrocution of Topsy the Elephant, say) providing the thematic base. There’s also a Greek Chorus commenting on the goings-on, and the score, which hearkens back to the dark jazz of film noir.

It’s an awful lot to cram into a 15-minute episode, but it works. Some connections are left for the listener to make, and some things are left intentionally obscure, as has often been the case in the Residents’ work. While the narrative is more straightforward than usual, plenty of bizarre ambiguities still lurk about in the corners.

Complexity aside, it remains an incredibly entertaining and compelling show, alternately funny and sad, creepy and exciting. At times it’s downright disturbing. At every turn, it’s unlike anything I’ve heard before—not in the golden era of radio drama, and certainly not since. But given the source, that shouldn’t be much of a surprise.

The series was originally available exclusively online, but for those of us whose computers are a little iffy, all five episodes are now available in convenient CD form, with an additional disc containing the remarkable musical score.

And then there’s Tweedles (Mute).

The two previous Residents' studio albums, Demons Dance Alone and Animal Lover, marked a stylistic departure for them. The songs on each were smooth, melodic, even “accessible.” But there was something else going on. While the Residents have always explored dark themes in their work, there was an undercurrent of sadness that hadn’t been heard before. It was subtle, but it wormed its way into you after a few listens. Tweedles’ gentle and plaintive opener, “Dreams,” had me thinking it was going to be another melancholy album. But then, very quickly, the sadness shifted to anger.

I don’t mean silly punk rock anger, but rather emotional anger. Tweedles is narrated by a compulsive, manipulative sex addict who moves from lover to lover, draining their affections before cruelly casting them aside. In his world, no one really cares about anyone else, and if they do, they’re stupid. As the album progresses, though, it becomes clear that the contempt he expresses for his conquests is merely an expression of self-hatred. We also learn that he always wanted to be a clown. Exactly what kind of clown is best left for listeners to hear for themselves—but it ain’t Emmett Kelly, that’s for damn sure.

Tweedles is another, very different take on two themes the Residents have been exploring for years—emotional vampirism and the confusion of love with need. In other hands, the result could’ve been merely trite—the makings of an off-Broadway one-man show. The Residents, however, have transformed it into something psychologically complex and smart—with some awfully good lines tossed in. Above all, it’s a very human album—not always comfortable, but deadly honest.

Stylistically, Tweedles represents a logical progression from River of Crime. Again there’s straightforward narration, a Greek chorus, and layers of odd sounds—foreign airports, Hungarian circus performers, dripping water, other voices. The music is rougher around the edges than it’s been in recent years, with instrumentation that includes traditional guitars and electronics—as well as orchestral strings and street musicians. The songs themselves swing between fragility and outright raucousness. While tiny elements may recall earlier releases, as a whole the disc doesn’t resemble anything they’ve done before—and it’s a helluva lot more interesting than anything you’ll hear on the radio, something that could be said for all three new releases.

It’s a pretty astonishing trio of projects (quartet, if you count Freak Show), considering they were all produced by a single group. Thirty-five years along, and the Residents are more productive than ever, working at the top of their game, producing things that are weirder and wiser than ever—which leaves me more convinced then ever that they really are aliens.