Channeling roots music, delta blues, murder-balladry, hillbilly, punk, and polka, Th’ Legendary Shack Shakers are an unreckonable force in rock ‘n’ roll. Since the band’s birth in Nashville they have defied both categorization and the laws of physical stamina. At the bottom of their sound is a primitive beat that rallies to a polka pace. Electrifying the air is the gnashing of a Gretsch and the seizures of a blues harp. And fueling the fire is the hillman yodel and rock ’n’ rock snarl of frontman and Kentucky Colonel J. D. Wilkes.

Currently on nonstop tour across America to promote their new album, Pandelerium, the Shack Shakers are Wilkes on vocals and harp, David Lee on guitar, Mark Robertson on standup bass, and Brett Whitacre on drums. I recently collared Wilkes for a virtual interview and he obliged.

Rail: Your tour schedule is nonstop, and your performances are consistently explosive—how do you maintain the insanity?

CJD: True insanity doesn’t need to be maintained. If it was all schtick, then that would be exhausting and impossible to convincingly recreate night after night. This is natural energy, born of an authentic need for nightly “primal scream therapy.” 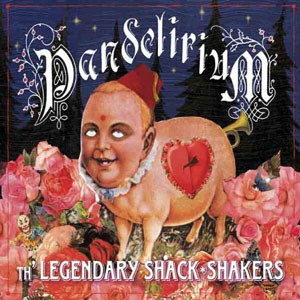 Rail: Onstage you appear to be possessed. When did you and your stage demon first become acquainted? Do you see yourself as a preacher or a prophet of sorts?

CJD: No. I’m no preacher, but I think I have the talent to be one some day. I didn’t discover my knack for public tomfoolery until I joined my high school’s drama team. It was a Christian school with a Christian drama team that performed skits “with a message.”

Rail: Describe the landscape of your personal Southern Gothic.

CJD: It occurs where both the idyllic and decrepit stretches of the deep rural South overlap…where isolation, distrust, and eccentricity mix with faith, hard work, and art. It’s made up of crumbling brick, rusting iron, and tar paper…canvas flaps, clapboards, and coal. Where there are all manner of scarecrows, hoofenaugers, whirligigs, and games with knives. Ghosts trade in war stories while soldiers swap ghost stories. The soundtrack filters through the louvered slats of a pentacostal belfry, and lights upon the blistered ears of a Christ-haunted shanty town that shudders to its touch.

Rail: (Whistles) Can you talk a little bit about your movie project, Seven Signs? What do these signs signify? How do you see the South changing or not changing?

CJD: The movie is a musical documentary about the South, along the lines of Searching for the Wrong-Eyed Jesus. But unlike that movie, we use actual Southern voices to tell and sing the story. The signs are merely markers that I hammer up along the way, placed wherever I believe the Old South still exists in all its marvelous, gothic glory.

It’s also important for the world to know that the people in this movie are just as intelligent as they are eccentric, talented, and electric to watch.

Rail: Your song “Somethin’ in the Water” tells the tale of water contamination from the Union Carbide nuclear weapons plant in Paducah, Kentucky. On a grander scale, what are your concerns with the way modern man is headed?

CJD: I see the world as doomed. Both parties are in cahoots to undermine the working class. The borders aren’t sealed and the [Iraq] war is just a trumped-up Zionist crusade. Big Business gets what it wants, even if it means turning Mayberry into a town of mutants. But I don’t typically write songs to be political. We’re just fiddling while Rome burns around us. Just stay the hell off my property or you’ll get a big surprise.

Rail: You’ve mentioned that the Nashville Scene and other papers don’t give you much press. How do you account for this neglect?

CJD: That’s not entirely fair of me. They voted me “Best Frontman” one year and we’ve made a huge deal out of that. But for a while there it seemed like they had a beef against anything that showed any effort in entertaining folks…opting to write more about these precious, singer-songwhiners and indie rock-hairdo bands than the worldwide successes of the Lower Broadway honky-tonkers.

Rail: Could you share your craziest moment onstage? I was there in Ithaca when Frank the bulldog was humping you throughout the set, but I’m sure that was relatively tame.

CJD: Actually, that was the story I was going to share. [But] there’s always the time in Omaha, Nebraska, where some guy had an epileptic seizure while watching our version of “Ghost Riders in the Sky.” The ambulance came and everything. And as they wheeled him out on the gurney we were still screaming “Yippee-yi-yaaaaay!”

Kind of insensitive, now that I think back on it.

Sarah Ruth Jacobs works as the Assistant Graduate Poetry Coordinator at the New School, and has a background in nonfiction book research and photography (www.sarahruthjacobs.com).

Burnham has been a key player in a wide range of recordings over the decades, starting his career with a loud bang as part of the trio that free jazz/deep blues guitarist James Blood Ulmer assembled to record the landmark Odyssey album in 1983. This record hit the scene hard, blasting through distinctions of genre with a fine disregard for any perceived boundaries.

In 2022, a trio of trios: three albums by three different trios, together as one Blue Note release; Sacred Thread—Lloyd, Julian Lage, Zakir Hussain; Chapel—Lloyd, Bill Frisell, Thomas Morgan; Ocean—Lloyd, Anthony Wilson, Gerald Clayton. The covers of each album are each a print by Lloyd’s wife Dorothy. This is the realm of self-definition.

In The Eternal Now

The weekend of the renewed Ragas Live Festival, Taylor Swift’s new album, Midnights, also dropped. The two are connected because in a fundamental way all music making is connected, but in a much more salient way because the album—and pop music as a whole—and ragas—and related traditions as a whole—are two opposing ways to solve the same problem; how to establish an expressive link to the listener so that they experience what the musician wants them to experience?