Halloween in New York City never fails to deliver a spectacle of immense proportions, with absurdity and oddity running rampant up Sixth Avenue and spilling into all five boroughs. This year, perhaps the strangest sight of all was the crowd milling around outside Lincoln Center. The home of the New York Philharmonic, normally occupied by patrons of the highbrow arts, was besieged on Halloween by attendees of College Music Journal’s twenty-sixth annual festival from all over the world, many dressed for the holiday wearing fake mustaches or rigged-up representations of Snakes on a Plane. 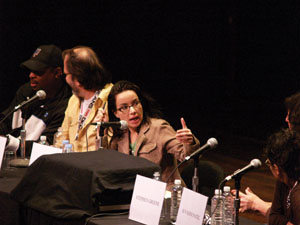 Headquartered at Lincoln Center, CMJ offers a melange of a thousand musical acts of all genres hailing from anywhere between Tokyo and Texas. Thirteen of these bands have the opportunity to play at Lincoln Center during the day, while the others disperse themselves throughout the numerous nocturnal venues of Manhattan and Brooklyn. The radio DJs, bands, journalists, and any spectators willing to pay $495 for a week of CMJ inundate the city, traveling from one venue to the next in the hopes of seeing at least one original band. The intrigue of this year’s festival was sparked by a one-day extension to their typical four-day line up. And what a curiosity it was.

The wood-paneled, gold-lined auditorium that is Avery Fisher Hall has hosted innumerable historic musical performances over the past sixty-four years. Surrounded by this splendor, it is hard not to feel disappointed by random indie bands performing on a makeshift stage on the promenade leading to the auditorium. The Day Stage featured an eclectic mix of mediocre musical acts performing short sets with the aid of a somewhat inept sound mechanic. Live performances like those of Dave Melillo, a singer/songwriter reminiscent of Dashboard Confessional, and Someone Still Loves You Boris Yeltsin, the guitar-driven four-piece, displayed the futility of attempting to redeem rock standards via the inclusion of four-part harmonies. This unconscious attempt at elevating the showcased acts of CMJ heightened the awkward juxtaposition of these indie musicians with their surroundings. In our culturally omnivorous society the distinction between high- and lowbrow art may no longer be clear; CMJ seems to be attempting to further abolish the segregation between the two by degrading Lincoln Center. 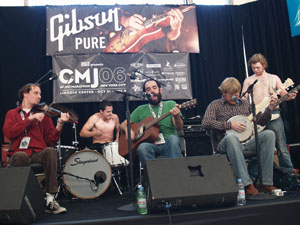 One of the acts explicitly defying the typical presentation of Lincoln Center’s promenade was O’Death. With two members shirtless, and drummer David Rogers-Berry using an empty gasoline canister as part of his drum kit and a tambourine duct taped to his shoe, this Appalachian-inspired act made no qualms about flagrantly desecrating their surroundings to deliver their sound. This was in contrast to the more subtle desecration attempted by bands like Dr. Dog, whose benign performance on the Day Stage appeared to be an impossible attempt at rising up to the standards of his hallowed surroundings. But there are more blatant contradictions in CMJ’s M.O. While trumpeting unsigned bands and having Adam Green sit in on panels for DIY music video–making, the whole festival seems geared towards getting these indie bands signed, or giving tips on crafting their sound to fit the desires of a market. There’s a clear if unstated message that, if they rub elbows with the right people or fit the right aesthetic, some lucky act at the festival just might get approached by a Sony Records rep.

Many struggling independent artists would jump at an opportunity to sign with the major labels represented at panels and scouring the streets of New York during CMJ. However, the festival’s obvious attempts to thrust bands into the limelight seem to contradict its stated purpose: giving audiences the opportunity to see interesting, lesser-known acts. The paradox of subcultures and underground scenes is that their value lies in their very status as underground or marginalized artists; by and large, the CMJ audience craves a product recorded in someone’s basement, not in rushed sessions in expensive studios. As Paul Turpin, owner of Bayside Recording and co-owner of Clickpop Records, pointed out in a panel titled “The Hit Factory at Home,” the recent ownership change of Townhouse Studios, a high-end recording studio in London, points to the larger issue of indie labels chipping away at the major labels’ market share and exposing their precarious financial state. The majors simply find it harder to stay afloat as more artists choose to sign with indie labels.

The contradictions that were glaringly evident in the sunlight refracting off the water fountain in the middle of Lincoln Center became less so as the bands spread out to more appropriate venues at night. Each stage was host to a diverse series of artists: Most were new and emerging acts, like Oh No! Oh My! from Austin, who started touring in August; some were older, like the Slits (at the Knitting Factory) and the Fall (at Hiro Ballroom), both of which were formed in the 1970s. For venue owners, CMJ comes as a welcome guest. Andy Boder, owner of Cake Shop, described the experience as being like Christmas, considering the shows come with a built-in audience. Having lineups determined by CMJ agendas relieves club owners of the responsibility to deliver quality bands, allowing them a carefree attitude towards acts like closet jam-band the Swedish Maison Blanche, whose best live song was a cover of another band in the showcase, White Rabbit.

If we consider Susan Sontag’s distinction between high and low art forms as the difference between unique objects and mass-produced, it is possible to give most of the sub-par bands more credit for their efforts. Importing these acts from all over the world in one five-day burst into New York City’s venues makes them feel mass-produced. It offers the opportunity to realize the manufactured tastes that prevail in music these days, and this manages to devalue each individual band. Perhaps a good method for weeding out those bands that are following trends, it still makes the majority of these underwhelming groups culturally suspect by being part of a festival that melds unique and separate artists indiscriminately to create an atmosphere that lacks any cohesion and yet proclaims a certain ethos.

The nominal mission of College Music Journal is to give underrepresented, independent artists media visibility. Begun by Robert Haber twenty-six years ago, the publication started out by printing playlists of college disc jockeys and featuring artists that could only afford to put out EPs or singles. It has been a force behind giving now-established acts such as Modest Mouse, the Yeah Yeah Yeahs, and Foo Fighters some well-deserved recognition before their songs were topping charts. But as the years have gone by it has become increasingly difficult to discern whether CMJ as a festival is embracing independent, DIY artists or encouraging those same acts to get signed with major labels.

This year, the panel focused on the recent closure and outsourcing of CBGB made the festival’s mains issue tangible. “The Ultimate Reunion,” as the star-studded talk was titled, featured Legs McNeil as the moderator and guests Chris Stein (guitarist and co-founder of Blondie), Tommy Ramone (original drummer for the Ramones), Hilly Kristal (founder/owner of CBGB), Daryl Jennifer (bassist of Bad Brains), Pat DiNizio (lead singer of the Smithereens), and Mickey Leigh (brother of Joey Ramone). Stein took the opportunity to prod the youngsters in the audience to show some initiative, along with Legs McNeil, who described the closing of CBGB as a passing of a baton for the younger generation “to do something with the city, because we can’t afford to.” Hilly dismissed the decline of the club’s performances in recent years in saying, “some of the acts weren’t so good, but if [their music] was unique, they could play CBGB’s.” These comments evoked the feeling that kids no longer have a “shit hole,” in the words of Patti Smith, to congregate in. Instead, they flock to Lincoln Center for CMJ, where, evidently, you don’t need to be unique to get on the bill.

CMJ as a publication seems to fall into the trap that Amy Phillips (senior news editor of Pitchfork Media), Matthew Perpetua (founder of Fluxblog.org), and Maura Johnston (assistant editor of Idolator.com) described in a panel on the clout of bloggers—the unwillingness on the part of print journalists to say that a band sucks. If CMJ were willing to write something truly critical of artists, this year’s festival would not have been so bloated with barely tolerable performances that it added an extra day for. A less hectic schedule would have made it possible to actually see the decent, hard-working bands that deserve the attention of what an ideal CMJ showcase could be.

Chelsea Werner is a writer living in Manhattan.

The Belgrade Jazz Festival has a history of battling adversity. Despite a substantial run from its founding in 1971 until 1990, the festival was understandably dormant during the Yugoslavian Civil War.

Born in the summer of 1937 to a family of migrant Mexican laborers in the Texas town of San Benito (“birthplace of Conjunto”), at 10 he is earning $3 a day picking cotton in Arkansas where he discovers rhythm and blues.