Ekavi Valleras of Astoria, Queens bursts into exasperated laughter. She’s recounting the untold machinations of her youth and the adult frustrations of the biannual kalanda carol rounds where she was raised—Astoria and Athens, Greece. “On Christmas Eve morning and New Year’s Eve morning—and I mean six o’clock in the morning—they are leaning on the doorbell. Na ta poúme! Na ta poúme! (May we sing!)” Valleras compares kalanda to the American Halloween tradition of trick-or-treating: The carolers “know to start early, because by eleven no one can stand to hear the song one more time, and everyone’s out of cash. When you’re a kid, you scheme to hit the expensive stores and houses first.” 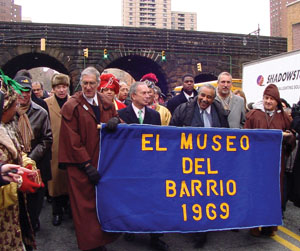 Valleras, program coordinator of the Greek Cultural Center on Hoyt Avenue South, notes that kalanda are just one of many winter holiday traditions kept by Greeks in Astoria. “It really feels like a neighborhood here. It’s about trying to keep traditions alive, keeping kids within the community, close to the language and the religion—so it’s not lost.”

Every year New York’s storefronts, brownstone windows, and front stoops erupt into color as each of the city’s cultural microcosms celebrates its own winter holiday. But as Valleras points out, evolution is inevitable in such close quarters. In parts of Greece, the kalanda are still sung every morning from December 24 to January 7, as they once were in Astoria. Sweets used to be given out to children, but as fewer housewives had time to bake the intricate, honey-soaked diples, kourabiedes, and melomakarona pastries, cash became the accepted custom. It’s also now the norm to share some celebrations with local Korean families in Queens, many of whom participate in the late autumn festival at the St. Nicholas Greek Orthodox Church. 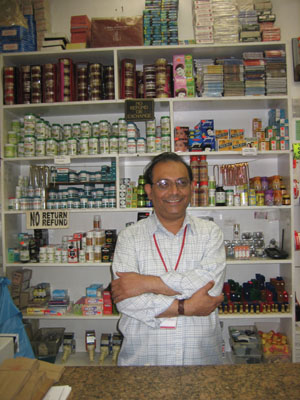 Conversely, Nancy Rizzuto, a critical care nurse from Dyker Heights, Brooklyn, regards her neighborhood’s notorious Italian-American “Dyker Lights” tradition as fairly undiluted. Rizzuto, whose husband Richard sets up a display of life-size Dickens-themed figurines on their front lawn each year, does allow, however, that an Irish-Italian couple started her neighborhood caroling group 30 years ago.

Behind many of the wildly spirited Dyker Lights displays is Lou Nasti, an Italian-American artist proclaimed to be a mechanical genius by Life Magazine when he was just 12 years old. Nasti, who was recently featured in David Katz’s documentary The Kings of Christmas at the Tribeca Film Festival, laughs about the intensity of the competition that develops between neighbors over the years. “They’re big boys with big toys. They always ask what the guy next door bought this year or what he spent, but I never tell. It’s private.”

Thousands flock to the Dyker Lights, and many of the display owners raise as much as $80,000 each for various charities. The appeal seems to know no cultural bounds. “You’ve got 200 amps of animation, lights, music. You can’t not think you’re dreaming,” says Nasti. Working out of his East Flatbush, Brooklyn factory, he perpetuates the ancient Italian traditions of elaborate presepi (manger scenes) and abbondanza (abundance). But Nasti warns, “We have to stay as far from religion as possible. It’s about holiday fantasy now.” 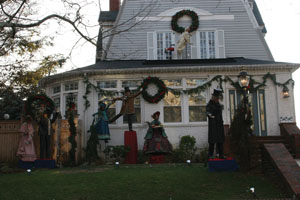 Holly Wolf has experienced a similar tension between religion and holiday tradition. Wolf, a teacher and writer who has lived in the East Village for 30 years, acts as the coordinator of the Downtown Kehillah, a consortium of synagogues. “For a period of time, as a more secular Jew, I decided that a Christmas tree was a symbol of the New York holiday. I saw it as a secular experience,” she says. Wolf remembers her Christmas tree practice ending when she spent a holiday season in Northampton, Massachusetts: “I felt a tree would be a betrayal of my community—it was a community where anti-Semitism was more palpable and the Jewish community more vulnerable.” Returning to New York, “my sense of Jewishness was more developed and a Christmas tree was no longer of interest.”

At the annual Three Kings Day parade in Spanish Harlem, faith and festivities seem to blend without strain. The parade evolved from El Museo del Barrio’s mission to keep Latin traditions alive for the next generation. The museum’s Lauren Van Natten explains that in Spain, Latin America, and much of the Caribbean, gifts are typically given on Epiphany instead of Christmas to symbolize the three kings’ gifts to Jesus. Van Natten says children turn out in droves each year to witness the parade’s giant puppets and bright costumes, or to join the march themselves. The parade ends with aguinalgos carols and a feast of lightly sweetened Rosca de Reyes bread. “It’s a way to keep customs from fading out, but it’s also about cultures coming together,” Van Natten says. “You start to recognize regulars who show up year after year.”

One such regular is Dennis Halaby, co-owner of the Damascus Bread and Pastry Shop in Brooklyn Heights. Halaby, who bakes authentic Middle Eastern pastries in a brick-lined oven imported from Lebanon, attends the Three Kings Day parade each year in Spanish Harlem, but on Christmas Eve he stays closer to his home above the Atlantic Avenue store, where he was born. Halaby’s family and friends gather at Our Lady of Lebanon Church on Remsen Street, where, after Mass, the congregation feasts on whole roasted lamb stuffed with pomegranate, raisins, pistachios, and walnuts.

Damascus caters to the local Muslim community, and Halaby says his store gets so packed around Eid al-Fitr and Eid al-Adha that it’s hard to move. Eid al-Adha, the Muslim Festival of the Sacrifice, marks the end of the annual pilgrimage and celebrates Ibrahim’s willingness to sacrifice his son Ishmael to Allah, from which he won an 11th-hour reprieve. Muslims traditionally pay visits to friends and family on this day, exchanging sweets and gifts and receiving blessings from their elders.

It can be an effort to feel one has properly marked the holiday, according to Ijaz Mughal, a car service driver living in Sunnyside, Queens, who emigrated from Islamabad, Pakistan a decade ago. Each year, Mughal teams up with family members and friends to send money back to his country for Eid al-Adha. It’s illegal to keep the Muslim custom of sacrificing a cow, goat, or sheep in New York City, so an animal is purchased in Pakistan, and Mughal pays a local there to perform the ritual in his family’s name.

Eid al-Fitr, or the Feast of the Breaking of the Fast, which comes at the end of Ramadan, coincides with the month-long Hindu festival Diwali. Singh Manjit, owner of the Jackson Diner in Jackson Heights, Queens, says that both factions of the neighborhood—Muslim and Hindu—tend to join in the revels when the holidays overlap, since there are so many similarities between the festivals. Hindus also visit others’ homes, eat sweets, give each other new clothing, and receive blessings from their elders.

Anil Komar, who also lives in Jackson Heights and works at the Butala Emporium, says that Garba dances, which are organized throughout the neighborhood during Diwali, have grown in popularity beyond the Hindu faith. This year Komar saw many Muslims at the dances, singing and playing instruments in the traditional “rounds” or orchestras which back in India can grow to more than 1000 people playing at the same time. “When you hear that Garba music, you dance no matter who you are,” smiles Komar. “No matter where you’re from.”

Though Diwali and Eid al-Fitr involve the seeking of blessings from elders in the community, during the Chinese New Year it is the youngest in the family who bestow providence. Just as Greek kalanda singers can bring great luck, so can children on the morning of Chinese New Year, by wishing their parents fortune and health, according to Una Yu, a risk analyst originally from Hong Kong who lives in Forest Hills, Queens. Yu still takes part in the annual two-day house-cleaning frenzy leading up to Chinese New Year (“to brush away unlucky things from the previous year”), and her family feasts on traditional pig’s tongue and feet and the symbolic Fat Choi Ho See, made with reconstituted dried seaweed and dried oysters.

Yu’s enjoyment of the festive Lion Dance drums or her careful selection of a peach blossom branch can’t help but summon the Three King’s Day aguinalgos or the Rizzuto’s choice of a Christmas tree. Perhaps Komar says it best as he remembers the Diwali celebrations of Gujarat from his Jackson Heights home. Musing about the universal propensity for holiday celebrations, Komar says: “People really are all the same.”