Flanked by a handful of former Riker’s Island inmates, John Cannizzo gleefully surveys a tangled mass of stems, branches, and leaves protruding from the back of an overloaded truck outside the Martin Luther King Jr. Housing Project in Harlem. “Just look at this one, a real beauty,” he says, caressing a sickly-looking three-foot shrub. “It even has a bud for next spring.” 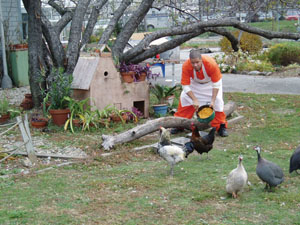 The haphazard assemblage of withered lilacs, spruces, magnolias, even a crab-apple tree—all donations from an upscale nursery in the Hamptons—is not inspiring in the traditional sense. At other points in their lives, Cannizzo’s companions would probably have sneered at his enthusiasm. No longer. When he points out the tiny nub where, with adequate protection through the impending winter, a flower will someday emerge, the group leans in with genuine curiosity, even wonder. They take him seriously.

As director of the GreenTeam, a program that provides ex-offenders, mental patients, and disadvantaged individuals with hands-on vocational training in gardening and landscaping, making plants seem relevant is a big part of Cannizzo’s job—a job that has never been more important; more than 600,000 people leave America’s jails and prisons every year, many without marketable skills or job experience. Within three years, nearly 68 percent of them are back behind bars.

Instilling a real passion for legitimate trades in members of this troubled population is one way to counter that overwhelming trend. It’s an approach that, for participants in the GreenTeam and its jail-based sister program the Greenhouse, appears to be working. “For a small organization, what John and the rest of them are doing impacts a huge number of lives,” says Howard Hemmings, director of gardens for the New York City Housing Authority.

On Riker’s Island, going to the Greenhouse is an attractive option, even for inmates with little interest in horticulture. It’s a chance to work outside on a two-acre oasis of peace and comparative beauty for up to seven hours a day, supervised by specially-assigned guards (“like den-mothers, really,” says Greenhouse Director James Jiler), and, occasionally, to get fresh food (“nobody’s supposed to talk about that, but word gets out pretty fast,” says Jiler).

For many, however, this utilitarian arrangement blossoms into something much more significant. “These are people that have never been given any level of responsibility,” Jiler says. “No one has ever asked them for anything. And most of them have only experienced failure in life in terms of child rearing, failing out of school, their inability to hold a job, and their inability to stay out of jail. It’s just failure after failure. Now all of sudden, they’re in there and their seeds are starting to grow.”

“People come up to us all the time when we’re working outside and say, ‘Oh, thank you for making this beautiful garden,’ or, ‘Thank you for transforming this ugly area into something really beautiful,’” says Jiler. “For the [inmates and interns], that power of transformation is extremely potent; no one is going to thank me for unloading a truck, or for entering a computer program, or for putting away the garbage. But they thank the gardener.”

After staring for a few silent moments at the truck’s living cargo, Cannizzo breaks up the group’s reverie. “Can we talk about what we have to do now?” he asks. “First of all, let’s get these things off the truck.” It’s as authoritative as he is likely to get. When a young man in baggy jeans and a basketball jersey walks up to him around 10:00 a.m.—over an hour late, offering an excuse for skipping work the day before—Cannizzo sighs, looks at the ground, nods. “It’s ok,” he says. “I figured you had a perfectly good reason.”

During his early days with the GreenTeam, Cannizzo tried to play the disciplinarian. The role didn’t suit him. “I just wasn’t good at it,” he says. “Now I’m much more laid back. It works better. It’s easier on the interns, and easier on me.” But it’s a delicate balance. Cannizzo is well aware of the realities of entry-level positions, especially in industries like landscaping where people are “basically hired for their ability to obey.” Reliability, punctuality, respect: these are as important to an employer as any specific horticultural skills. “I don’t think I’m very good at enforcing that part of it,” he says.

Growing up in Howard Beach, helping out with his father’s carpentry business, Cannizzo never pictured himself someday becoming an authority figure. He was more interested in art. After high school he attended the School of Visual Arts in Manhattan, graduating in 1979. He soon landed a freelance job at Doubleday illustrating classic novels. “It was a great,” he says. “I used to have all my friends dress up like characters from, say, ‘Moby Dick,’ and then draw them.” But eventually he tired of the work and, in 1992, joined the Peace Corps. After two years in Kenya, he returned to New York with a fiancé and a disinterest in the convention-driven world of commercial art. He taught English as a Second Language at Bushwick High School for several years before hearing about the GreenTeam position through his wife, who was working at the Horticultural Society of New York.

Hank Ferone, who has been in the program since his release from Riker’s three months ago, credits Cannizzo’s empathetic management style with his ability to reach (and retain) interns. “If you make a mistake, he tells you ‘Good, I’m glad you made that mistake, here’s how you avoid it,’” Ferone says. “You can’t yell at people, because they’ll close up.”

Ferone is a compact man, about five feet tall, with short black hair, two faux-diamond studs in his right ear and a frenetic good nature. Standing next to Cannizzo—a foot taller, unshaven and with unkempt grey hair hidden under a filthy felt fedora—he looks like an ardent high-school halfback awaiting his coach’s orders.

“We’re both Italian,” Ferone says. “So we get along really well.”

There is, of course, much more to it: after a seemingly endless series of personal disasters, Ferone believes his life is finally coming together, and he attributes that transformation to Cannizzo and the GreenTeam. “You have to remember, I’ve been through so many jails and institutions,” he says. “I was a really messed up drug addict. But this has changed my life. I don’t know about anybody else, but I know that for me, this is working. Staying clean has to come first. This helps me stay clean.”

After unloading, the interns look to Cannizzo for further instruction. Opposed on all sides by looming project towers, the rows of decorative plants look a bit hopeless. Cannizzo explains that the barren plot behind them, encircled by cyclone fence, will be their winter nursery.

“Just the warmth of being in that bed gets them through,” he says. “It’s like, if they know that somebody cares about them, that’s enough, they can make it.”

Cleve Wiese is pursuing a Master’s degree in journalism at NYU and lives in Williamsburg.