For a 30-year-old New York firefighter, Dave Herman is a throwback to a different time when neighbors knew each others’ names, perhaps even borrowed cups of sugar for their baking. As he presides over the City Reliquary—the two-room museum he founded in Brooklyn—he seems to evoke a world in which, if he had his way, Hook & Ladder Company 104 would mostly rescue cats from trees. In fact, on a recent nippy Sunday, under Herman’s benign gaze, a young visitor to the museum had the fire department turn out to jimmy open the lock on his bike. “Hey Dave,” the guys called from their truck. 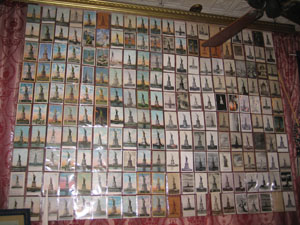 Wall of Lady Liberty postcards. Courtesy of the Vidya Padmanabhan.

The City Reliquary is a ragtag assortment of items touched—if even minutely—by momentous events, and sheer junk that meant something to someone at some time. It sits among nondescript bodegas, takeout joints, vintage clothing stores and tattoo parlors on Metropolitan Avenue in Williamsburg. A quick tour yields several nuggets: a bunch of bristles from a Department of Sanitation broom (“Real!”); a banged-up, rusted shovel picked up from near the New Croton Aqueduct, marked “Very old shovel”; a sandwich pick from the 2nd Avenue Deli; and, in a display window, a set of 35 thermos flasks—the featured collection for October, courtesy of neighborhood resident Fionnuala Ross. The other window displays Reliquary souvenirs—back-scratchers, dogs playing drums, and a T-shirt that proclaims the museum’s credo: “You will do foolish things, but do them with enthusiasm.”

On the weekend of the Open House New York architectural tour, Herman and his colleague, Nik Sokol, were handling more than double their usual number of visitors. Between fielding questions in his earnest, almost courtly manner, Herman rang up sales on souvenirs and occasionally glanced at the TV that was showing old films of Coney Island amusements. 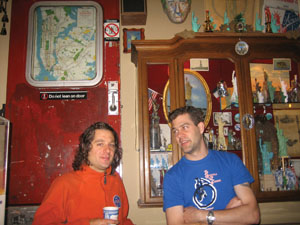 Dave Herman, on right, with VP of Collections, Bill Scanga. Photos courtesy of the Vidya Padmanabhan.

The museum is an effort to bridge the gap between the new Williamsburg and the old, he said during a lull. Herman is a lean man, with serious puppy-dog eyes. When he smiles, he puts everything into it, which seems to be a defining characteristic. “There was so much change in the neighborhood. Old landmarks in the community were disappearing, and there were condos coming up. I didn’t want to be part of the influx that took over and didn’t preserve the character that was here.”

Herman and company envisioned the museum as “a water-cooler for the neighborhood,” as the museum website puts it. They organize block parties, collectors’ nights, bike rides, and writing contests. They invite neighborhood residents to show their collections. And slowly, the neighborhood has responded.

“Building owners and old men with straw hats would come in and give us checks for celebrating the history of the area,” Sokol said. You can’t force the liaison between the old and the new, he admitted. But gradual effort—“having a potluck to get to know your neighbors, offering a dog biscuit [to a neighbor’s dog], playing marbles with the neighborhood kids”—eventually paid off. There was no detectable trace of self-consciousness in Sokol’s voice as he said this. For the people at City Reliquary, it’s Norman Rockwell or bust. 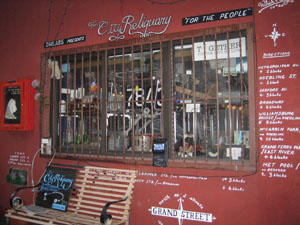 The front window where the City Reliquary got its start. Courtesy of the Vidya Padmanabhan.

“It all started with people asking me for directions,” Herman said. The Orlando native had moved into an apartment at the corner of Grand and Havemeyer Streets in 2000 after art school at the University of Florida. Having directed several lost visitors to the nearest subway station, one day he painted the directions on the wall outside his apartment, where his neat cursive and elegant arrows still remain.

“Then I put out benches and flowers and stuff,” he said. The bench is still there, worn from several seasons outdoors, but still welcoming. The flowers thrive in their bed in a peeling claw-foot bathtub dubbed The Fiorello “Little Flower” LaGuardia Memorial Garden. And the “stuff” fills the apartment window, with a button for an audio tour.

Press the button, and Herman’s voice directs your attention first to the treasures collected from the shores of the Dead Horse Bay—part of Jamaica Bay, named after the horse-rendering factories that operated on nearby land. They include a set of dentures, a classic Coke bottle, a 1954 calendar and a random bottle of pills. The Subway collection features a sign for train number 7843 from the now defunct Redbird series, mythologized among Subway enthusiasts. There are also subway tokens, from the earliest, issued July 25, 1953, to the last, which was retired April 13, 2003. More ephemera—a wooden ruler issued by the NYC Board of Ed, a fire hydrant wrench, a bottle of Liberty Island Soil—offer tantalizing glimpses of untold stories.

The walk-in reliquary around the corner was opened in April to make more room for the collectors’ diverse obsessions. The soil and bedrock samples lodged there—Manhattan schist, Staten Island serpentine, Yonkers gneiss—are mostly courtesy of Sokol, a geologist who does tunneling work with a consulting firm. Another friend, who works on building restoration, brought in pieces of historic structures that his firm had been asked to restore—a cornice from the Carlyle Hotel, a Hearst Building baluster. One true connoisseur saw Herman’s fledgling Statue of Liberty collection and contributed an immense collection of old Statue of Liberty postcards that he picked up at a swap meet, hoping the museum could reimburse him later.

The postcards demonstrate what the museum does best: celebrate the commonplace. “Dear Aunt Minnie,” says one, postmarked March 3, 1935. “Some fun. The boat ride was swell, but the statue too tall.”

Not everyone who contributes to the Reliquary is as mindful of historical significance. More often than not, it’s a quirk that drives a collection. In the past, the Reliquary has exhibited collections of ET figurines, solo drumsticks, flea market findings from Ohio and western Virginia, PEZ dispensers, Mr. T memorabilia, and a mosaic of 2,000 pennies sorted by degree of tarnish.

For Nik Sokol, the bug may be in his genes. His father recently passed on to him a brass ring he picked up at the Coney Island carousel in 1964. These days, Sokol has taken to walking with his head down, to see if he can make other finds as magical as the broom bristles, which he found in a gutter.

At the City Reliquary, “trash” is a bad word. As Dave Herman said, pointing out the 2nd Avenue Deli sandwich pick that he retained after consuming the sandwich (never imagining that the deli would go out of business): “New is the old of the future.”

Vidya Padmanabhan is a writer who lives in Newark.

Chitra Ganesh: A City Will Share Her Secrets If You Know How to Ask