Sean Connery was cool and sadistic. Roger Moore was a smirking impotent alcoholic in a hairpiece. Moore’s casting function was to reassure the producers—who were in Moore’s demographic—that smirking impotent alcoholics in hairpieces could still get laid. His cultural function was to convince First World audiences that old white men could still kick the ass of uppity colonials. Moore never seemed to take on a European: Indians, Africans and darker-skinned South Americans were his preferred targets. 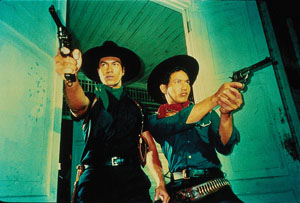 Lonesome Cowboys from Tears of the Black Tiger

After the dead space filled by the robotic Timothy Dalton, Pierce Brosnan marked Bond’s return to a pre-middle age schmoove and to actual competence in the world. Brosnan could shoot a gun, drive a car, wear clothes and, unlike Roger Moore, it was not inconceivable that someone might actually want to fuck him. But Brosnan’s quote charm close quote pulled a heavy load of ironic self-comment. He radiated a 90’s post-modern ‘look at me playing Bond’ vibe. That damaged the franchise in a subtle way, by suggesting that we were all in on a joke, a piquant nostalgia groping for cred. A little ironic distance is fine, but smarmy self-regard is deeply unsatisfying. Bond may be an anachronism, but you don’t have to remind me all the time. I don’t want commentary, I want to escape.

Now Bond’s sincere once more. Daniel Craig is cool and thuggy. He suggests a Connery-sadism: he likes to hurt people. But any connection to Craig as a hero—and the film’s utility as escape—gets wrecked at the outset. Throwing back to the Moore era, Craig chases a black man, an African, through an African construction site filled with Africans. Craig chase the guy relentlessly; the chase scatters damage and African lives indiscriminately. Bodies fly from scaffolding, bulldozers smash buildings, construction workers minding their own business get blown to smithereens, just so one hyper-determined European can nab an African fugitive. The message is clear: when white folks have policy goals, the Third World will just have to bear the consequences.

Franchise-institutionalized racism aside, how dumb can you get? Why wipe out any sympathy for your protagonist from the entire urban market and half the world’s audience? At the close of the sequence, Bond shoots the unarmed black man dead and blows up an African embassy. The disheartening underlying message and the disheartening text (racist chase scenes with no visible plot point) start things off so wrong. How does that sequence, with so many black bodies scattered about, play at any Magic Johnson multi-plex? How is any non-white audience supposed to root for Bond after that?

2001’s thriller Training Day found a solution to this problem that was nothing short of racial/showbiz political genius. Denzel Washington’s a bad guy; he has to go down. The likely candidate to do him is good cop Ethan Hawke. Now, in Hollywood power-karma, no way is Denzel going to allow himself to be offed on-screen by a lightweight like Hawke. And Hawke has a parallel dilemma—he doesn’t want to be branded to African-American audiences as the white boy who killed Denzel. Yet, as the film built to its climax, there seemed nobody else for the job. The meta-suspense of this issue was far more gripping than the text-suspense of the plot.

The solution? The good old reliable Russian Mafia. While technically white, Russian Gangsters 1) wear black balaclavas so their literal racial identity is never confirmed; 2) have no stake in America’s cultural race-wars and are thus more like evil space-aliens 3) are regarded as such super bad-asses that being killed by them brings Denzel no loss of cred.

Why couldn’t the Bond folks have followed Training Day’s fine example and availed themselves of Russian Gangsters, Serbian Flesh-Peddlers or Rogue IRA killers?

Another curiously misguided motif is the animated opening credits (and, by the way, it’s axiomatic: any film with animated opening credits is not worth seeing. Walk out as soon as they begin to roll.) As whatever lugubrious incomprehensible song played (who would have believed that we’d look back on Live and Let Die as a high-water mark?) the animation always featured hot sort of naked girls in profile. Now it’s shadow-figure guys kung-fuing. Why? We’ll see plenty of kung-fu in the movie. During the credits, we want nipples.

Bond girls were, in the old days, modeled on Vegas show-girls: illiterate, big glittery horsy eyes, garish features (aquiline noses like Pinocchio, giant or prominent tits, rounded asses with gravity systems of their own) and the inability to speak an English sentence as a human being might. They were like ponies on a rotating stand—pinups that moved. The Brosnan era brought a classier level of jiggle interest: woman who could walk & talk simultaneously (while, like Brosnan, somehow commenting on their role as a Bond Girl). Casino returns dishearteningly to girls so plastic and lame that the audience laughed when the first one showed up in a bikini on a horse, desperately thrusting her pelvis while hanging on for dear life. Casting Eva Green as the romantic lead only underscores the problem. The only emotion she communicates is a narcissism so uncut there’s no problem believing she’s French.

It all plays so tired and pointless. The Bourne franchise demonstrates that spy-thrillers can be smart and even authentic in their human relations. Bond is an icon and human—tough duty for any screenwriter. It ain’t necessary to put him in Chekhov. But even Bond can’t come alive if he’s buried in every dead cliché from the past.

Leone-Sirk-O-Rama (In Thai)
Tears of the Black Tiger

Seeing films from a culture I know nothing about brings an enlightening freedom from meaning. There are moments in Black Tiger that seem screamingly camp, but for all I know of Thai filmic/cultural conventions, they might be butcher than Steven Seagal. Originally released in 2000, and now distributed domestically by Magnolia Films, Tiger harkens to the recent screening at the Japan Society of Sailor Suit and Machine Gun (covered in last month’s Rail). It’s so weird, deranged and sincere that it makes a mockery of films that strive for strangeness (like, say, Takashi Miike’s later work or anything made by David Lynch in the last twenty years).

I’d like to give you a plot summary, but I have no idea what actually happened. There’s a guy named Dum who’s both the fastest gun in the jungle (and dresses like Lash Larue) and a Rock Hudson-like heartthrob who can’t have the rich girl he loves. Or, maybe he does get her in one plot and gets killed before he can in another. Dum has a worst enemy/best friend who’s the second fastest gun in the jungle (and dresses like Tom Mix). It’s difficult to tell from one scene to the next whether Dum’s friend is helping him or about to kill him or both.

There’s a gang of bandits, a corrupt police captain and something about Dum getting kicked out of university, going home and finding his family murdered. The story flashes forward and back; Dum sometimes stands arms akimbo before a lurid neon sky like a Douglas Sirk finale and sometimes blasts twenty villains out of tree-tops and barn-windows with his totally inappropriate World War I six-gun. He does trick shots, too, and the director stops the film and offers us slo-mo replay of the best. After Dum shoots, we get mad super-close-ups of steam rising from his smoking-hot gun. It’s Thai, so if there’s a metaphoric resonance in that shot beyond what a dumb Westerner might assume, I can’t suss it. In other words, if the gun represents more than a dick, its meaning/significance/whatever beats me. This is true of almost all the symbolism in the film; it’s so juvenile it’s profound.

If Ken Russell re-made Andy Warhol’s Lonesome Cowboys with Nicholas Ray on acid and Busby Berkeley, the result might be Tears of the Black Tiger. The style, setting, dialogue and action combine West Side Story hyper-stylized movements, Rebel Without a Cause Technicolor wide-screen adolescent longing, Sergio Leone close-ups and music, manga frame-composition, hallucinogenic colors turned up to eleven and an amphetamine camp surrealism that’s all the more dislocating and hypnotic for its utter conviction.

The chaos of the story-line reflects the director’s passion for the Western film motifs he celebrates even as he eviscerates them. Because everything is so stylized, the most powerful emotion that comes through is the director’s joy in making the film. And no matter how anarchic the plot, that joy keeps you riveted. It looks amazing, every second , and is as sweet as it is fun.