Chris Marker’s latest film, The Case Of The Grinning Cat, was originally released in France in 2004, and played in last Spring’s Tribeca Film Festival. In it, the 85-year-old filmmaker responds to current events: France’s presidential elections, the war in Iraq, and how the youth of Paris dealt with it all. The Case is framed around the search for the mysterious origin of graffiti whose main image is one dear to Marker’s heart: cats. This quest allows the director to maintain his voice, critique, and sense of activism in a new political age, an age where he is no doubt dissatisfied with recent elections and foreign policy. Wandering the streets in search of a response to the current state of the nation, Marker finds himself taken by these unexplained images of cats, which, for him, must be connected to political discontent. 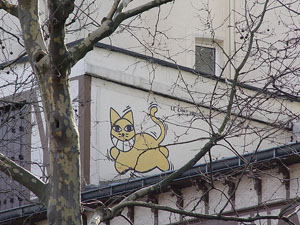 The Case Of The Grinning Cat is the latest entry in Marker’s 50-plus year career as a filmmaker, essayist, poet, critic, novelist, and photographer. It helps to regard the film in reference to a half-century’s body of work and accomplishments. Grinning Cat comes from an artist who continually challenged himself to make sure his mastery of craft—which could range from ground-breaking to mesmerizing—never overshadowed the work’s content, which was often political with an unapologetically subjective commentary (and a love of cats).

Chris Marker worked on the 1955 landmark, Night And Fog, though he never achieved (or wanted) the fame of his former collaborator Alain Resnais. Marker played a large part in conceiving and crafting the film, but preferred to be credited humbly as its “First Assistant Director”. Marker is nowhere near so well known as Jean-Luc Godard, who Marker worked with on 1967’s collective omnibus film Far From Vietnam. The film—France’s response to Vietnam—was conceived, organized by, and eventually edited by Marker. But, believing in the collective, Marker insisted its participants to be credited equally (including Joris Ivens, William Klein, Claude Lelouch, Resnais (again), and Agnes Varda).

Marker’s desire for anonymity is second only to his legendary demand for privacy. Avoiding all publicity relating to his work, he’s conducted only a handful of interviews in the last 50 years, and the long-time photo of himself released to the press was in fact an image of his cat, Guillaume. As admirable as this modesty may seem, knowledge of the director is currently limited to academics, critics, and film buffs. To give a sense of the abyss Marker’s oeuvre has been cast into, there are currently no commercially available DVD’s of his films in the US, where screenings are rare, and retrospectives even rarer. Those interested will find themselves at specialty libraries or archives, hunting down unauthorized bootlegs, or buying long out of print and expensive VHS tapes of his 2 most famous works, La Jetee and Sans Soleil.

La Jetee, the 1962 film for which Marker is best known, is a 27-minute sci-fi masterpiece. Made up entirely of still shots and narration, the short follows a man in post-apocalyptic France forced to be a guinea pig in time-travelling experiments, and the woman he meets along the way. (Later famously adapted and expanded by Terry Gilliam for 1995’s 12 Monkeys—Marker to Brad Pitt in 3 steps!). While as good an example as any of Marker’s experiments with form, and his preoccupation with the relationship between Memory, Image, and Word, the film is atypical in that it is Marker’s only scripted, fiction-based work. La Jetee also offers no indication of the type of political “essay filmmaking” Marker would commit himself to over the course of his career.

His masterpiece, 1982’s Sans Soleil, is the definitive “film essay”—a form which Marker should be given credit for creating, defining, and perfecting. In it he takes on Image as Memory (or was it memory as image?). An assault of photography from most of the world’s continents, combined with and juxtaposed against a relentless commentary, Sans Soleil gives us far more information than we can handle or digest. We find ourselves struggling to keep up, our intellectual storage cache way overloaded, wondering if we remember what happened 10 minutes before. The end result isn’t one of combative frustration, however, but rather the sense of being dazzled by the effortless fluidity of Marker’s wit, transmission of ideas, and singular approach to image collage and narrative. Think Koyaanisqatsi, made the same year, only with content. Or, if not content, with a French, communist sympathizing intellectual musing on whatever he wants to muse on.

Marker’s third great work is his 4-hour Le Fond de L’Air Est Rouge/A Grin Without A Cat, made in 1977. Here he deals with Image as History, in the process reassessing the revolutionary Left’s development and ultimate defeat in the ‘60’s and ‘70’s. Framing the narrative around clips taken from Sergei Eisenstein’s 1925 film, The Battleship Potemkin, Marker takes on Vietnam, Cuba, Latin America, and his own France. He never stumbles, always maintaining his cool. Easy to overlook when thinking of Marker’s work is how fun it always is, filled with an energy and affection directed towards its subject—not always easy to come by with the territory Marker mines.

The Case Of The Grinning Cat (with its title an obvious nod to A Grin) shows a man in his eighties no less politically engaged, no less willing to experiment with narrative structure, no less interested in the latest technology and adapting it to his lifelong commitment to the film-accompanied-essay. Self-consciously playful and not afraid to go on tangents, Marker shifts in and out of direct political commentary and “back to the friendlier world of cats.” If A Grin Without A Cat is Marker’s personal struggle to make sense of the end of the revolutionary Left, this is its postscript. A quarter of the former film’s length, shot on the cheap with DV, and edited by Marker on his home computer (how he’s worked almost exclusively in recent years), this by no means a masterpiece, nor is it trying to be. It is merely a continuation to Marker’s peerless body of work.

Included along with the film are 5 shorts devoted to animals, linked together by the distributor as “Chris Marker’s Bestiary.” Titles include: Cat Listening To Music, An Owl Is An Owl Is An Owl, Zoo Piece, Bullfight In Okinawa, and Slon Tango.

Matt is currently putting together a book of interviews, On Political Film.

Bohumil Hrabal's All My Cats

In Bohumil Hrabal’s memoir All My Cats, the limits—of empathy, of understanding, of life and death—are distended as Hrabal attempts to chart and to pilot the intense disgust he feels for a life that has, in his eyes, necessitated an outcome of violence.

Placenta in my Freezer: A New Mother’s Unexpected Case for Craft

Theater artist and professor, Emily Kitchens examines how her journey through childbirth is the theatrical experience of a lifetime.

Are All Artists Mystics?
The Case of Leonardo da Vinci

There has always been another image of Leonardo, one that associated him with hidden things, esoteric knowledge beyond common perceptions.