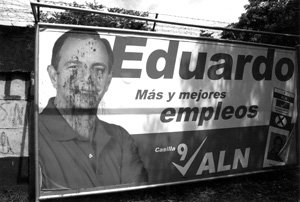 The night after election day, I laid awake listening to fireworks cracking in the distance. The results were almost a week from official. It didn’t matter in the barrio where I stayed in El Viejo. On the dusty causeways, or under the rusted metal roofs, the victor was already known. After losing the presidency in 1990 and abiding 16 subsequent years of neoliberalism, Sandinista Daniel Ortega was elected the next President of Nicaragua.

El Viejo is in the department of Chinandega, in the northwestern corner of Nicaragua. Where dirt floors and open sewers are the rule rather than the exception, the dream of Sandinismo never really died. The Frente (Frente Sandinista de Liberación Nacional, or FSLN) has maintained a strong presence ever since the revolution in 1979 which overthrew dictator Anastasio Somoza Debayle. The Sandinistas built a socialist nation, before they were plunged into civil war by U.S.-funded “Contra” guerillas and were eventually voted out in 1990.

In the city’s cathedral on the Sunday of the elections, the priest (widely known to be a supporter of one of Ortega’s opponents, Eduardo Montealegre) met stiff disapproval from the congregation as he speculated during his homily that the Antichrist would likely come promising “peace and reconciliation,” a slogan from Ortega’s campaign.

On the bus ride back to the capital city of Managua, where I’ve been living since August, a woman exclaimed, “¡Mi comandante es mi Presidente!” In Daniel Ortega, many of the poor here in Nicaragua saw him as their only hope. Of the candidates for President, he still seemed like the one who will actually try to do something for them.

The 2006 election in Nicaragua went almost exactly as scheduled. This fact surprised some Nicaraguans, since Daniel Ortega had always looked strong leading up to his last three losing bids for the top office. In those campaigns, he would poll with a comfortable lead that would vanish come voting time. In this election, by contrast, the pre-election projections wound up being more or less accurate. Ortega received 38 percent of the vote, roughly ten percentage points ahead of his closest rivals, Eduardo Montealegre (who received 28.3 percent) and José Rizo (of the incumbent party, who received 27.1 percent).

Although viewed in the U.S. through the scope of a Leftist resurgence in Latin America, the return of the Sandinistas to the Presidential Palace can be largely attributed to two far less ideological factors.

The first is a split within the liberal (neoliberal) party that successfully opposed the Sandinistas for a decade. In 2005, Eduardo Montealegre left the Partido Liberal Costitucionalista (PLC), party of the current and previous presidents of Nicaragua. He formed the Alianza Liberal Nicaraguënse (ALN) in response to the fact that former President Arnoldo Alemán remained head of the party even after being found guilty of embezzling public funds. The PLC ran Rizo. Although individually, each candidate was comfortably defeated by Ortega, it should be noted that a majority of voters still supported liberal candidates. 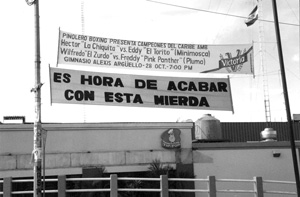 “It’s time to put this shit to rest.” from an MRS banner, Managua, Nicaragua

This became important due to the second attribute of the Frente’s triumph. In 2000, a pact between the FSLN and the PLC altered the requirements for victory in a presidential election. First, they lowered the percentage to win on a first ballot from 45 percent to 40. Then, it was determined that a candidate can win with a minimum of only 35 percent of the vote in the first ballot provided the margin between the first and second place candidates is greater than five percent. Otherwise, a runoff election is called for. Ortega would not have won outright under the old rules and it is easy to project he would have had difficulty fending off a united opposition on a second ballot.

But the numbers in no way recorded the passion of the voters. On the Wednesday night before the election, the capital was nearly choked to a standstill as FSLN partisans took to the streets on the country’s last legal night of campaigning. At midnight, a blackout that included television, radio, and live rallies would begin, meaning that everyone wanted to rally their supporters one last time. I saw supporters for each of the major candidates, but nothing compared with the boisterous Frente. Pickup trucks with screaming youth waving the red and black Sandinista flag, grown men decked head to toe in the party colors, public buses transformed into organic billboards declaring Ortega. And throughout, the FSLN theme song, set to the tune of John Lennon’s Give Peace A Chance, “Todos queremos, trabajo y paz…”(“All we want is work and peace”).

In fact, if there was anything particularly striking about the election of 2006, it was this infectious song and the campaign it symbolized. The Frente ran an extremely sophisticated, and yet by standards of the United States, very old-fashioned campaign. To the tune of John Lennon, the Frente did in the beginning of the 21st century what John F. Kennedy and Frank Sinatra did in the middle of the 20th. Under the direction of Ortega’s wife, Rosario Murillo, who acted as campaign manager, the Marxist primary black and red were updated with seafoam green, fuchsia, and yellow with clunky fonts on bright campaign posters and billboards posted all over the country.

It is difficult to determine the effect that these posters had on the voters, but the ALN and PLC’s billboards with their pasty faced candidates doing their best impression of corporate casual weren’t exactly compelling competition. In contrast, Daniel Ortega stared triumphantly into the future. Another poster echoed national hero Augusto Sandino, the revolutionary who led a rebellion against U.S. marines stationed here in the 1920s and ’30s, and the namesake for the Sandinista Movement. The FSLN crafted the aesthetic of hope and a new direction. 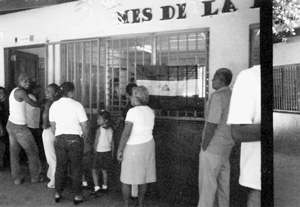 This new direction is the big question mark in just about everyone’s mind. Land speculators from the U.S. who looked to make a killing building mansions for retirees on the Pacific coast and around Lake Nicaragua worry that Daniel will reclaim their land. Meanwhile, many progressives in Nicaragua actually maintain that Ortega will do very little, believing that since leaving office he has traded his revolutionary idealism for political power.

Sandinismo indeed suffered an ideological split in the mid-1990s. The Movimiento Renovador Sandinista (MRS) had run opposition candidates in the past, but since 2000, it allied themselves with the FSLN in national and municipal elections. This alliance broke down when the MRS put forward Herty Lewites as a presidential candidate for the FSLN earlier this year. Lewites and his supporters were expelled from the Frente, and Lewites ran under the MRS orange and black. In July, he unexpectedly died of a heart attack, and former vice-presidential candidate Edmundo Jarquin ran in his place.

Although not particularly significant at the polls (Jarquin received only 6 percent of the vote), the movement’s partisans consider themselves the true Sandinistas, often disparagingly referring to Ortega’s supporters as “Danielistas.” Progressives watching from afar might want to examine the MRS grievances before lauding Ortega as hero of a new international Left. Specifically, on the issue of women’s rights, the FSLN has become quite conservative.

One perceived example of this is the FSLN’s support of a recently enacted ban on therapeutic abortions, or those performed when a woman’s life is in danger. The vote in the assembly came just two weeks before voters went to the polls nationwide. This move now makes abortion completely illegal in the country. Catholic and evangelical churches pushed for the measure and were supported by four of the five presidential candidates, including Ortega (but not Jarquin). Most observers say that Ortega favored this measure in order to garner support from the Catholic hierarchy, who in the 1980s were often opponents of the Sandinistas. 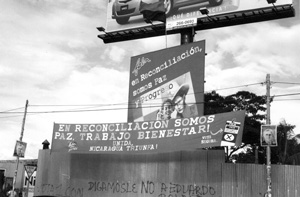 Despite early hostile attempts to scare the Nicaraguan electorate away from Ortega, U.S. Assistant Secretary of State Thomas Shannon was quoted as seeking an “open and fruitful” and “respectful relationship” with the new Sandinista administration. Ortega, in his turn, has vowed to work with the U.S. and organizations like the International Monetary Fund.

On the populist side, Ortega’s election brought promises of cheap oil from his friend Hugo Chávez. As a result, one morning I got on the bus and was pleased to learn that the fare had dropped from 3 cordobas to 2.50. The difference, which amounts to roughly nine U.S. cents, may be a harbinger of more dynamic things to come or just the first bucket of populist whitewash. Ortega’s campaign rhetoric does make him obligated to produce more than words.

For days after the election on the streets of Managua, there was an undercurrent of celebration. You could hear the Frente’s song wafting from the pulperias. Occasionally, a blur of red and black flags might drive by. Reality may not be able to approach this vision. Ortega is potentially too flawed and compromised to make the dreams he has come to embody for the poor come true. His programs may bring little real change to this nation. But in a way that is almost beside the point.

Sandino arose in opposition to the U.S. military stationed on Nicaraguan soil. The 1979 revolution overthrew the U.S.-supported Somoza dictatorship. In 2006, Nicaraguans see the old forces wearing different costumes. The military is replaced by the Holiday Inn. The dictator Somoza is replaced by the dictates of the IMF. Nicaragua believes in its own self-determination. The election of Daniel Ortega, with all of its caveats and questions, was an exercise of Nicaraguans’ belief in success or failure on their own terms. As citizens of our own land of the free and home of the brave, I think we should applaud that.

Lontano (“As from a distance”)

Music making is a social activity, and that fundamental feature of touch at a distance is not just a physical realization of socializing, but likely something that motivated early humans to make this thing we now call music, a social desire for connection that brought about an enormous evolutionary step.

Printed Matter has something of a legendary origin story, equal parts oral history, hearsay, and gossip, passed down through the decades in letters, postcards, photographs, and artist accounts. The exact series of events remains a bit murky—nearly all the early participants claim status as an originator.