Satan played a starring role on the world political stage during 2006. His presence was felt from the Persian Gulf to the banks of the Mississippi. Other than the devil’s handiwork, how else to explain why Iraq became hell on earth, and New Orleans remained in tatters? 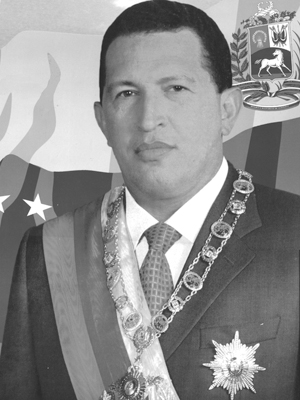 As the Middle East slid into chaos, the world ignored Darfur, and the polar ice caps’ melting accelerated, 2006 indeed seemed like a banner year for Beelzebub. But it was also the year in which he was finally unmasked. And when it happened, his face was so familiar that the only real shock was how long people had mistaken him for Alfred E. Newman.

The moment of recognition occurred, of course, on September 20, 2006, when Venezuelan president Hugo Chavez addressed the United Nations. As he held up a copy of Noam Chomsky’s Hegemony or Survival: America’s Quest for Global Dominance, Chavez declared:

The first people who should read this book are our brothers and sisters in the United States, because their threat is in their own house. The devil is right at home…The devil, himself, is right in the house.

And the devil came here yesterday.

As pure political theater, Chavez’s act was brilliant, worthy of a Tony.

The statement was so forcefully dramatic, perhaps, that many carefully stage-managed American politicians, led by Nancy Pelosi, rushed to condemn Chavez. Their anger thinly concealed their envy of a man allowed to speak the truth without first having to seek permission from an army of consultants and focus groups.

The outrage against Chavez centered on his reference to “smelling the sulfur,” which made the devil less of a metaphor than a fact. But how can the rest of us who were not at the U.N. that day know for certain how the podium smelled? Are we to trust Chavez or the defenders of George W. Bush?

In any case, few have paid attention to Chavez’s subsequent remarks that day, which offered further insight into the present world condition. According to Chavez, Bush, “the gentleman to whom I refer as the devil, came here, talking as if he owned the world.” Though it was far down on his original list of reasons for invading Iraq, Bush had tried to make his case to the U.N. for the spread of democracy. A noble goal to be sure, but as for what that meant in practice, Chavez asked, “What type of democracy do you impose with marines and bombs?”

The answer seems to be the chaos that is Iraq.

By contrast, consider the democratic success of Venezuela itself, where Chavez was recently reelected with more than 60% of the vote. The U.S., which had supported both the failed 2002 coup against Chavez as well as his most recent opponent, thus suffered another setback. “It’s another defeat for the devil, who tries to dominate the world. Down with imperialism,” said a triumphant Chavez.

How far Chavez’s Bolivarian revolution will go is an open question. Tariq Ali, author of the excellent new work Pirates of the Caribbean, believes that his next term will be “radically redistributive.” But as the Latin American scholar Steve Stein reminds Chavez specialist Nikolas Kozloff in these pages, the level of such redistribution depends on future oil prices.

In terms of his influence over Latin America, there is no doubt. His support has directly affected the outcomes of elections in Bolivia, Ecuador and Nicaragua; he has close ties to several other leading nations in the region, notably Argentina and Brazil; and like his hero, Fidel Castro, Chavez has now created a model (in this case, a democratic one) that now fundamentally shapes all politics, left and right, in Latin America.

Despite the best efforts of the U.S. media, Chavez continues to win the war of public opinion. His “petro-populism” will make an impact here in the U.S. again this winter, as Venezuela provides home heating oil (at a 40% discount) in 16 states, from Alaska to our own Bronx, and to 163 Indian tribes. According to Tariq Ali, Chavez’s popularity is rapidly growing in the Middle East as well, a region better known for its “petro-fascist” regimes.

Chavez is not perfect, and his silence regarding the anti-Semitism of his OPEC ally Ahmadinejad in Iran is quite troubling. But like John Murtha last year, Hugo’s actions have shaken up the world. That fact alone could merit this year’s award, but in many ways, the U.N. speech carries the day.

For calling out the Prince of Darkness, Hugo Chavez is the Brooklyn Rail’s person of the year for 2006.

Run Me To Earth

Paul Yoon’s new novel, his second, Run Me to Earth, takes place during the Laotian Civil War. While the Vietnam War rages on, Laos is engaged in a civil war between the Soviet-supported, communist Pathet Lao and the American-backed Royal Lao Government throughout the 1960s and early 1970s.

As the World Burns

Tom Motley is a cartoonist, illustrator, and educator. His publications include Tragic Strip (a monthly strip in the Brooklyn Rail), The Golden Ass, The One Marvelous Thing, and contributions to the indie anthology Cartozia Tales. He teaches cartooning at the School of Visual Arts and illustration at Pratt.