Rarely do I see a performance that is clean and well crafted, without being pretentious and contrived. Lionel Popkin’s premiere of Miniature Fantasies, an evening-length trio inspired and shaped by Indian Miniature Painting and presented by Danspace Project at St. Mark’s Church in November, was just that, an accomplished rarity. 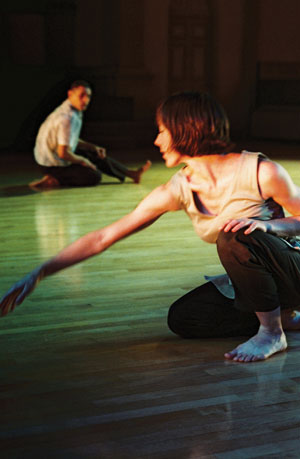 Performed by Popkin, Jennifer Dignan, and Carolyn Hall, and set to an original score by Andy Russ, the piece included an assortment of Indian Miniature slides from the ragamala series—a folio of paintings from the early 1600s—projected on and around the stage. The dancers, who manipulated the projectors throughout the evening, performed to and with the images. During one of Popkin’s solos, he danced across an illustration of a man on a horse, his movements aggressive and bellicose; while in another, he pressed a button that frantically changed slides projected across his chest. As Dignan performed her solo, a sweet tribute to the slide of a man, Hall bounced the projection above Dignan’s head as she jumped, creating the illusion that Dignan flung the intangible image with her own corporeal self.

According to Popkin, he intended for the slides projected into space to be “more than a backdrop of history for us to be framed by,” and to “overlap with the structure of the space, the dancing and the dancers in much the same way that our pasts and presents messily co-exist within ourselves.” At times, the dancers’ shadows across the back walls acted as a sort of projection, thereby incorporating them into the two-dimensional miniature world and effectively corrupting the boundaries between stage, props, performer, and observer.

Although the shapey quality of the choreography mirrored the stillness and two-dimensionality of the slides, the movement was neither staccato nor choppy; on the contrary, it flowed rather dreamily. While all three dancers were crisp and sure on their feet, even during the most precarious moments, the movement seemed muddled by Popkin, yet fully realized in the women. I was most taken by the intricate partnering, where the theme of boundary corruption played out through manipulations of touch, mimicry, and instigation. Overlapping their bodies, the dancers framed each other, one moving, even carrying his or her partner—obfuscating the source of initiation, making me question who was active and who was passive. While the power dynamic was ambiguous, their connection was thoroughly intimate. They would kiss each other’s feet, or slide their faces along the right-angled frames formed by their partner’s arms, reflecting the intricate and convoluted nature of their relationships with their projected miniature partners.

After the performance my friend who accompanied me brought up the question of “neutrality.” Bothered by the stylish women’s costumes—feminine halter-tops with wrap skirts in embroidered fabrics—and cool haircuts, she felt they presented themselves as women first and dancers second, rendering the movement subordinate to the individual. For me, the issue was settled in the first moments of the piece, when the dancers sat in square pools of light gyrating toward the audience, acknowledging the communal aspect of their intention: we were in this together, sharing the moment as human beings instead of playing the dichotomous roles of performer and observer. With soft gazes the dancers actually looked at the audience and the space around them; they looked at each other as individuals and not as movement cues. This lack of a fourth wall, a refreshing and comforting refusal of formality, was fully realized at the close of the piece when the dancers swam the projections across the audience, incorporating us into their world. As moving as it was to have my face caressed by the slides, to question whether I was the image, the frame, the set, or the performer, I wondered whether or not “lovely” was enough. Regardless, the performance itself was indeed lovely.

Mark Laver’s Within at Ricco/Maresca approaches the landscape through a radical subjectivity that blurs the boundary separating nature itself from our perception of it.

Waking From the Dream of Mark Leidner’s Poetry

The title of Mark Leidner’s new gorgeously made book Returning the Sword to the Stone is apt. Like a reverse Arthur Pendragon, we decide not to go for the holy grail, not to accept our righteous lineage, and maybe not to pursue a noble quest in human development but stay home and continue “whipping ourselves with Christmas lights” and theorizing about why we do it. We’re considering our crazy human condition and laughing at our own limited idea of ourselves.

The questions of what constitutes art and who gets to decide have gnawed at me for years. Mark Haber’s second novel, Saint Sebastian’s Abyss, addresses these same concerns in ways I wish I had thought to do myself.