“Now!” whispers Molly Poerstel to her fellow dancers, a voice of conscience. “Now!” she repeats, a meditation on the moment’s urgency. “Now!” there is potential for change. “Now!” her fist raised in the air. This electric exigency pulses throughout David Dorfman’s piece, Underground, performed at BAM in November, and inspired by the revolutionary activity of the Weather Underground during the ’60s and ’70s. Dorfman’s latest work emphasizes the persistence of the daily, moment-to-moment act of choosing your politics through a kind of kinetic diplomacy. 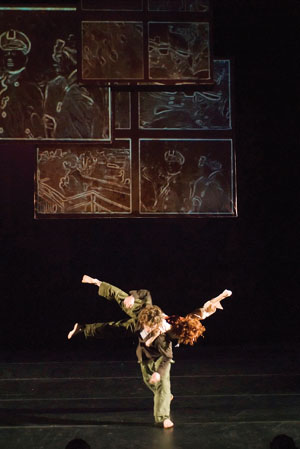 “What should I do?” asks Jennifer Nugent. “Should I … ” She drops to the floor in a violent, screaming solo. The blood rushes to her face as she angrily flips in the air, thrashing her arms and legs in the penultimate temper tantrum. “Or should I … ” This time, she whines and moans, wriggling on the floor—two representations of inactive reactions, which accomplish little, if anything.

Viewers are inundated with an explosive, pulsating sound score by Jonathan Bepler; swarms of dancers charging through high-intensity unisons; and quick flashes of graphic images from the ’60s and ’70s projected onto the scrim. The most stunning collaboration between video and live movement occurs during a duet between Heather McArdle and Joe Poulson. Overhead, a screen projects violent images from demonstrations, which eerily mirror the movement of the dancers. A policeman drags a protestor away from a crowd by the shoulders as Poulson does the same to McArdle. Paradoxically, the dancers inflict force on one another, though it seems to emerge from a sense of comradery or desire for peace rather than a desire to control.

Dorfman’s piece attempts to inspire activity, but it is unclear what kind of activity he hopes to inspire. In a solo, he reminds us of the way the Weather Underground brought the Vietnam War home by blowing up two dozen public buildings without killing anyone as he pantomimes throwing rocks into the audience. The movement leads to a question. Ask one question and it inevitably leads to more. Is it okay to take the lives of 10 people if it saves 26? Is your country worth killing for? How about your family? Is anything worth killing for? Is any war a just war? In a violent world, is it possible to fight for peace? Is it possible to fight with peace? Can you do anything to make a difference? What would you do? Is change really possible? What is change? What is revolution? Dorfman is not calling on us to use violence. What Dorfman’s luscious, wafting movement inspires is just that: movement, shift, change through the act of questioning.

In many of Dorfman’s works, I have recognized his willingness to be naïve, to ask the simple questions. The questions we all assume have been answered. The ones we believe we know the answers to, until they are asked of us. In Underground, Dorfman has found necessity in returning to the essential questions of violence and war, the answers to which have possibly changed over time. Is it wrong to kill? I know it used to be frowned upon, but I’ve been reading the news, and it seems like maybe it’s okay now. So, is it still wrong to kill? One thing is certain—it does not hurt to ask.

If you think yourself immune to the seductions of visual propaganda, go check out the current Met exhibition, The Medici: Portraits and Politics, 1512–1570. It will test you.