Claude Wampler’s Performance(Career Ender) is one of those shows that comes along every once in a great while and makes you reassess the whole nature and purpose of performance. It is as aesthetically and experientially provocative as it is grounded in performance and media theory. It’s the stuff of dissertations. 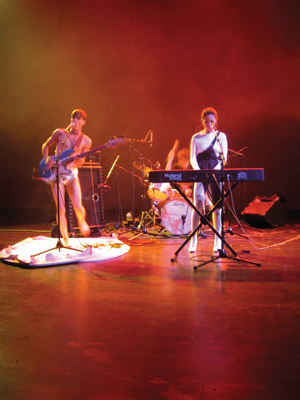 If this is indeed the last work of her performance career, it is both a fitting summary and a logical conclusion. All the Wampler hallmarks are here. Notions of presence and absence. The disappearance of the artist. And audience plants —oh the audience plants. Any number of them are scattered throughout the crowd. A spastic young man in the front spends the entire performance obnoxiously rocking out on his “air drums.” A woman offers candy to those around her. Another woman in the back row laughs too long and too loud at every on-stage provocation. A young man carrying a very large sculptural hobo-bindle meanders through the crowd searching for a seat. Entire portions of the audience disappear by walking out of the show.

Wampler’s mixing of the live and the mediated is also a big part of this performance. In the middle of the stage stands a drum set, a keyboard, and a cardboard sculpture onto which is projected the image of a bass guitar and large amplifier. Eventually, the video begins and this signals the beginning of the show. The projected images of local rock upstart John Carpenter (bass guitar, lead vocals) and his two band mates, Joey Albanese (drums), and Debbie Chou (piano), permeate through the dense smoke coming from the fog machine. The spatial configuration of the onstage objects (drums, keyboard, cardboard sculpture) creates a visual harmony with the projection—the mediated “on-screen” objects align precisely with the actual on-stage objects. The intermittent vapor allows the projections to become completely three-dimensional, giving the band members a ghostly translucent life in spite of their physical absence.

The video shows the band rehearsing a new song. We get an insider’s view on the art-making process: the sparks of ideas, the missed harmonies, the boredom, the goofing off, the improvisations, the la-la-las that substitute for eventual lyrics. We also see John Carpenter, who begins the rehearsal session dressed in a nice white suit, strip down to silver underwear. The band runs the song multiple times, each time improving. On their final run-through they are firing on all cylinders. The song is completely infectious and ultimately worth the 40-minute journey it took to get here. With the final bass guitar burst they leave their instruments and walk off camera. The exit is met with applause. Yet the audience still feels unfulfilled. They want the band. And they want them live!

When the actual band eventually comes on stage they receive an outrageous ovation. And why not? They’ve created a built-in fan base. They step up to their instruments and proceed to bring the house down. The audience claps, stomps the bleachers, dances in their seats, and sings along (by now they know every word). The audience screams encore, but there is no other song for them to sing.

When was the last time an art performance invoked this much vitality in the audience? If this reaction has been what Wampler’s art has been searching for, then it explains why she has appropriated rock & roll. It also explains why she has chosen to do this—performance—to performance. Rock’s ability to induce sensorial immediacy and sensorial overload is something that dance, theater, and visual art performance cannot easily or adequately duplicate. The cultural currency value of rock music is something that performance cannot compete against. It exhausts itself in the attempt. Performance, as Wampler has so teasingly pointed to, ultimately gets crossed out.

from PERFORMANCE STUDIES (“TO BE TRANSFORMED”)

Lara Mimosa Montes is the author of THRESHOLES (Coffee House Press, 2020). She is a senior editor of Triple Canopy. She was born in the Bronx.